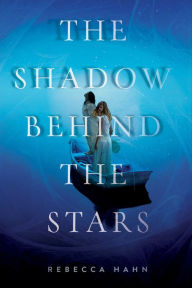 My name is Chloe, and I am the youngest. Mine are the fingers that choose the wool, that shape the thread, that begin it. The sun smiles upon me. Men love me without knowing who I am. I have lived forever and will live forever more.

Can an immortal goddess who has existed since the dawn of time be the central figure in a coming-of-age story? In The Shadow Behind the Stars, Rebecca Hahn’s sophomore novel, that’s exactly what happens.

Chloe, Serena, and Xinot are the three fates that spin, measure and slice the threads of human life. For centuries they have lived isolated on their island, away from human contact (but for the odd recalcitrant hero who shows up unannounced to question their fate), content with their continuous spinning-measuring-slicing.

Until Aglaia. The girl who survived a horrible plight and made her way through sun and rain and tears and pain to get to their island to ask the three sisters: how do I go on?

And here is a fact about the fates: they might say they are apart and unconcerned and indifferent, but these are half-truths. Chloe knows this too well after witnessing the way Serena and Xinot on a couple of different occasions have almost failed their duty. But not her, not Chloe, for she has stayed true and on course.

Until Aglaia. The girl who changes everything.

The Shadow Behind the Stars is a cautionary tale that Chloe, the youngest sister, addresses to us mortals. It’s not a story about “what happens next” but a tale that spins, spirals, reveals, and explores ideas of immortality versus mortality and fate versus free will in a beautiful, profound, harrowing look at what it means to be human from the perspective of someone who isn’t. It’s a great, tricky narrative choice but one that fits the subject and the premise perfectly. Chloe, Serena, and Xinot were formed (not born) at the same time and technically have the same age but they are more than age and time—they are embodiments of ideas and the archetypes of the maiden, the mother, and the crone. Or youth, maturity, and death.

In that way, Chloe is the perfect choice as narrator in a YA novel—even though she is an immortal goddess who has lived forever, she is still the embodiment of youth. Her narrative is absolutely spot on in the way that it shows unrestraint, passion, and recklessness that’s often at odds with her primal power. So, yes, it’s a coming-of-age tale because it’s finally Chloe’s time to undergo the same process and evolution as her sisters but without losing sight of the dual aspects of her being.

And just like in the author’s debut, A Creature of Moonlight, The Shadow Behind the Stars deals primarily with stories of women: stories told by women, experienced by women, and lived by women. It focuses on sisterhood, friendship, and I’d even go as far as to say on queer love, too. It’s a Greek tragedy that tugs at heartstrings and leaves one yearning for more thought-provoking stories in the same vein.

A Creature of Moonlight wasone of my top 10 books of 2014, and with this novel, Hahn firmly establishes herself as one of the strongest voices in feminist, thoughtful YA.