Spooky Horror Reads to Spice Up Your Nights 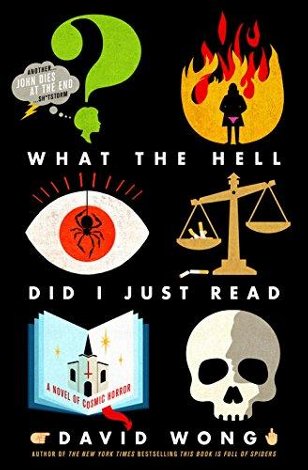 Halloween is lurking just around the corner and, as a reader, that means an inexplicable desire to consume more horror fiction than usual. There's something about reading unsettling stories late at night that just feels right this time of year. Feeling the same urge? Check out some of these recent horror titles…

Bubba and the Cosmic Blood-Suckers by Joe R. Lansdale

If your taste in reading leans towards the weird, you'll want to know about Joe R. Lansdale's gonzo tale of secret government organizations and monsters. You may recall the film Bubba Ho-Tep, based on one of Lansdale's stories, in which two elderly men—Sebastian Haff, who claimed to be Elvis Presley, and another man who claimed to be John F. Kennedy—fought a zombie in an East Texas nursing home. Bubba and the Cosmic Blood-Suckers is the just-as-wonderful prequel story. This time, Elvis and a group of hardcore warriors, assembled through a secret department within the government, fend off an invasion from shape-shifting vampire-like creatures who emerged from a dark dimension to take up residence in a New Orleans junkyard.  Like you do.

Shirley Jackson is considered a queen of American gothic horror. Now readers can see why in Dark Tales, a first-ever collection of Jackson's scariest stories. These seventeen tales are notable for their realistic depiction of our everyday world, which makes the ensuing terror that follows all the more unnerving. You'll read about a 15-year old girl whose ominous prophecies fall on the deaf ears of adults; a loving wife who nevertheless holds homicidal thoughts; a modern-day Jack the Ripper who preys on young girls; and the housewife who picks up her husband from the train station only to realize he's a doppelganger.

English horror fiction writer Ramsey Campbell has been scaring readers for more than fifty years with novels like The House on Nazareth Hill and short fiction collections such as 1979's Demons by Daylight and 1985's Dark Companions.  To commemorate that accomplishment, editors Aniolowski and Pulver have assembled the tribute horror fiction anthology Darker Companions. The twenty contributing authors serving up the scares include Steve Ransic Tem, Alison Littlewood, Marc Laidlaw, Damien Angelica Walters Kaaron Warren, Jeffrey Thomas and Lynda E. Rucker. Each was asked to wrote a story in spirit of Campbell's writing, which is to say they are most definitely off-putting in the best possible way.

The Exorcist by William Peter Blatty

If you are looking to wrap yourself in a certified horror classic, The Folio Society edition just delivered the goods with their stunning edition of The Exorcist, William Peter Blatty's chilling account of a young girl possessed and the group of people who try to save her. Like all of The Folio Society's books, this upscale printing will satisfy even the most demanding reader. The clothbound book comes in a sturdy slipcase and includes thirteen truly creepy full-page illustrations by acclaimed artist Jeremy Caniglia. This is a perfect gift for fans of the current television show or, if you're like me, have finally worked up the nerve to read it after seeing the terrifying 1973 film.

The rising tension is palpable in this psychological horror.  Four best-selling horror authors are invited to spend Halloween night in a supposedly-haunted house in Kansas—a cheap publicity stunt conceived by an Internet mogul that takes a much darker turn than any of them expected. The house, it appears to their suddenly-sobered guests, appears to be occupied by an unseen entity that can peer into their souls. Although nobody comes to any physical harm that night, over the course of the following year the writers' lives are increasingly turned upside down. To break the spell, the tormented authors must return to that same haunted house and confront the spirit that has only begun to make their lives hell.

The premise behind The Lovecraft Squad asks: what if the eldritch horrors written by H.P. Lovecraft were actually real? The answer is that a top-secret group of federal investigators would be assembled to explore Lovecraft's so-called fictions and use them as the basis for fighting horrific, otherworldly creatures that – surprise! – actually do exist. Their pulpy exploits across the decades are explored in the shared world anthology created by Jones. Among the things you'll see: the Squad's first agent going up against gangsters in late 1930s New York, only to discover more unearthly threats under a Broadway theater; a dream thief terrorizing a small town during the Korean War; and a 1963 mission to save Yuri Gagarin from falling prey to the "colour out of space".

The Rains by Gregg Hurwitz

In this young adult thriller, Hurwitz uses his Hollywood eye to reimagine the zombie novel with cinematic flair. The peaceful community of Creek's Cause changes overnight when an asteroid drops out of the sky. Alien spores from the asteroid transform everyone over the age of eighteen into zombie-like hosts. 15-year-old Chance Rain and his 17-year-old brother, Patrick, find out the hard way—they are attacked on their way to school where they meet other young survivors who are hiding there.  Together, Chance and Patrick become humanity's last hope of survival. But the clock is ticking! Patrick is two days away from his eighteenth birthday.

What the Hell Did I Just Read by David Wong

If you like a little comedy to soften the blow of a scary story, then consider reading Wong's third entry of his black-humored thriller series John Dies at the End. This time, Dave, John, and Amy—our paranormal butt-kicking protagonists—investigate the kidnapping of little girl perpetrated by a shape-shifting interdimensional being. But, as so often happens, one thing leads to another and, well, let's just say that by the book's end, you'll realize why it lives up to its claim of being a novel of cosmic horror. But you'll also have lots of laughs along the way.

The Folio Society edition of William Peter Blatty's The Exorcist illustrated by Caniglia is available exclusively from www.foliosociety.com/exorcist