Spring Into Some Fantastic Fantasy Reads 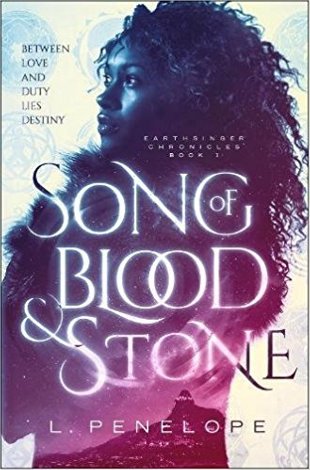 In case you haven’t heard about Song of Blood and Stone (Book One of the Earthsinger Chronicles) from all the authors and reviewers who’ve been buzzing about it for months, let me add my voice in praise of this wonderful novel!

“L. Penelope's Song of Blood & Stone is a treacherous, thrilling, epic audiobook fantasy about an outcast drawn into a war between two powerful rulers.

Orphaned and alone, Jasminda lives in a land where cold whispers of invasion and war linger on the wind. Jasminda herself is an outcast in her homeland of Elsira, where her gift of Earthsong is feared. When ruthless soldiers seek refuge in her isolated cabin, they bring with them a captive - an injured spy who threatens to steal her heart.

Jack's mission behind enemy lines to prove that the Mantle between Elsira and Lagrimar is about to fall nearly cost him his life, but he is saved by the healing Song of a mysterious young woman. Now he must do whatever it takes to save Elsira and its people from the True Father, and he needs Jasminda's Earthsong to do it. They escape their vicious captors and together embark on a perilous journey to save Elsira and to uncover the secrets of The Queen Who Sleeps.

Thrust into a hostile society, Jasminda and Jack must rely on one another even as secrets jeopardize their bond. As an ancient evil gains power, Jasminda races to unlock a mystery that promises salvation. The fates of two nations hang in the balance as Jasminda and Jack must choose between love and duty to fulfill their destinies and end the war.”

The novel is a wonderful addition to the romantic fantasy library. The world building is deeply compelling, and the author’s attention to detail in every aspect of the storytelling landscape is impressive. Yet, like the best of fiction, and especially fantasy fiction, the author raises important social issues, in this case, race, discrimination, treatment of refugees and power, in a spectrum of interesting ways. And, as in the very best of fiction, these elements are woven in beautifully and naturally, making readers infuriated on Jasminda’s behalf and asking them to question the status quo and examine the idea of power. All while keeping us breathlessly turning pages and rooting for Jack and Jasminda every step of the way, as they fight for justice, for peace and for their love.

I can’t wait to see where she takes it next. I loved this book and truly hope you’ll pick it up. It is first and foremost an entertaining, breathtaking adventure—all the other elements are the bright, thought-provoking icing on the cake that enhances the story, making it more powerful, and definitely timely, but never preachy or didactic.

Give it a try. You’ll be glad you did.

And since we’re talking fantasy, one of my favorite ever fantasies, Labyrinth Lost by Zoraida Cordova, is a) on sale right now in e-book for $1.99, and b) will have a sequel (yay!). The second title in the Brooklyn Brujas series, Bruja Born (review here), will release June 5. I just requested the ARC and can’t wait to read it. Kirkus called it “An exciting read with a wonderful Latinx feel woven throughout,” which is the way I feel about Labyrinth Lost. They’re both technically YA titles, but I never felt I was missing any depth or complexity because of it in Labyrinth Lost.

What about you? What are some of your favorite fantasy reads? Or, what are you currently reading?