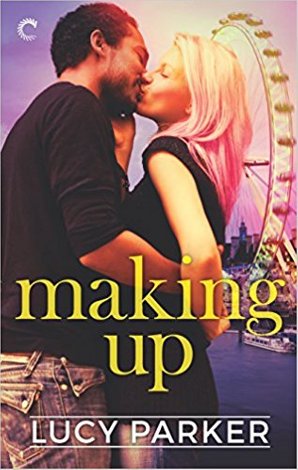 A couple of weeks ago I mentioned that Lucy Parker’s third novel released and I’d be writing about it soon. Well today is the day!

If you haven’t discovered Parker yet, I highly recommend you seek her out. Her characters are witty and compelling, and they always start out hating each other, but then win each other over through a brilliant mix of empathy and backbone, in ways you never see coming.

All three titles are terrific, and are among some of my favorite reads (listens - thanks Harper Audio!) in the past few months.

This one, MAKING UP, features Trix, the best friend of Lily Lamprey, main character from PRETTY FACE.

Once upon a time, circus artist Trix Lane was the best around. Her spark vanished with her confidence, though, and reclaiming either has proved…difficult. So when the star of The Festival of Masks is nixed and Trix is unexpectedly thrust into the spotlight, it’s exactly the push she needs. But the joy over her sudden elevation in status is cut short by a new hire on the makeup team.

To Leo, something about Trix is…different. Lovely. Beautiful, even though the pint-size, pink-haired former bane of his existence still spends most of her waking hours working to annoy him. They’ve barely been able to spend two minutes together for years, and now he can’t get enough of her. On stage. At home. In his bed.

When it comes to commitment, Trix has been there, done that, never wants to do it again. Leo’s this close to the job of a lifetime, which would take him away from London—and from Trix. Their past is a constant barrier between them.

Really fun and lovely reads, all of them.

Do you remember years ago hearing that one of the unwritten romance rules was that any stories set in Hollywood or the entertainment world wouldn’t sell? Well, I’m really glad that one seems to have gone out the window.

On the heels of MAKING UP, I sought out a few titles based in the entertainment world and am happy to say I really enjoyed all of them.

Mia Sosa kicked off a new series, Love on Cue, last fall and the second title, PRETENDING HE’S MINE, released in April. I finally got the time to read the first one, ACTING ON IMPULSE, and it was really cute—and sexy. Rising movie star Carter Stone takes a vacation to Aruba and meets personal trainer Tori Alvarez on the plane. He’s in disguise and likes the way she reacts to him naturally, so he stalls on telling her who she really is. However, when the paparazzi discovers his hideout, she is unamused and flies home asap.  He follows her to Philadelphia and convinces her to train with him, then slowly embroils himself in her life. But her aversion to publicity and his very public life will take some getting used to, and when trust issues rise up, they’ll each have to face some deep insecurities to get to true love.

Tori’s Latinx family and a Hollywood backdrop add flair and depth to a fun, flirty and very sexy love story.  (Kirkus liked it too - read the review here.)

After a very public breakup with a media-hungry politician, fitness trainer Tori Alvarez escapes to Aruba for rest, relaxation, and copious amounts of sex on the beach--the cocktail, that is. She vows to keep her vacation a man-free zone but when a cute guy is seated next to her on the plane, Tori can't resist a little harmless flirting.

Hollywood heartthrob Carter Stone underwent a dramatic physical transformation for his latest role and it's clear his stunning seat mate doesn't recognize the man beneath the shaggy beard and extra lean frame. Now Carter needs help rebuilding his buff physique and Tori is perfect for the job. It doesn't hurt that she makes his pulse pound in more ways than one.

Sparks are flying, until a pesky paparazzo reveals Carter's identity. Tori is hurt and pissed. She wants nothing to do with another man in the limelight, but she's still got to whip him into shape. Can Carter convince Tori he's worth the threat to her privacy that comes with dating a famous actor, or will Tori chisel him down to nothing before he even gets the chance?

If you like domestic thrillers, you’ll want to check out LIES YOU NEVER TOLD ME by Jennifer Donaldson. The tension ratchets up through these two storylines, but there are a few big twists that I didn’t see coming - one in particular that’s pivotal. I really liked this book, though it was definitely more stressful than my typical read. The writing and storytelling were intricate, intriguing and suspenseful, so if you’re a fan of smart, tense thrillers, I expect you’ll love it. (It’s considered YA but the plot and conflicts are definitely sophisticated and interesting enough to keep adult readers engaged. Kirkus’ review - here - was positive too.)

Gabe lives in Austin, Texas, and he still can't believe Sasha, the stunning head cheerleader, is his girlfriend. But their relationship soon turns controlling; if she can't have Gabe, no one can....

Elyse lives in Portland, Oregon, and, as the shy best friend to their high school's theater star, is surprised to be cast as the lead in their production of Romeo and Juliet. It seems the new drama teacher, Mr. Hunter, has taken a liking to her - and as rehearsals wear on, Elyse can't stop thinking about him, either.

Gabe and Elyse don't know it, but their paths are on a collision course. And when the dust settles, not everyone will make it out alive.

Finally, I was intrigued when I read about AMOUR AMOUR by Krista and Becca Ritchie, the first book in the Aerial Ethereal Series, something that sounded a lot like a famous circus/acrobat company that has a ton of shows in Las Vegas. (Circus of the Sun, anyone?)

I have to say that I really disliked the beginning of this book. The main female character did something really annoying/stupid/dangerous, and the main male character came off as a huge jerk at first. I almost stopped right there, but I’m so glad I didn’t. Sexual tension is high and watching Thora and Nik navigate complicated personal and professional conflicts is sexy and touching. Plus the subtle reflection on friends and family and what those mean to the couple is well done and lovely. Definitely worth a read, especially for the unique and fascinating setting that ultimately drives the plot.

The best aerial technique won't land 21-year-old Thora James her dream role in Amour, a sexy new acrobatic show on the Vegas strip. Thora knows she's out of her element the second she meets Amour's leading performer. Confident, charming, and devilishly captivating, 26-year-old Nikolai Kotova lives up to his nickname as the "God of Russia". When Thora unknowingly walks into the crosshairs of Nikolai's after-show, her audition process begins way too soon.

Unprofessional. That's what Nik calls their "nonexistent" relationship, but it's not like Thora can avoid him. For one, they may be partners in the future - acrobatic partners, that is. But getting closer to Nik means diving deeper into sin city and into his dizzying world.

Thora wants to perform with him, but when someone like Nikolai attracts the spotlight wherever he goes, Thora fears that she's destined to remain in the background of his spellbinding show.

I’ve really enjoyed diving into the fun mix of romance and the entertainment industry and I hope you’ll check these titles out (well, a reserved recommendation for LIES YOUR NEVER TOLD ME if you’re not a thriller fan!).

Overall, though, really great reads all of them!