Swords, Sorcery, and a Troubled King 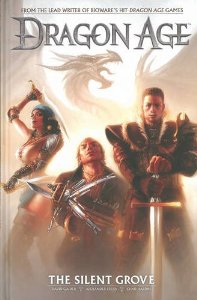 I may have mentioned here before that I’m a bit of a gamer. Played my first video game when Atari was king, and I was working my way BACK through the original Mass Effect game just last weekend. Male Shepherd, kinda going Paragon…shhh! It’s fun. The changes in the quality of storytelling throughout the years has skyrocketed from what it used to be. I’ve always been a fan of RPG or role-playing games, having bought everything from the first Final Fantasy and Legend of Zelda on Nintendo, to Dragon Warrior and Legend of Zelda, Ultima, various Dungeons and Dragons games, all the way up to the Mass Effect games, Elder Scrolls, and a series called Dragon Age.

All of these games have certain things in common. You can customize (some more, some less) your character to fit your tastes or mood, making them male or female, human or nonhuman, fighters, thinkers, some combination of both, good or evil…the list goes on and on. They have immersive worlds and deep histories. You take on the role of a character and move through a story. The more modern games even allow you to move around the world however you choose rather than by following a direct narrative, which can be astonishing and beyond fun.

Which brings me to today’s graphic novel, Dragon Age: The Silent Grove, a one-shot story set in the world of the Dragon Age video games. I spent many an hour playing Dragon Age: Origins when it came out, and this book felt all at once familiar and welcomed when I cracked it open.

Alistair, King of Ferelden, is on the hunt. With the help of a pirate named Isabela and her Dwarf friend Varric, he travels to the city of Antiva and mounts a break-in on the sanctum of The Crows, a powerful order of assassins who (may) have information Alistair wants. What they find leads them to a prison, a secret captive, and sets them on a quest to find The Witch of the Wilds.

If you love a good sword and sorcery tale—and who am I kidding, of course you do!—this won’t disappoint. The characters are familiar, the story engaging. If you’ve played the Dragon Age games, you’ll recognize Alistair as one of the NPCs (non-player characters) you encounter early on. By The Silent Grove, he is King, and the weight of that responsibility weighs on him terribly. Part of the reason he seeks out Isabela, another character from the games you might remember (specifically in Dragon Age II, where she is a NPC who can join your party), and Varric (narrator of Dragon Age II), is to have a little adventure again, relive some of the glory days before he became King.

Alistair feels he never should’ve been King. The illegitimate son of King Maric, his rise to the throne came about only after Maric and his legitimate son, Callan, died. This doubt—and even guilt—is what drives him to question himself and his position as King. Part of this book is about Alistair discovering who he really is, and what he can do and become.

Published by Dark Horse, this is a stand-alone story, though there are other volumes out there you can get and read if you want to keep going. I like how the art delivers on tone, and the clean lines and rich detail stand out in a way that I truly enjoy.

A last word: you don’t have to know the games or have played them to enjoy this book. The world is set up very well in the first few pages and it really does deliver an excellent sword and sorcery tale.