Take a Spin on the Science Fiction & Fantasy Merry-Go-Round! 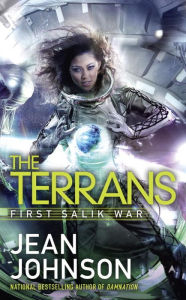 Fans of the science-fiction and fantasy genres pride themselves on labeling stories—not just with the "science-fiction" and "fantasy" labels, but also with any number of subcategorizations within science fiction and fantasy. To sf/f fans, the "science-fiction" and "fantasy" labels are simply too vague. To properly categorize a novel is to tag the bejeezus out of it with subgenre and theme labels like "steampunk," "space opera," "time travel," "superheroes," or "vampires." Does that seem a bit obsessive? Perhaps...but the tags we put on sci-fi are useful in that they ultimately help readers find the exact book they are looking for.

To that end, I present a merry-go-round of new and recent science-fiction and fantasy releases! Just pick a topic and take a spin....

WHAT IT IS: Stories that involve beings who are not human.

RECENT EXAMPLE: The Terrans by Jean Johnson, the first in a new trilogy, is set two centuries earlier in the same universe as her Theirs Not to Reason Why series and explores the First Salik War. Here, Jacaranda MacKenzie, born into a political family and gifted with precognitive psychic abilities, knows that war is coming and is thus pressured into rejoining the Space Force to forestall the impending calamity with a new alien race. (Cross reference: Military Sci-Fi, see below.)

WHAT IT IS: An offshoot of Steampunk (see below), Dieselpunk combines the aesthetics of diesel-based technology from the interwar period between World War I and II, with retro-futuristic technology and postmodern sensibilities.

RECENT EXAMPLE: If you want to capture the flavor (as it were) of Dieselpunk, the go-to book is the new short fiction anthology The Mammoth Book of Dieselpunk edited by Sean Wallace. It features stories by Tobias S. Buckell, Carrie Vaughn, Geneviev Valentine, A.C. Wise, and Nick Mamatas, among others. You can practically smell the diesel fumes.

WHAT IT IS: FTL (Faster Than Light) Travel is a literary device to circumvent the physical limitation of Special Relativity, that is, that nothing can travel faster than the speed of light.

RECENT EXAMPLE: Stephen Baxter's science-fiction stories are always filled with brain-expanding ideas. His latest duology, comprised of Proxima and Ultima, is a good example of this. One of the key ideas central to the novels are alien artifacts that allow humans to move across light-years of space within a single footstep. But that's just the beginning. Wrap your head around this: the story posits that we all have countless pasts that are converging in this present.

WHAT IT IS: Futuristic stories largely characterized by the inclusion of military battles and strategies.

RECENT EXAMPLE: The Trials by Linda Nagata, in which Lieutenant James Shelley and his squad of U.S. Army soldiers must combat a rogue artificial intelligence while they seek justice. This is a military political thriller of the highest caliber.

WHAT IT IS: Less rigorous than hard science-fiction, steampunk stories are set in a (usually Victorian) world where the predominant technology is steam power.

RECENT EXAMPLE: The Rise of the Automated Aristocrats by Mark Hodder, in which Sir Richard Francis Burton must combat a colleague who threatens to change history by distributing knowledge of technology that hasn't been invented yet. Bonus crossover: this adventure also includes time travel (see below).

WHAT IT IS: Stories involving characters capable of superhuman abilities.

RECENT EXAMPLE: In Lexie Dunne's snarky and fun Supervillains Anonymous, new superhero Gail Godwin (aka Hostage Girl, who has the uncanny knack for being captured on an almost daily basis) must deal with an escaped arch-nemesis and being framed for the murder of her trainer and mentor. Except now she's in a prison with the same villains who used to kidnap her.

WHAT IT IS: A space opera is a science-fiction story where the major emphasis is on melodramatic adventure. It usually takes place in outer space and on a very large-scale canvas.

RECENT EXAMPLE: Crossways by Jacey Bedford is set in a future where mega-corporations race each other to claim valuable resources across the galaxy and use indentured telepathy-enabled agents to do it. But telepaths Cara Carlinni and Ben Benjamin have defied their corporate overlords and are now on the run. While hiding out on the crimelord-run Crossways Station, they vow to find a missing space ark, and more importantly, the 30,000 settlers that are aboard.

WHAT IT IS: Time travel stories involve...wait for it...travel through time.

RECENT EXAMPLE: Rewinder by Brett Battles. Hired by the mysterious U

pjohn Institute, Denny Younger researches significant moments in human history by traveling through time and seeing them with his own eyes. It isn't long before Denny's seemingly harmless mission of "observe and report" is seen to have an ulterior purpose.

WHAT IT IS: A contemporary fantasy story set in an alternate version of our modern world inhabited by both humans and supernatural beings such as Vampires, Werewolves, Shapeshifters, and/or humanlike Elves or Fairies.

RECENT EXAMPLE: Killing Pretty by Richard Kadrey—the latest in his take-no-prisoners Sandman Slim series—in which Death himself is a character. Here, Sandman Slim investigates Death's death in the steamy underworld of Los Angeles, where he visits vampire-infested nightclubs and talent agencies that specialize in mad ghosts. But can even Sandman Slim defeat someone who is powerful enough to nearly kill Death himself?

WHAT IT IS: Vampires are supernatural creatures that feed off the blood of humans and (usually) can shape-shift into bats.

RECENT EXAMPLES: Dark Ascension by M.L. Brennan continues the popular Generation V novels. Here, slacker vampire Fortitude Scott warms to the idea of not being the black sheep in his family. That is, until his mother, the ruler of his powerful vampire clan, turns ill and the battle for succession begins. See also: The Fifth House of the Heart by Ben Tripp, in which a successful, globetrotting antiques dealer and his ragtag team of "Van Helsings" kill vampires for their loot.