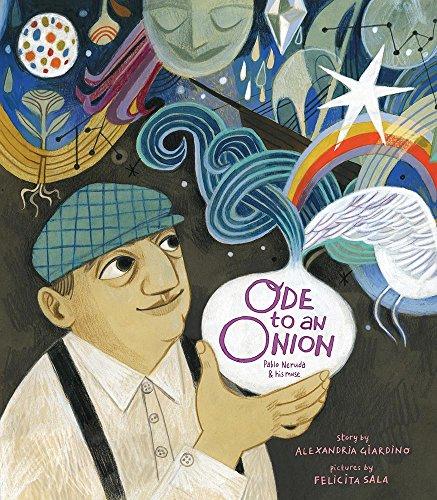 Many of you likely sat around a table yesterday, giving thanks. In his lifetime, legendary poet Pablo Neruda published more than one collection of poems that are odes to ordinary things and simple objects—meditations on gratitude, if you will. It was a particular talent of his—to make an ordinary thing seem extraordinary, leaving readers feeling indebted to something they may otherwise regularly overlook. One of those poems is called “Ode to the Onion”—originally published in 1954 in Odas elementales (or, Odes to Common Things)—and it’s the subject of a delicious new picture book by nearly the same name. Ode to an Onion: Pablo Neruda and his Muse was written by Alexandria Giardino and illustrated by Felicita Sala.

This is a wide picture book with full-bleed spreads, as if the book can hardly contain the abundance inside. The opening spread shows Pablo, his back to us and hard at work, writing a “long, sad poem” at his desk. Illustrator Felicita Sala, who was recently awarded a New York Times Best Illustrated Children’s Book for She Made a Monster: How Mary Shelley Created Frankenstein (written by Lynn Fulton), establishes here a primarily earth-toned palette with touches of rich blues, reds, and greens. Neruda lives by the sea. The window is open, letting in the light.

Pablo heads out to have lunch with his friend, Matilde. He is (and looks) gloomy. But Matilde? She likes to laugh, and Sala paints her with vivid red hair, a wide smile (“as wide as a guitar”), and a warm glow. There is no time for sadness, she tells him when he arrives. While Matilde laughs often, Pablo sighs. She was, as you see in this eloquent story, a force of nature and, despite what the sub-title says, much more than a muse. Thoreau once wrote that “to affect the quality of the day … is the highest of the arts.” This is what she did for Neruda. (“I am like scorched rock / that suddenly sings when you are near,” he wrote about her years later in a love sonnet.)

As they walk to Matilde’s gardens (featuring roses, garlic, peaches, tomatoes, and onions)—where the air smells “tangy and sweet”—Sala brings us an aerial view of the wooded area next to Matilde’s home. This spread is teeming with color—as well as more of Giardino’s descriptive language (as they walk by where the fennel grows, we read that the air smelled like “licorice and mud”)—and Sala features visually appealing lines with angular grasses, long and winding tree trunks, and rounded trees. There are playful perspectives throughout; one moment, we see the pair from above, and the next moment we are on the ground, seeing Matilde’s and Pablo’s feet amongst winding tomato plants. Matilde likens their sprawling, tangled vines to a tango.

When Matilde pulls an onion from the ground, she thanks it and then tells it she needs it in her kitchen. Pablo shrugs, as he knows the onion will “only make you cry when you slice it up.” When Matilde tells him that all he sees is sadness, he notes that he’s been crafting a poem about poor miners. Well. Yes. That is enough to weigh down a soul. Pablo’s heavy heart was a sensitive, fully-feeling one.

It is in Matilde’s kitchen that Pablo has a (happy) epiphany about the onion he cuts, the one that resulted in his “Ode to the Onion”—delightfully, it is printed in its entirety in both English (translated by the author) and Spanish in the back of the book. “This onion came out of the dark earth,” he tells his friend, “to shine like a bright moon,” adding his thanks to her for reminding him that in this world happiness, even in simple things, can exist alongside sadness. Matilde suggests he write about that. (But first they eat—in one of the few spreads where Pablo smiles.)

A short closing author’s note explains that Pablo and Matilde fell in love and moved in together during their lifetimes. (Not covered in the book was that she was his third wife with whom he initially had an affair.) This page includes a photo of the pair. Yin and yang. Light-hearted and heavy-hearted. I love that both of them wanted to make the world a better place.

Even better than the inclusion of the poem at the close of the book is the fact that the story is bookended by two very thin and lightweight onionskin pages. Perfect.

Aren’t onions beautiful? Matilde asks Pablo at one point. They are. And so is the gift she gives her friend—a reminder of the importance of a sustained connection to gratitude, even when your heart is heavy.