These are the SF/F/H Novels, Short Stories, and Sequels to Look for in July 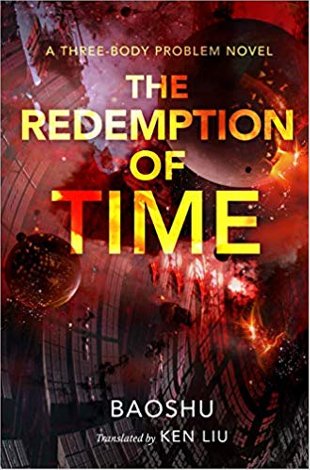 It's hard to beat science fiction, fantasy, and horror books for the kind of excitement readers crave in their summer reading consumption. Here are the best SF/F/H books you should be looking for...

The Redemption of Time by Baoshu (translated by Ken Liu)

If you enjoyed Cixin Liu's Three-Body Problem trilogy, then this follow-up novel by fellow Chinese author Baoshu should be on your radar. This original story looks at the aftermath of the devastating interstellar war between humanity and the extraterrestrial Trisolarans, seen through the eyes of Yun Tianming, a prisoner of war who sold out humanity in order to save it.

Beneath the Twisted Trees by Bradley P. Beaulieu

The imaginative and popular Song of Shattered Sands series revolves around the land of Sharakhai, a great desert metropolis surrounded (and cruelly ruled) by a dozen kingdoms. Beneath the Twisted Trees continues the story of Çeda, a brave warrior rebel. Çeda was trained as one the king's elite Blade Maidens, but now acts as leader of a band of skilled desert swordswomen known as the Shieldwives. She aims to undo the curse that enslaves the asirim to the kings.

Rotherweird is a town founded over four hundred years ago when the Tudor Queen banished a group of unnaturally gifted children to a remote part of England and sealed them off from the outside world. Their independence comes with the stipulation that its history remain secret...a delicate situation that becomes jeopardized when an outsider arrives. Caldecott's refreshingly unorthodox fantasy, the first in a trilogy, is being billed as a mix of "Gormenghast and Hogwarts".

Despite being stereotyped as futuristic fiction, science fiction has always possessed the ability to ability to ask tough questions about the society of today. Case in point: Dalcher's audacious debut, Vox, set in a near-future United States where women—children, teenagers, and adults alike—are limited to speaking just 100 words a day. Go over that quota, and the wristband that counts their spoken words delivers an electric shock of increasing intensity for each infraction. And, as Dr. Jean McClellan finds out when she receives a temporary reprieve from the word quota to help the president's brother, that's just the start.

What else can you say about a novel that combines time travel and espionage and is told through a series of letters between secret agents of warring factions from the future who meet in the past and fall in love? Oh! How about this: It's been optioned for television with the authors serving as co-writers and co-executive producers. The ride starts now. Don't miss it.

If near-future thrillers are your jam, check out the latest Cas Russell novel which puts the math-genius/mercenary at the center of lots of action. Thanks to Cass herself, the organization of telepaths that kept the world's Bad Guys at bay is gone, leaving her to deal with the increase in violent crime in the cities around the world. That puts her directly in the sights of west coast crime lords.

Aftershocks is a military sci-fi novel (the first of a new series called The Palladium Wars) that looks at the impact of war and how easy it is for conflict to be reignited. The aggressors of the war in question, the planet Gretia, went to war over the precious resource known as palladium—a war they lost against the other five planets in the system—and they are now occupied by Alliance forces. Former Gretian military intelligence officer Aden Robertson, a newly released prisoner of war, must deal with the realization that fought for the wrong side. Three other point-of-view characters flesh out this exciting new universe, including Adina, a sergeant with the occupation forces who finds herself at the center of insurgency; Dunstan, a naval officer who witnesses an attack on a supposedly defunct space fleet; and Solveig, a young woman poised to inherit her father's empire.

Gods of Jade and Shadow by Silvia Moreno-Garcia

When Casiopea Tun unwittingly frees the spirit of the Mayan god of death, she is forced to help him recover his throne from his treacherous brother. What follows is a cross-country odyssey that eventually leads to the Mayan underworld. Inspired by Mexican folklore, this creative journey is a story not to be missed.

What do you do when thousands of gods have fallen to earth and ushered in an era of chaos? If you're David Mogo, demigod and godhunter in the Nigerian city of Lagos, you follow orders. The wizard gangster Lukmon Ajala orders David to capture and deliver to him two of the most powerful gods in the city. Billed as "Nigerian God-Punk," Okungbowa's story is as refreshing as it is fun.

The Toll by Cherie Priest

I really enjoyed the atmospheric style of Priest's Eden Moore series and was thrilled to hear she's written a completely new Southern Gothic novel with The Toll. Here, newlyweds Titus and Melanie Bell travel across an old bridge across the Okefenokee Swamp to start their honeymoon. Next thing Titus remembers is waking up in the middle of the road to find the bridge is gone and Melanie is missing. Titus goes looking for his wife and finds that the local town has a dark, dangerous secret.

The Big Book of Classic Fantasy by Ann & Jeff VanderMeer

The VanderMeers have compiled an eminently readable collection of stories from authors around the world, seeking to introduce fantasy lovers to many rarely seen and underappreciated gems while still including a handful of more well-known authors to balance the mix. Collecting 90 (!) classic fantasy stories spanning 140 years in 840+ pages, this quintessential anthology is destined to become the standard by which future fantasy classic anthologies are measured. Watch this space for an upcoming interview with the editors and a peek at what went into creating this must-have anthology.

In this fast-paced thriller, a deadly virus is unleashed (once again) on an abandoned spaceship. The ship, a massive exploration vessel left behind by the government ten years ago after a deadly virus was discovered, was to become the salvation of Zahra's people, a separatist cult exiled from Earth. All she had to do was kidnap the sole survivor of the tragedy to gain entry. What she finds there may mean the end of humanity.

As survival stories go, The Wanderers definitely leans towards the unconventional. People across America inexplicably begin exhibiting sleepwalking-like symptoms, being driven towards the same location. The phenomenon scares those who are unaffected, causing a rise in terror and violence across the country. The only hope of preventing the collapse of society means getting to the bottom of the sleepwalking epidemic. If you think it sounds epic, you're right; Wendig's opus is being compared to The Stand by Stephen King.

The Rage of Dragons by Evan Winter

In this fantasy debut, the Omehi are a people fighting an unwinnable fight for almost two hundred years. Some of them are gifted: about one percent of the men can magically transform into killing machines and for every twenty gifted men, there is a woman who can call down dragons. Young, gift-less Tau loses the chance to make his mark on the world, but tragedy and revenge drive him to become the world's greatest swordsman.

The Tribe by Bari Wood

Wood's 1981 novel, the latest in the Paperbacks from Hell series of horror reprints, returns to find modern audiences to scare. It follows a pair of detectives as they try to find the link between the murder of a rabbi's son, the hideous death of the perpetrators of that murder, and a Nazi concentration camp whose prisoners were inexplicably healthier than their captors when the camp was liberated in 1945.

When faced with short spans of extra time, do what I do: read more short fiction! In addition to The Big Book of Classic Fantasylisted above, this month's short fiction lineup is mighty! Any of the following short fiction titles will expose you to the wonder of science fiction, fantasy, and horror...

A large part of science fiction, fantasy and horror is made of sequels. Besides those noted above, here is the lineup of sf/f/h sequels due out in July...