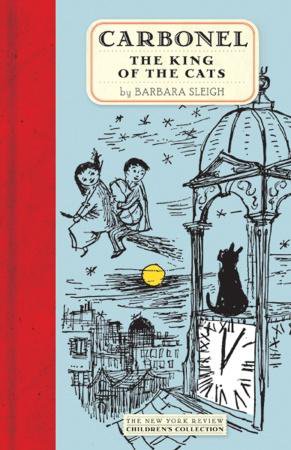 I feel silly even saying this, because if you are a children’s literature fan you likely already know this, but just in case: Do not forget to occasionally (or more than that) check out what The New York Review Children’s Collection publishes. “Time-honored classics for children of all ages” is how they promote what they do, and what it means is that…well, you know those books you read when you were a kid that are no longer in print? Even the really obscure one that no one else remembers and you can’t find online? It’s altogether possible that NYRB has reissued it. I always like to keep my eye on what they are doing.

Case in point: Just this month, they reissue

d Mary Chase’s children’s novel Loretta Mason Potts, originally published in 1958 and illustrated by Harold Berson. If you’ve never read it, the best way to describe it (which may or may not be helpful) is that it’s not unlike Alice’s Adventures in Wonderland meets The Lion, the Witch and the Wardrobe in a bar—and they buy Coraline a drink.

“Colin Mason was ten years old before he learned that he had an older sister.” Ah. Intriguing first line, yes? And then, even better, he finds out that she is an “awful, awful, bad, bad girl.”

Colin is the oldest in his family—or so he thought. He has a younger brother and two younger sisters. His mother is divorced, which was certainly a rare thing to see in children’s novels of the 1950s. “[Colin’s] dad had left home during the war” is all we get on that matter. This is followed by one of Colin’s friends asking him which war, “the World War or the Korean War?” Colin responds: “The war between Mom and Dad.”

For reasons Colin doesn’t understand at first, his newfound sister, Loretta Mason Potts, lives with an elderly couple on a “rickety old dairy farm.” As it turns out, Loretta and Colin’s mother had visited the farm when Loretta was only 5 years old, and Loretta had insisted on moving in. After Ms. Mason finally brings Loretta home (and how scandalized are the Potts children by Loretta’s rude behavior and sassy mouth!), Colin sees her, as depicted on the cover of this reissue, sneaking down a hidden tunnel that leads from a bedroom closet in the Mason’s home.

Colin follows her and discovers that it leads to a grand castle. A seemingly kind but haughty countess, her doting general always by her side, lives there. When crossing the bridge to arrive at the castle’s front door, one feels “the strangest sensation, a melting, dizzy feeling like a merry-go-round, or like the sudden drop of an elevator in a tall building.” Eventually, it is revealed, the bridge shrinks the person crossing it, for the castle, the countess, and her general are all just a few inches tall.

And why did Loretta stay and live with the Potts couple on their farm as long as she did? Why, she had discovered her own entryway to this strange and tiny castle, a mysterious hill on the farm’s grounds.

I can’t give away the ending, should you want to read this yourself, but eventually the entire Mason family ends up at this wee castle—and the countess is revealed as the meanie she actually is. It’s an entertaining read. And what modern American child, many under the wing of helicopter parenting, won’t delight in Loretta’s deliciously bad behavior

One of my favorite children’s lit blogs is Peter D. Sieruta’s Collecting Children’s Books. Peter shared lively anecdotes behind the publication of many beloved children’s books. Sadly, Peter passed away two years ago. I checked his site, and sure enough, he wrote here about Loretta Mason Potts. It’s a fascinating read. He notes that the book’s author, Mary Chase, was known as a playwright. (She wrote Harvey, which won the Pulitzer Prize for Drama in 1945 and was later adapted to the film starring James Stewart.) You can read in her bio in the Loretta reissue, to be sure, that she was a playwright. But Peter went on to note in his post that she actually wrote Loretta Mason Potts in 1953 and “over the next fifteen years, Mary Chase tried adapting this story for the stage with varying degrees of success.” It was finally staged (with both live actors and puppets) in 1968 under the title Mickey and, Peter noted, it’s still in print today.

This year, the NYRB has also reissued The Glassblower’s Children, written by Swedish author Maria Gripe (1974 winner of the Hans Christian Andersen Award for Writing) and illustrated by her husband, artist Harald Gripe. Their catalog also includes titles from Rumer Godden, Ruth Krauss, Palmer Brown, and Russell and Lillian Hoban. Have fond memories of Barbara Sleigh’s series about Carbonel, King of the Cats, or Esther Averill’s Jenny Linsky books? They’ve got those as well.

They’re blasts from the past—and especially fun on those days when you’re craving something old for something new.