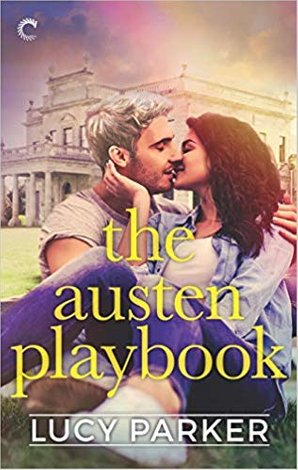 May is here, and boy didn’t those last four months go fast?!

I wanted to share a couple books I’ve listened to lately that I must recommend (highly), from some favorite authors!

First off is THE AUSTEN PLAYBOOK, the 4th in Lucy Parker’s London Celebrities series.

I love, love, love this author. Her characters snipe and snap at each other all while they’re falling in love. I usually have a hard time picking a favorite title from favorite authors, but honestly, I think this might be it for me where Parker is concerned (at least until we see where her next one takes us).

There is so much to love in all of her books, but I love this one in particular because a) we see both Freddy (female lead) and Griff (male lead) falling for each other despite their own fully-fledged determinations not to; b) it is set against the preparation for a complicated live telecast of an original Agatha Christie-ish mystery written around Jane Austen’s iconic characters; and, in the midst of it, Freddy and Griff discover a secret that blows the roof off a literary connection which has complicated their families’ connections for decades. I also love how Griff mainly fights his attraction to Freddy because he sees her as this kind of shining beacon of light, joy and optimism, and his own upbringing and experiences have formed this hard, protective shell, and he is both attracted to her and utterly terrified by that attraction. It’s fun, brilliant and lovely, and cements my love for all things Lucy Parker!

THE AUSTEN PLAYBOOK—In which experienced West End actress Freddy Carlton takes on an Austen-inspired play, a scandal at a country estate, an enthusiastic search for a passion outside of acting…and the (some people might say icy*) heart of London’s most feared theater critic.

*if those people were being nice.

If you like romance at all (and maybe even if you don’t), I can almost guarantee you’ll love this.

Next up is Sonali Dev and PRIDE, PREJUDICE AND OTHER FLAVORS, whichhits the shelves next week and is her first overtly women’s fiction novel, published by William Morris.

If you follow this blog at all, you’ll know I love Sonali Dev (and full disclosure, we have become friends since her first book released). Friends or not, though, if I don’t like a book, I simply won’t talk about it.

So let me tell you, I loved it. The tone and voice were slightly different. Her usual lush lyricism is missing (and I missed it!) but it makes sense for the characters and story. The lead female character, Trisha Raje, is a very no-nonsense Indian American neurosurgeon, and her love/hate love interest is DJ Caine, a celebrated chef who has moved from Paris to San Francisco to help his artist sister as she deals with a life-threatening brain tumor that will likely take her sight at minimum. The Caines are originally from England, where they were born to a Rwandan mother and Anglo-Indian father whose family took their home and threw them out when he died young. The Rajes are descendants of Indian royalty and very prominent in California, where Trisha’s brother is running for governor.

The story is stylized in certain ways after Pride & Prejudice. DJ and Trisha get very skewed impressions of each other in poor snapshot takes, then hold on to them even when external events start to hint that they aren’t who they seemed to be in those worst-possible-scenario moments.

This may be Dev’s most ambitious storyline to date, with a few more subplots going on than in her other books so far. However, they all tied together seamlessly and arced into resolutions that were very modern, even as they definitely echoed themes in Austen’s timeless masterpiece. I liked how Trisha’s family represented the Bennetts in number, but the Darcys in economic status, and how, rather than having a disapproving Lady Catherine de Bourgh moment, DJ had a kind of approving, I’m-checking-you-out visit from one of Trisha’s family members. I loved it, and I think you will too. Great characters, an engaging storyline, lots of tension and even a terrific Wickham-ish villain who nearly ruins everything, but discovers Trisha isn’t the meek shrinking violet she once was.

So there you go—two awesome reads you should pick up.

What recent reads have you discovered that you can’t help raving about?