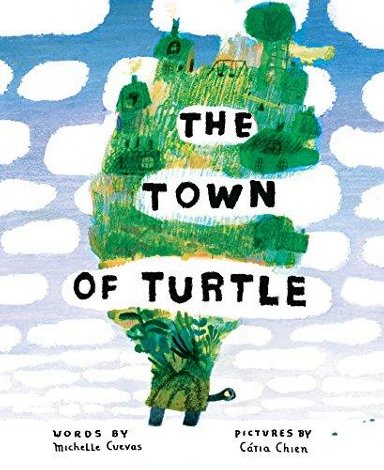 No one is ever going to have a hard time finding a picture book about a lonely and/or shy protagonist reaching out to make a friend. We have enough of those to cover a small planet—much like the one that the title character in Michelle Cuevas’s and Cátia Chien’s The Town of Turtle lives on. Or maybe it’s a rock in space that he calls his home. Whatever it may be, his only friend is his shadow, whom he speaks to and has actually named Shadow. Unfortunately, Shadow never replies.

Even though this is a theme well-explored, this is a story that stands out for its sheer oddity. (To be clear, it’s never odd for the sake of being odd, which can tire readers.) It’s a genuinely quirky and delightful text, made all the more intriguing by the way in which Chien runs with the words and envisions Turtle’s world. I’m no illustrator, but I would bet most artists would find this a dreamy text to illustrate, as Cuevas leaves ample room for the illustrator to extend the text in imaginative ways.

Turtle dreams of a home better than his shell. In the vivid Chagall-esque spread where we first read this, we see what Turtle sees in his mind’s eye. Maybe Turtle is a wannabe-modernist painter, because this spread is an electric explosion of color and line. After deciding to make renovations to his shell, he gets to work building and painting. He builds a new home; plants a garden; builds neighboring homes, a library, a school, an ice-skating rink, an aquarium, and a Ferris wheel. Oh, and a wax museum. (How I love this detail.)

Please understand that for all of this—and Chien could have taken this in any number of directions—we see that Turtle has slipped from his shell (that’s what he’s renovating, after all) and is running about, working hard, without that covering. He looks like a small alien of sorts. That he leaves his shell to do this work manages to be both somewhat creepy and perfectly sensible at the same time. How I love this, too.

As he takes a break to nap, his dream, of all the things, ventures out into the world; I like this notion and only wish all of our dreams would follow suit (except the nightmares). This particular dream is one of having friends who live in the town he has built. Since the dream took flight of its own accord and revealed itself to others, all kinds of other creatures see this new town Turtle has built. They are curious and decide to move in. “A painter, a sailor, and a ballerina came first,” Cuevas writes, adding: “The wind moved into the trees, laughter moved into the houses, and light moved into the dark.” This wasn’t the first time in the book I was struck by how Cuevas can turn a phrase. (We read earlier, for one, that when Turtle sleeps, he sleeps “the sleep of a broken pocket watch,” which is how his dream got away from him without his knowledge.) We are even treated to a gatefold spread, depicting his new and improved shell after everyone arrives. It’s a bustling, gloriously bizarre, colorful community, because sometimes “the world you dream can come alive around you.”

This new Town of Turtle makes Turtle’s shadow even bigger, and Turtle even calls out a good-night to “his town.” Is Turtle effectively the town’s god? Is Turtle’s shadow tantamount to a new and improved sense of self, now that he has friends and a community? These are questions that may pass through the minds of young readers who enjoy their visit to the Town of Turtle as much as I did.

Perhaps, after some time passes, Turtle will develop the kind of deep and abiding friendship that Jerome has in a new French import on shelves, Thomas Scotto’s and Olivier Tallec’s Jerome By Heart. This was originally published in French nearly a decade ago, but Enchanted Lion has brought it to American shelves this year, translated by Claudia Zoe Bedrick and Karin Snelson.

The story is told from the point of view of Raphael, a boy declaring his love for his friend, Jerome. “He always holds my hand,” the book opens. “It’s true. Really tight.” Tallec depicts them here on a set of bikes, holding hands and smiling as they pedal, oblivious to the long line of cars behind them—and the displeased drivers therein. We see them as they go through their days, truly delighting in one another’s company.

Though children this young and of the same sex are capable of intense, all-consuming friendships (certainly one way to read this book), Raphael speaks in the language of the deeply smitten, and we get the sense that perhaps we are reading a coming-out at a very young age: “[B]y dinner, I’ve stocked up on enough of Jerome to last me the whole night. That’s important.” Note also the “it’s true” in the book’s opening, mentioned above. It’s as if Raphael is acknowledging readers’ disbelief over their hand-holding just as they arrive at it—because, no matter what country you’re in, most boys are actively discouraged from such outward shows of affection.

Raphael’s parents, especially his father, seem disturbed by their son’s declaration of love and the boys’ bond, which frustrates Raphael so much he sends himself to his room to calm himself down. He paces the floor—“[a]round and around my table. Around and around my questions.” In the end, he decides to dismiss his parents’ anxieties over his love for his friend and declares his adoration once again: “I can say it. It’s easy.”

In recent years here in the States, we’ve seen a small number of picture books with queer themes, but more often than not, it’s a picture book about parents who are gay. This sensitive and affirming story, like a beating heart laid bare, actually addresses the intense, devoted feelings of a child protagonist—and with such simplicity and eloquence. (At one point, Raphael marvels at how his mother doesn’t notice how he possesses a “secret hideout” in Jerome’s warm smile.) Illustrator Tallec puts his palette to work to intensify the book’s emotional arc—from warm, effusive reds of the book’s beginning to darker hues when Raphael’s parents dismiss his feelings.

Turtle (and Shadow) and his new community of friends. Raphael and Jerome. Two stories of devotion running deep. Two stories that will stay with you.