The Unauthorized Lord of the Rings 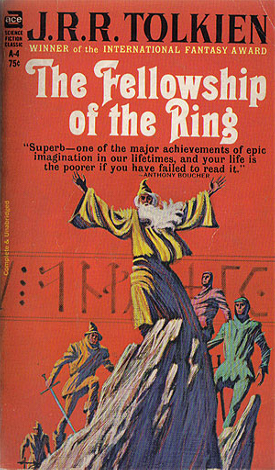 A brief announcement: I’m happy to say that I’ve signed on with Jurassic London to publish a volume on science-fiction history, based in part on the column I’ve been writing here! More details will come in the future, but my hope is that this book will be published in early 2015.

Following the success of his first novel, The Hobbit, or There and Back Again, J.R.R. Tolkien began to embark on a sequel adventure, only to find that he was penning a tale that would grow in scale and in scope, eventually producing The Lord of The Rings, a massive story that was broken into three individual volumes: The Fellowship of the Ring, The Two Towers, and The Return of the King. The three books were published successively in 1954 and in 1955 in England by George Allen & Unwin and imported to the United States by Houghton Mifflin. While successful in the U.K., no U.S. publisher acquired the rights to print the book until 1965, a full decade after their first appearance in print. The editions produced by Donald Wollheim’s Ace Books would prove to be both popular and highly controversial.

On September 21st, 1937, Tolkien published The Hobbit to immediate critical and commercial success. The book sold out, and was reprinted quickly. Just a month later, Tolkien and his publishers set about looking into a sequel. Another body of work, The Silmarillion, was suggested but rejected, as the publishers wanted something more in the same tone as their best-seller. Tolkien turned to the page again, realizing that his starting point would be the ring recovered from Gollum's cave. The story grew immensely, and by the 1950s, it was ready for publication.

Across the Atlantic, Donald Wollheim had found a great success when he founded Ace books along with Aaron Wyn in 1952, a publisher dedicated to paperback novels. In 1953, they began a science fiction line of Tête-bêche-style double novels, which plastered one short novel with another at a fairly low price. It was a venture that would introduce a number of new authors to the science-fiction community. By 1964, the success and popularity of the Lord of the Rings trilogy in the U.K. was readily apparent, and Wollheim called Tolkien to look into purchasing the rights for Ace. The series had been imported to the U.S. by Houghton Mifflin, who was granted a limited, five-year license to import the trilogy in limited numbers to America. According to Betsy Wollheim in a recent interview, Tolkien was not interested in seeing his books in paperback form: "When he called up Professor Tolkien in 1964 and asked if he could publish Lord of the Rings as Ace paperbacks, Tolkien said he would never allow his great works to appear in so ‘degenerate a form’ as the paperback book."

Offended by Tolkien's slight on the medium from which he made his living, Wollheim didn't give up. In an essay in Leigh Grossman's Sense of Wonder: A Century of Science Fiction about her father, Betsy Wollheim noted that her father was stubborn, and did as he believed was right. With some research, he found a what he thought was a loophole in copyright law: The limited copyright under which Houghton Mifflin had been publishing the books had expired and wasn’t renewed, and he believed that the copyright for The Lord of the Rings had been abandoned, and that it was in the public domain. With this reasoning, he could publish the novels without coming to an agreement with the Oxford professor and bring the books to the "degenerate form" which he was most familiar. At this point

in time, the U.S. had yet to join the International Copyright Convention, and most laws on the books existed to protect domestic creations from foreign ones. As the trilogy became incredibly popular, Houghton Mifflin was technically in violation of the law when they exceeded their import limits, and failed to renew their interim copyright. Wollheim and Ace set about printing their own edition of the trilogy, with a new typeset and with the appendices photographically reprinted. The new editions also featured bright covers from Ace cover artist Jack Gaughan.

Tolkien and Houghton Mifflin were aware of the potential copyright problems that loomed, and by early 1965, they were taking steps to publish a new version which they could copyright in the U.S. In April of 1965, they received word that Ace was about to publish their own version of the trilogy, one that would be priced competitively. At this point, Tolkien had already moved on to other projects, and was reluctant to return to editing The Lord of the Rings, given its length and complexity. In the meantime, Ace released their version of The Fellowship of the Ring in May, with The Two Towers and Return of the King following July of 1965. In August, Tolkien delivered his new revisions to Ballantine Books, the publisher which would release the official American editions. Interestingly, Humphrey Carter, in Tolkien’s official biography, noted that while Tolkien was displeased with the Ace editions, they at least sported covers that resembled their stories; by contrast, Tolkien was distressed at the cover art for the Ballantine editions, to which he noted: “What has it got to do with the story? Where is this place? Why emus? And what is the thing in the foreground with pink bulbs?”

Ace’s editions were a commercial success, selling over 100,000 copies, which angered Tolkien and his publishers. They complained, and as early as May 1965, Tolkien began to urge the fans who wrote to him to inform them that the American copies were pirated: "I am now inserting in every note of acknowledgement to readers in the U.S.A. a brief note informing them that Ace Books is a pirate, and asking them to inform others."

Over the remainder of 1965, the pressure mounted on Ace Books to cease publication of their edition. In October, Tolkien noted in a letter to his son that "campaign in U.S.A. has gone well. 'Ace Books' are in quite a spot, and many institutions have banned all their products. They are selling their pirate edition quite well, but it is being discovered to be very badly and erroneously printed; and I am getting such an advt. from the rumpus that I expect my 'authorized' paper-back will in fact sell more copies than it would, if there had been no trouble or competition." Competition to the Ace copies arrived at the same time, as Ballantine Books released their own ‘authorized’ The Fellowship of the Ring and The Two Towers in October and Return of the King in November of 1966. While Ace’s editions were priced at $0.75 against Ballantine’s $0.95, the tide began to turn as the negative publicity mounted.

It’s interesting to see that Tolkien utilized the fanbase that he so abhorred to fight back against the unauthorized editions. He was also correct: The incredible publicity that the row received, which pulled in efforts from the Science Fiction Writers of America, helped to grow the fervent readership for the tales from Middle Earth. It’s also ironic that while Tolkien had resisted so “ ‘degenerate a form’ as the paperback book,” it was in that format which they first appeared and grew in popularity within the United States.

Bookstores and fans began to boycott the unauthorized edition, and by February 1966, Tolkien reported in a letter that he had reached an agreement with Wollheim to receive some royalties from their publication run, and a promise that they would let the edition sell out, with no further print runs. Ace was under no legal obligation to agree to such a deal, but considerable pressure from their rival publishers and readers forced them to the table. By March, Ace announced that they had reached an agreement with the author, and their edition fell out of print. New editio

ns from Ballantine sported the words “The Authorized Edition” across their covers, while the back of the books featured a pointed statement from Tolkien: “This paperback edition, and no other, has been published with my consent and co-operation. Those who approve of courtesy (at least) to living authors will purchase it and no other.” Newer editions feature a “Note on the Text” section, which indicate copyright issues, and note the improvements made upon the later versions.

The popularity of The Lord of the Rings followed the books across the Atlantic, sparking a new movement of fantasy fiction. Betsy Wollheim noted that her father’s actions had a lasting impact in the genre: While his methods were highly unethical, they nonetheless helped to bring one of the most important works of fantasy to American readers and raised the profile of the trilogy even higher, something which Ballantine Books was able and willing to take full advantage of. As epic fantasy grew in popularity, Ballantine was able to further capitalize on publishing trends, as they launched the Ballantine Adult Fantasy Series, edited by Lin Carter.

Wollheim’s publishing decision impacted his enormous reputation within genre circles: One of the most influential figures in the publishing industry at the time, he was only nominated for the Editor Hugo twice, in 1973 and 1974, but failed to earn either, although he would later be honored in 1981 and 1986 with Special Professional Awards from the World Fantasy Convention.

The entire affair seems to have had lasting ramifications for Tolkien’s estate as well, and has moved aggressively to protect their works. In 1993, a court found that the reasoning which the publishing house used to produce their own editions was flawed: where they reasoned that the lapse of a copyright renewal indicated that it was a de facto forfeiture of rights, the court disagreed. The opinion noted that provisions within a 1909 copyright law did protect the rights of the original copyright holder: While " 'forfeitures are never to be inferred from doubtful language.' Washingtonian Publishing Co. v. Pearson, 306 U.S. 30, 42, 59 S.Ct. 397, 403, 83 L.Ed. 470 (1938), this rule need not be relied upon: the 1909 Copyright Act makes no provision anywhere for forfeiture of copyrights of aliens because of distribution of their works without a copyright notice."

Why this was not the case and followed up on in the 1960s isn’t clear, but it does speak with the lengths to which Tolkien and his heirs went to hold onto their Middle Earth stories.

Today, epic fantasy fiction has become a mainstay within the publishing industry: Epics such as George R.R. Martin’s A Song of Ice and Fire series, and Robert Jordon’s Wheel of Time series certainly owe their existence to Tolkien’s epic trilogy, and in part to the intense popularity sparked by Wollheim’s own brash publication.