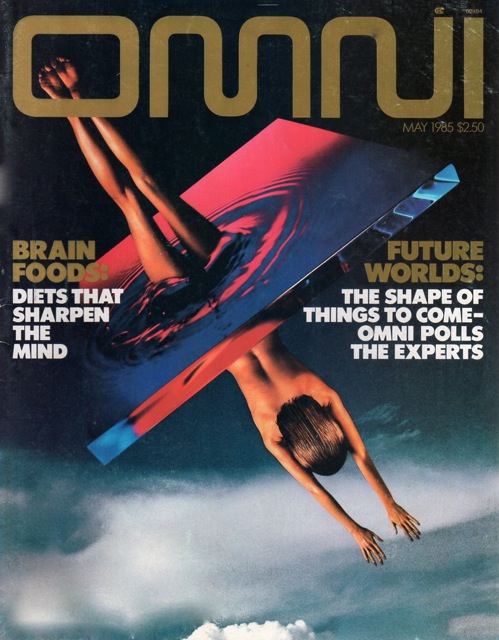 In the 1980s, science fiction experienced a shift. Traditional genre magazines that dominated the field began to fall away as readership fell, while paperback and hardcover novels began dominating readers' bookshelves. Film companies started realizing that science-fiction movies were incredibly popular, introducing an entirely new audience to stories only previously imagined in the pages of a book. While this was all happening, there was one magazine that remained both influential and successful: Omni Magazine.

In 1978, Bob Guccione, the publisher of Penthouse Magazine, announced a new magazine project titled Nova. This publication wouldn't be pornography, but one that focused on science, fiction, and everything in between. It would be well-funded, with a budget of $5 million, along with another $3 million for publicity. Guccione was prompted to begin the project in part by his wife, Kathy Keeton, who, according to Mike Ashley in Gateways to Forever: The Story of the Science-Fiction Magazines from 1970-1980, "retained a childhood passion for science fiction and escapist literature. It was she who wanted a magazine that explored all realms of science and the paranormal, that delved into all corners of the unknown and projected some of those discoveries into fiction."

Nova was planned for a September 1978 launch. Fiction would always be part of the mix, according to Dick Teresi, who planned out the project: "I included science fiction in the blend because I noted that all great magazines had fiction, and I also knew many scientists who grew up on science fiction." Guccione brought a team of people on board: Frank Kendig, who had edited Science Digest and the Saturday Review of Science, Ed Rosenfeld (who would edit the magazine's nonfiction content), Judith McQuown (who would edit the magazine's fiction), and Frank DeVino (Art Director). Kendig had originally approached Ben Bova, the editor of Analog Science Fiction and Fact, to work for the magazine. When McQuown left the magazine, Kendig tried to get Bova to come on board again, but the editor begged off, and recommended Diana King, the associate editor at Analog. King joined the team and began work on the new magazine.

Shortly before Nova was set to launch, Boston public television network WGBH filed an injunction against the magazine: they alleged that the title of the magazine would interfere with one of their flagship programs, Nova, the science documentary program. Guccione opted to change the name of the magazine, and chose Omni, because the name fit the existing format. Other problems arose: after working on the first issue, King got married. Kendig once again went to Bova. "At about the same time I had made the decision to quit Analog, so Frank invited me to lunch again. He pointed out that the there was a hole in the staff that was partially my responsibility. After thinking about it for a couple of minutes, I agreed to step in as the fiction editor, at least pro tem."

As this was happening, Bova was in need of a reader for the magazine's submissions. He was contacted by Ellen Datlow, who’d been working for a couple of years as an editorial assistant in the publishing industry. She was persistent, and he offered her the opportunity to read submissions for the magazine.

Just a month later, the newly renamed Omni launched on schedule in September 1978. The thick magazine boasted a triumphant editorial from Bob Guc

cione: "Time may have transformed my OMNI, but its properties remains the same....Its magic has become the alchemy of logic, the geometric progression of knowledge, science and technology....OMNI will continue to 'see' the future....a future of growing intellectual vitality, of expanding dreams and infinite hope."

The magazine featured a range of content: nonfiction articles on the Earth, Radio Telescopes, a feature on the Nobel Prize and an interview with Freeman Dyson. Also included were reviews of books such as The High Frontier by Gerard K. O'Neill and The Third Industrial Revolution by G. Harry Stein, along with previews of upcoming television shows such Battlestar Galactica and Battle of the Planets.

The September issue also featured new science fiction: “Valley of the Kilns,” by James B. Hall (his only sci-fi story); “Time Warp,” by Theodore Sturgeon; “Invisible Stripes,” by Ron Goulart; and “Found!,” by Isaac Asimov. Alongside the articles and fiction was fantastic artwork by the likes of H.R. Giger and others. The company published a million copies, and attracted over 100,000 subscribers, which steadily grew over the next year.

In Gateways to Forever, Ashley notes that what Guccione was doing wasn't too dissimilar from what Hugo Gernsback had done six decades earlier: "[Gernsback] encouraged readers to experiment and invent and to look to the future through ‘scientific fiction.’ It was the popularity of the fiction in Science and Invention that prompted Gernsback to launch Amazing Stories in 1926. Now, 60 years later, Bob Guccione was doing exactly the same thing—only better."

While Omni was off to a strong start, the magazine shuffled around its staff: Kendig resigned in 1979, and Bova was elevated to the executive editor's position. In his place, Bova hired Robert Sheckley to edit the magazine's fiction, and brought Datlow on board full time as the magazine's associate fiction editor. Sheckley lasted only a couple of years before resigning: he took the summer of 1981 off to resume his own writing, and then opted not to return. Datlow was elevated to fill his position, where she would remain for the rest of the magazine's existence. By 1982, Bova himself found that the pressure of running the magazine was too much and made the decision to resign.

Datlow noted that while she initially bought science fiction for the magazine, she eventually expanded her reach by including fantasy and horror into the mix. Her goal was to purchase stories that she enjoyed: "I wanted science fiction to be perceived as a literature for adults. I wanted it to be as literate as the best mainstream fiction." She also entered the position from outside of the genre scene, even as she had read within it all her life. "I came into the field from the outside (even though I read in that field all my life) and had no preconceived ideas of what I wanted to do. I didn't know science fiction magazines existed until I got to Omni." She loved her work and was largely permitted to run the fiction department as she wanted, although there were occasions when her bosses didn't allow her to pick up stories she felt would be a good fit due to an overabundance of inventory.

Coming in with a set of fresh eyes allowed Datlow to utilize a unique style for Omni: she wasn't held down or back by what other genre magazines had done in the past. While Omni was generally greeted with some trepidation from genre fans, Bova, Sheckley, and Datlow had something that soon won them over: Guccione's deep pockets. Omni had the ability to pay far more than any other genre magazine at the time, paying anywhere from "$800 and $1,250 per story, four times the level Bova had been able to pay at Analog," Ashley notes in Gateway to Forever. The high rate o

Genre fans soon responded to the quality of Omni's fiction selection: in 1980, George R.R. Martin picked up two Hugo awards for “The Way of Cross and Dragon,” which also earned the magazine a Locus Award, and “Sandkings,” which picked up the Nebula and Locus Awards. Many other awards would soon follow, cementing Omni's place in genre history as a landmark publication that introduced genre fiction not only to a wider audience, but also introduced that audience to new authors and concepts.

Omni began publishing at a time of great change in the genre and publishing communities, and the magazine's glossy cover and outstanding art direction helped to set it apart for readers. It was a high-quality publication, and Datlow did her part, focusing on publishing stories that were well-written and polished: "Although there were some writers who in the early years of the genre wrote ‘well,’ most of the work until the New Wave was pretty pulpy, the language clunky and serviceable, but that was it." Genre fiction was increasingly pushing into the mainstream consciousness, particularly as the film industry began to release science-fiction movies that better realized the content long reserved for fiction.

At the same time, science-fiction writers were branching out and trying new things. While major authors such as Arthur C. Clarke and Isaac Asimov landed incredible deals for continuations of long-running works that became instant bestsellers, a smaller knot of authors writing for Omni were experimenting and innovating, such as William Gibson, Bruce Sterling and Pat Cadigan. They experimented with topics like computers and nanotechnology in novel ways, helping to spark major new subgenres such as Cyberpunk.

In 1988, sales of the magazine peaked at a million subscribers and began to decline. The magazine's editors produced a set of anthologies, The Best of Omni Science Fiction, through the 1980s, which ultimately became its own publication, first edited by Bova, and later by Datlow. In 1992, the magazine relocated to North Carolina, and began to drop issues as the magazine industry contracted. In 1995, Omni announced that it would become an electronic-only magazine, Omni Online, with the printed edition ending in April of that year. The website continued to produce content through 1998, when the magazine closed up shop for good. In recent years, the publication has been revitalized, under the title Omni Reboot, and publishes a range of sci-fi-related content and fiction.

Ultimately, Omni can be remembe

red as an injection of fresh blood and thought into genre circles. The science-fiction community was changing in profound ways at the time: no longer was fandom limited to the people who read genre magazines, novels, and attended conventions. Omni's readers were a wide range of people with an equally diverse group of interests. For that reason, the magazine was profoundly influential on a generation of science-fiction readers and writers, who have since sprouted careers of their own. Ellen Datlow has since become one of the reigning figures in genre short fiction, producing hundreds of anthologies since the end of the magazine. According to Annalee Newitz and Charlie Jane Anders, influences to Omni run deep: their website io9, founded in 2009, is almost a spiritual successor to the glossy magazine. It fills a very similar niche, covering a blend of genre and real-world science news. According to the Encyclopedia of Science Fiction, "not only was [Omni] one of the most successful publishing ventures of its time, it revolutionized the general readership's perception and understanding of science and, thanks to its fiction editors, published some of the most memorable fiction of the period."

More than just a magazine, Omni was a representation of where the future of science-fiction was going: it became more diverse, visionary, and stranger than anyone could have ever guessed. The magazine influenced a generation of speculative fiction authors and readers, and will likely continue to do so: the entire run of the magazine has been digitized and can be found online for the world to read.