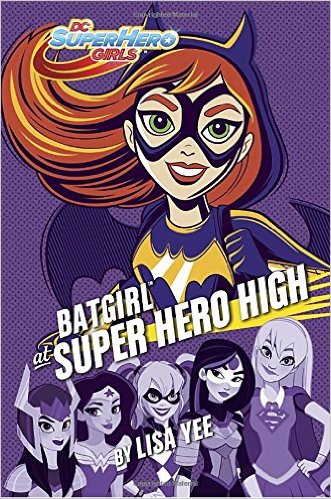 In 2016, a brand new series launched both in animated and book form: Super Hero High, starring high school-aged future DC superheroes (and supervillains). On Cartoon Network (televised and online), middle grade fans can watch some of the most famous and beloved superheroines embark on the first steps of their high school careers—which includes regular teenage missteps in addition to a healthy dose of crime-fighting peril. Simultaneously with the television series, a middle grade book series also launched, spotlighting a different super hero with each volume. To date, the series has spotlighted Wonder Woman, Supergirl, and most recently, Batgirl.

And today, I’m here to tell you why this book series is awesome, empowering, and the perfect entry point for a brand new generation of superhero fans.

Adolescent superheroes are not a new concept in the comic book world (or the animated world, for that matter)—these books can range from kid-friendly (Gotham Academy, Patsy Walker AKA Hellcat) to slightly more risqué. Prose adaptations of superhero stories are usually positioned for older audiences and to mixed effect (at least, this is true of the prose novels I’ve read starring Superman or Wonder Woman)—it’s tough to find a series that is aimed squarely at young readers and one that is welcoming enough to allow for new readers who might know nothing about the DC universe to dive in.

Enter DC Super Hero Girls’ Super Hero High series, written by Lisa Yee. Featuring some of the best-known characters from the DC Universe, the series follows not just superheroes like Wonder Woman and Batgirl, but future supervillains like Harley Quinn and Poison Ivy. (One of the coolest things about Super Hero High is that it’s an academy that empowers the future super-leaders of tomorrow—whether they use their abilities for good or evil is up to them.) For a new reader, who hasn’t really heard anything about Katana, Bumblebee, or Star Sapphire, or even for a more seasoned fan who wants to read an origin story for Supergirl (before she became a hero on a CW televisions how), Super Hero High is the perfect starting point.

Each of the stories deals with superhero characters, but contends with very human problems. Wonder Woman’s arc dealt with her earnestness and the fact that she grew up on an island without men or deception—she has a very hard time understanding her peers and how her potential friends misinterpret her eagerness and honesty as snarkiness. Supergirl has lost everyone she knows (well, except for one superhero cousin)—her entire planet, Krypton, having been destroyed—and grapples with her loss, awkwardness, and homesickness at Super Hero High. And Barbara Gordon, aka Batgirl, struggles with her father’s protectiveness and her own desire to fight crime and make him proud.

Each of these stories is relatable for readers of all ages—and what’s more important is that they are empowering in their own right. The main characters here aren’t Bruce Wayne or Superman or Green Lantern—there are male superheroes attending the high school, but they aren’t the lead characters or even the pivotal ones in any storyline. Rather, these books show how super hero female protagonists face challenges on their own and the different way each one of them chooses to approach and tackle their conflicts. Each girl is a super hero and the star of her own story—and in a movie, television, and even book world where women super heroes are relegated to placeholder 10 minute segments, who almost never get their own full-length features, Super Hero High is a much-needed breath of fresh air.

If you have a middle grader in your life looking for super-sized action, or a superhero enthusiast who isn’t sure where to turn to get more of the superheroes they might see on TV or in movies… Or if you just want to dive into a good book that shows young readers—especially young female readers—that girls can be the super heroes of their own stories, look no further:

Super Hero High is for you.