What To Read After 'The Cursed Child' 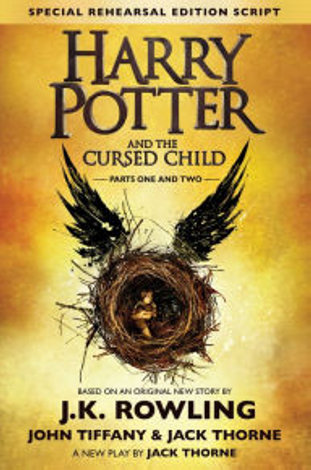 On July 31, a certain wizard celebrated his thirty-sixth birthday. Harry James Potter, the Boy Who Lived (and lived, and lived some more) may have concluded his adventures as a teenager in Harry Potter and the Deathly Hallows nearly eight years ago, but fans were granted a new story in the official canon with the book release of Harry Potter and the Cursed Child. A two-part West End play, captured in book form, The Cursed Child was welcomed into the muggle world at midnight this past weekend with release parties across the country.

Ana, my Book Smuggling cohort, and I are among the lucky few who have tickets to see the play in person (NEXT WEEK!)--and we also have just finished our Epic Harry Potter Re-Read in preparation for the newest adventure in the Harry Potter universe. But now, we face that age-old problem: what do we read next?

If you, too, are a Potter fan, and find yourself listless after The Cursed Child, this list is for you.

A Most Magical Girl by Karen Foxlee. In Victorian England, young Annabel Grey is ready for a most unexciting life as a proper young lady—however, a twist of fate finds her in the middle of a daring adventure involving magic, wizards, and witches. Together with new friend Kitty, Annabel must rescue a sacred wand from falling into the wrong hands.

Percy Jackson and the Olympians series by Rick Riordan. This is kind of a gimme, but the reason Rick Riordan is so well-loved is because his books are compulsively readable, very much in the same vein as J.K. Rowling’s Harry Potter. Percy Jackson is a young man who never knew his father and is perfectly happy to keep it that way—until he learns he is the son of Poseidon and a demi god. Not just any demi god, but one with a devastating prophecy attached to his birth which could change not only the fate of the gods, but all of the humans who are affected by their power.

The 13 Treasures series by Michelle Harris. Of all of the many, many “next Harry Potter” comps I’ve read over the years, 13 Treasures and the following books in the series come closest to the sense of magic and wonder I felt when discovering The Sorcerer’s Stone for the first time. A young girl named Tanya cannot rid herself of evil fairies, but no one else will believe her that they exist and that magic is real—so she is banished to a secluded, deep-dark-forest manor with her grandmother as punishment. You know how THAT goes, right?

The Left-Handed Fate by Kate Milford. Have you read Kate Milford yet? No? Please do so immediately. The Left-Handed Fate is the newest book from Milford, and follows Lucy Bluecrowne and Maxwell Ault, who are on a mission to find the scattered pieces of a mysterious machine that could stop a devastating war—or plunge the world into darkness. All of Milford’s stories are set in the same world--one where the magic of fables and folklore are real, and time is more fluid, and arcane engines can do great and terrible things. These books blend history with fantasy in perfect measure, and I cannot recommend Milford’s work enough. (You can jump in anywhere as the books aren’t sequential, but if you want to start at the very beginning, I recommend reading The Boneshaker first.)

The School for Good and Evil series by Soman Chainani. The School for Good and Evil takes one of the most subversive twists on friendship, “good”, “evil”, and “true love” that I have ever read. Every year, two children are spirited away from the village—one beautiful and good, one strange and evil. These children are placed, respectively, into schools for Good and Evil, where they learn to become the fairy tale hero or villain of their own tale. Except this year, best friends Sophie and Agatha end up in the wrong schools—the odd and homely Agatha ends up in the school for good, meanwhile the golden-haired and peach-complexioned Sophie ends up in the school for Evil. A mixup? Or the first step in a grand adventure to discover what it truly means to be good, and what it truly means to be evil? This trilogy is expansive, subversive, at times confusing, but always hugely entertaining and thought-provoking—and sure to delight any Harry Potter fan.

A Resurrection of Magic trilogy by Kathleen Duey. Imagine a world where magic exists, but has been banned—anyone known of possessing magic hides this fact for fear of ridicule or punishment. Now, imagine a world so many centuries later, where magic has been restored, but is only available to the most powerful wizards, who miserly guard their magic within their great stone academy. Only 10 students are allowed to graduate from the academy each year—only those who can survive the school’s terrible tests. Fans have been eagerly awaiting the third and final book in the trilogy for YEARS—the good news is that it is currently in production, so you can jump in the series now in time to catch up.

And that is it! Our list of recommended reading for more books along the same vein as Harry Potter. What titles have we missed, or are on your list?