When Perfect is Too Much 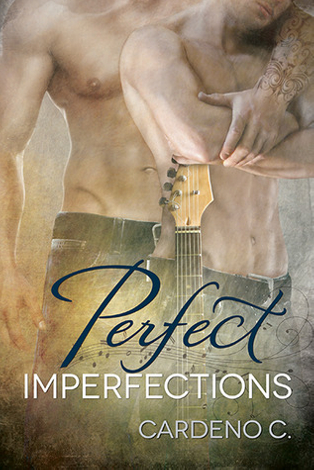 If I had to write a six word review of Perfect Imperfections by Cardeno C., it would be: "Nice, enjoyable, wish there was more." This is a book where, while I was reading it, I was content, though sometimes a little bored. Afterward, the more I thought about it, the less the story held up to examination. It was recommended by a reader who said it was a sweet, happy m/m romance, with not much angst, and I was totally on board for that.

It's not that it wasn't good. It was perfectly nice. But it was light on conflict. I kind of wanted light because mentally I'm exhausted after the Romantic Times convention. And just because it had light conflict doesn't mean that it wasn't good. But even with my desire for something lighter, this was very light—too light and too easy. What little conflict resided in the story was resolved in one scene.

Jeremy Jameson is a world-famous pop star, the son of two famous actors and the grandson of Hollywood royalty. He's been tangentially famous as long as he can remember, and when he started a recording career at 18, he became famous in his own right. His life has been touring and recording, then more touring and then more recording, and he's lived a somewhat superficial life as a performer. He's in a bar in the middle of nowhere, Arizona, when he meets a bartender and they begin chatting. Reg, the bartender, is a very mellow, friendly, happy dude (who regularly uses the word "dude," thus I found him really endearing) who is saving up money to go travel the world and have adventures. He's been working at the dive bar and living in a very small apartment to keep after his goal: quit everything and go roam. He's interested in Jeremy personally, not as a famous figure, but also senses right away that Jeremy is lonely and miserable.

Reg takes Jeremy back to his apartment after realizing Jeremy was in no shape to drive, and that starts Reg's role as a caretaker. They get more drunk at Reg's house, and Jeremy makes Reg an offer: come with him on his world tour and be his pretend boyfriend. Having the pretend boyfriend will (though I don't know how) keep reporters from being up his ass (no pun intended) about his life, and he won't be dealing with someone similar to his previous ex-girlfriends, who didn't like Jeremy for himself but rather for what his stardom could do for them. Jeremy explains to Reg that his life when touring isn't very fun and is often boring: waiting for Jeremy to get off stage, waiting for Jeremy to finish interviews, waiting for Jeremy to finish something else, then on to the next stop. People who are focused on elevating their own careers using Jeremy's fame get bored and frustrated in a hurry because the attention isn't on them.

Reg has no problems not being the center of attention. Reg is the most well-adjusted, happy and content person in the universe, ever. Reg becomes Jeremy's "fake boyfriend," and while the reasons were insisted upon at the beginning of the novel, I didn't quite understand why it was so important, and why Jeremy would repeatedly discount the idea that "playing gay" would be ineffective, or offensive to those who are anti-gay, or offensive to those who are gay, or all of the above. "This is what I want to do so shut up about it," is pretty much Jeremy's focus, except instead of being constantly pompous, he's insecure about it, so he insists on what he wants using techniques best employed by 4-year-olds. Jeremy has tantrums about things outside his control, about the aspects of fame he finds really enraging, such as paparazzi or nonstop interviews after a show when he's exhausted. Reg begins to play a larger role in smoothing those problems out for Jeremy, becoming a personal assistant of sorts, one that's with Jeremy constantly, taking care of the circumstances surrounding Jeremy so that Jeremy can have some peace and sanctuary—and space he needs to grow up a bit.

Reg is perfect because he doesn't really care about any of the fame or attention. He wants to travel and see the world, and accompanying Jeremy as his "pretend boyfriend" will allow him to do that with barely any expenditure on his part. He doesn't want to take advantage of Jeremy; he wants to take advantage of Jeremy's travel plans, and hanging with Jeremy is an additional benefit.

The problem is, Reg is too perfect. Jeremy is often an asshat. He's whiny, temperamental and demanding, and has very few adult coping skills when circumstances are not within his control. Reg helps Jeremy grow, but Reg doesn't really need to evolve or change. He's like a gay pretend boyfriend variation of a manic pixie dream girl: his role is defined by what Jeremy needs. Reg helps Jeremy change and grow into a better person by being the mellow, laid back, self confident role model Jeremy needs, but Reg…doesn't really change at all. He heals and improves Jeremy, but Jeremy doesn't really bring anything to Reg except external things that aren't conflicts, like jets and whatnot. Reg doesn't change. Reg takes care of Jeremy until Jeremy can recognize that he loves Reg and that he's (SURPRISE) gay.

Whether he's been gay all along and just figured it out, or whether he's gay for Reg, either way it bothered me. There were no signs whatsoever in adolescence? No indication that women didn't do it for him? Apparently not—Jeremy's understanding of his feelings for Reg and what they mean in a larger context are as much as surprise to him as to everyone around him (except the reader since presumably she read the back-cover copy).

I did like a few aspects of their relationship. One of the things Jeremy is so fascinated by in Reg is that Reg will go do things like whitewater rafting or spelunking or bungee jumping because they're fun. Activities like these have never been accessible to Jeremy: one, because he doesn't know how or where to do them, and two, because he's a bit too famous to wander around undisguised. But when Reg meets Jeremy and Reg talks about how much fun he'd have if he were traveling the world, Jeremy is as attracted to Reg's ideas as he is to Reg himself (though he can't admit that second part). I liked that Reg was showing Jeremy how much there was to enjoy about the world he was traveling, though there weren't enough descriptions of the activities they did, just mentions that they'd been done.

There wasn't enough of a lot of things, really. No exploration of the music, of Jeremy's performances, how he interacts with the crowd, how different he is onstage and off, or the stops they make on the tour and what they do aside from going to and from the concert venue. There is one evening when they sneak out to go to a club, but it was one of the few times where their adventures were explained in more than one or two sentences. The settings are mostly hotels, concert venues, possibly a coffee shop, or transit in between those things.

I liked Reg, and I liked Jeremy, but I felt bad that Reg brought the caring and understanding to Jeremy, and that there wasn't anyone to care for Reg. He was selfless and giving and ultimately too perfect as a character. I don't necessarily need angst and tears in every romance I read, but I needed more from this story in order to look back on it with contentment instead of puzzlement. There was enough to be enjoyable while I read it, but not enough that it withstands scrutiny after the fact.

Sarah Wendell is the co-creator, editor and mastermind of the popular romance blog Smart Bitches, Trashy Books. She loves talking with romance readers, and hopes you'll share your new favorite romance reading recommendations. You can find her on Twitter or on her couch, most likely with her eyeglasses turned toward a book.