When the Snow Falls 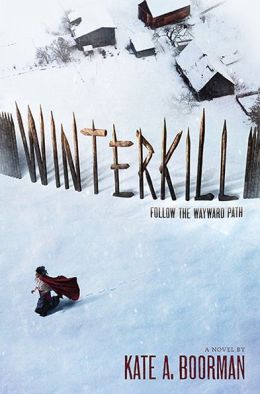 For the last eight decades—five entire generations—the people in Kate A. Boorman’s Winterkill have lived within a fortified compound, only venturing out to forage and to do some minimal farming. In all that time, they’ve never encountered other people; in all that time, they’ve never tried to expand their borders; in all that time, no one has ever questioned the rule of the Council: For one thing, the winters are so harsh that people have gotten lost and died less than 10 steps from their own homes, and for another, there’s a monster out there.

Fifteen-year-old Emmeline is both Stained and Wayward—there’s a lot of the Capitalize Random Words To Make Them Seem More Mysterious And Important trope in the Winterkill universe—meaning that due to the misdeeds of an ancestor, everyone gives her the side eye, and her bad foot (and resulting limp) is seen as physical proof of that. She is dreamy, curious about the past and about the larger world, disinterested in attending Council members’ endless Virtue Talks, and prone to wandering further into the woods than is allowed, all traits that have convinced most of the other people in the compound that she’s bound for trouble…which makes it all the more surprising when one of the Council members takes a romantic interest in her.

Other than the distinctly Canadian setting—or, well, I assumed it was set in Canada, what with the specific mix of cultures and ethnicities and languages (English, French, First Peoples), the climate and landscape, and the fact that the author is Canadian—and other than the reliance on dreams for discovery and decision-making (though that element reads more like simple plot contrivance than a totally integrated aspect of the worldbuilding), most of what Winterkill offers up has appeared elsewhere. There is a love triangle, and more specifically a love triangle that forces a choice (assuming that our heroine HAS to end up with someone) between a man of power who will provide safety and comfort, but whom she doesn’t love; and a younger man whom she does love, but who can promise neither of those things. And, of course, she ultimately turns out to be the Chosen One, Fated To Change The World.

Beyond those general Been There, Done That elements, here are a few other books I thought of while reading:

The Forest of Hands and Teeth, by Carrie Ryan

Like Winterkill, this one is set in an isolated, fenced-off world in which the inhabitants don’t know—and aren’t necessarily inclined to find out—whether or not there are others out there. Like Winterkill, it features leaders who’re keeping vital information from their followers, and like Winterkill, it reads more like historical fiction than speculative fiction.

Escape from Eden, by Elisa Nader

Set in the present, and in a completely different climate, but this cult story has a lot in common with Winterkill as well—not just in the relationship between the Council and the “regular” folk, but also in how the Final Showdown plays out.

After the Snow, by S.D. Crockett

The major similarity here is in the weather—winter is on its way in Winterkill, while winter is pretty much endless in After the Snow—but it features such an amazingly original voice that I had to include it.

The Scarlet Letter, by Nathaniel Hawthorne

A community that is all too ready and willing to throw people under the bus due to habit, fear or supposedly high standards of morality? Check. Heroine who bears a physical reminder of her “sin”? Check. Romantic interest who’s into self-flagellation? CHECK.

Winterkill is the first in a trilogy. I’m genuinely unsure as to whether or not I’ll be reading Book Two.