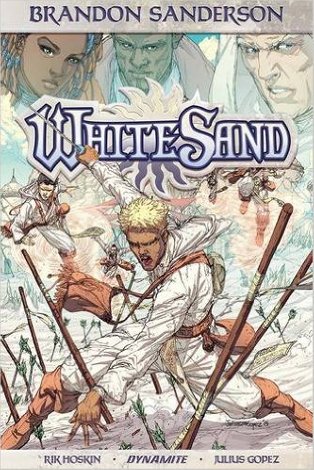 Okay, I admit it – I love when a novelist tackles writing comic books. Especially someone who writes those massive tomes filled with page after page of characters and worldbuilding. The two mediums are so different. Translating novel-writing skills to comics can’t be easy given how they convey the bulk of the story through images and dialogue. You don’t have the luxury of writing tens of thousands of words. Making that switch, you could get it wrong, it could fall flat.

White Sand Volume 1 from Brandon Sanderson doesn’t do that. It’s the kind of graphic novel I absolutely adore. It feels heavier than its 160 pages. And in those pages, Sanderson, Rik Hoskin (Script) and Julius M. Gopez (Art), display a fascinating world. What I didn’t know going in? This is an adaptation of an unpublished novel, set in Sanderson’s Cosmere Cycle where Mistborn, Elantris, and The Stormlight Archive exist. It’s the first of three planned books.

On the planet Taldain, Kenton has a lot to prove. He is the son of the Lord Mastrell, a powerful Sand Master and leader of the Diem. But Kenton doesn’t have any of the

Lord Mastrell’s power, nor his respect. In fact, he can barely move sand at all. But he’s clever, and good with a sword, and has applied himself to learning everything he can in order to prove himself to his father. Within the Diem, though, only the Sand Masters can have rank of worth, and Kenton would be a Mastrell or nothing. This leads him to take The Mastrell’s Path, a dangerous race through the sands seeking five spheres hidden there, and he has to find them and complete the race in 100 minutes, or else fail completely. He sees this as his last chance to prove himself worthy. But even his victory in the Path does little to sway his father.

When the Kerztians, an ancient enemy, ambush the Sand Masters, all hell breaks loose. The attack makes no sense, is brutal and devastating. Kenton finds himself alone in the desert, rescued by a group of Darksiders. Having lived his entire life in the sun, these newcomers are curious to him. They speak Dynastic, a language taught to him by his mother. They, having lived their entire lives without the sun, need a guide. Kenton agrees to guide them to the nearest town. But helping them only brings more danger and another attack by the Kerztians. And this time, Kenton finds he can’t even muster the power he once had to defend himself.

This book is amazing. The worldbuilding is dense and deep. We spend all of our time on the ‘Dayside’, a mostly-desert island with a fractured and diverse culture. The magic system – the way the Sand Masters can manipulate the sands, draw energy from the grains and even water – is very cool. Used sand turns black but the energy from the sun replenishes them. Using magic also dehydrates a Sand Master, so they have to be aware of how much power they’re using. The political structure is interesting and complex. At some points, I had to reread in order to catch up. There’s a great moment where we get a glimpse of how things on the Darkside of the planet work, which is something I hope we get more of in future volumes.

Brandon Sanderson is an amazing author. His novels are addictive. White Sands is a fantastic new addition to his growing list of books. Highly recommend.