Why I Love Retro Science Fiction 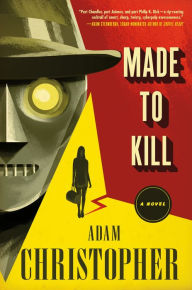 One of the marvelous things about literature is how it evolves over time. Many liken the progression of published books to an ongoing and unending conversation between writers, or as a living thing itself that changes with current events. The former case can mean something as simple as one writer playing off the themes of another, evolving those ideas or putting his or her own unique spin on it. The latter case might be the result of writers expressing their views on recent news stories. In either case, literature can be seen as something that does not stay static. It changes and grows.

There are reasons to be thankful that it does. Nobody wants to read the same thing over and over again. But there's a downside as well. It means that sometimes the kind of fiction you like to read becomes outdated. This is glaringly obvious in my usual reading sandbox, science fiction. The stories of today are definitely not like the stories of yesteryear. There's nothing wrong with that—there are tons of fantastic stories being published today—but it does mean that the old-timey science fiction of days gone by could be going the way of the dinosaur.

What is Retro Science Fiction?

Simply put, retro-futurism is what people of the past thought their future might look like. It's our great-grandparents' depiction of today. Or, the future that could-have-been.

Retro futures can be observed in many mediums: books, television, film, even sculpture. When you see an "old school" ray gun, you're looking at a retro future. When you see the people wearing shiny white uniforms on Moonbase Alpha in Space: 1999, that's the show's creators' view of how people in their future might dress. When you see Captain Kirk pull out his cellphone—er, personal communicator—you're seeing someone from the past predict what cool gadgets the future might bring.

The Appeal of the Glorious Days of Yesteryear

Sometimes past visions of the future become reality. Star Trek's omnipresent communicators work well as a precursor to today's smartphones, for example.

(Yes, Kirk, you're always right. *rolls eyes*) More often than not, those predictions and visions of the future are oh-so-wonderfully wrong. A friend of mine refuses to read older science fiction for that very reason. They got the future wrong, he says. And yet, for me, that's one of the reasons why I love it. From a historical standpoint, it's interesting to see where people thought they might be headed, what they got right, and what they got wrong. From an academic science-fiction perspective, it's fascinating to see how writers used to imagine the future. And yes, they often got things wrong. But that's to be expected, isn't it? Science fiction is not reall

y about predicting the future. Writers don't set out to be fortune tellers, they want to write stories about people in the present.

What else is appealing about a retro-future? More than anything, retro-futurism is a flavor. It's a specific taste of science fiction. Trying to describe it any further is like trying to describe vanilla. Retro-futurism is also a style. It's the way writers wrote science fiction in the past. Generally speaking, writers today are much more rigorous in their writing than the writers who were trying to meet the demand of weekly pulp publication serials. The resulting science fiction from that past era was plot-driven and didn't spend pages discussing, say, some planet's terrain. That made the stories shorter as well. Books from decades ago were 150 pages long and that was just fine.

Retro-futures are also kitschy. There's a nostalgic quality to it. This is a little harder to describe. I tend to like the kind of science fiction that was written before I was born. Perhaps it's because when I started reading science fiction, I often read older books that crossed my path. In the 1970s, I was weaned on sci-fi from the Golden Age and that mode of science fiction still appeals to me.

There are pros and cons of science fiction written by previous generations. Times were different and, just like literature, culture changes. Modern science fiction is a bit older and wiser than the sci-fi of yesteryear so it's not uncommon for older sci-fi to elicit a few raised eyebrows when read by modern audiences. Views were simply different on gender and race relations, for example. In that regard, older sci-fi serves as a reminder of how we've grown as a society.

Written for a Modern Audience

The appeals of retro sci-fi I've described above could easily apply to classic science fiction in general. What makes it "retro" is that those same depictions of the future are transplanted to today. It's about the "looking back" and seeing how it used to be done. Retro science fiction doesn't live in one moment—it spans decades. You need to have both sides (past and present) to really have it.

Today's retro sci-fi is written by today's writers, and while modern writers may try to emulate the science fiction of yesteryear, what they rarely, if ever, do is reflect the outdated thinking of those times. In today's retro sci-fi, you will find more discussions of multiple viewpoints and philosophies, you'll see diverse cultures portrayed on a galaxy-wide scale—and you'll see it through the derring-do of space adventurers zipping around in the foreground.

Where to Find Retro Science Fiction

If you are looking to experience some retro science fiction, here are some good starting points:

o  Old Venus edited by George R. R. Martin & Gardner Dozois: A terrific anthology of stories specifically written as homage to the sci-fi of the Golden Age. All the stories are about the Venus that could have been. A previous anthology, Old Mars, gave the planet Mars the same treatment.

o  Made to Kill by Adam Christopher: a noir-ish detective story about the last robot in a retro 1965 Hollywood.

o  Space Vulture by Gary K. Wolf and John J. Myers: a wonderful novel that's a throwback to the pulp adventures of yesteryear.

o  Sky Captain and the World of Tomorrow (film): a reporter teams up with a daredevil pilot to fend off giant robots attacking New York City and search for a team of missing scientists.

o  Iron Giant (film): a classic animated film that will soon be re-released in theaters, The Iron Giant perfectly captures the Cold War paranoia of the 1950s.