The Witch Is Back 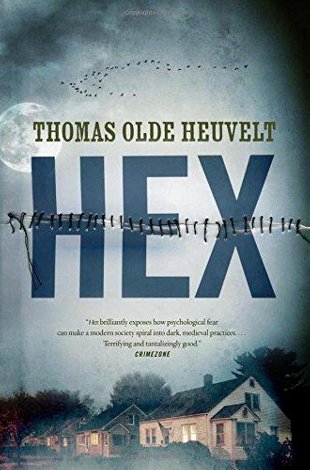 It’s officially autumn—the time of apple picking, and pumpkin-spiced ales and coffees, and, my favorite part of all, horror movies. This horror movie season kicks off with a couple of thrillers (Don’t Breathe) but also a reboot of a seminal film and dear favorite – The Blair Witch Project.

And watching this movie, and thinking about other scare-the-pants-off-of-you witches in film and literature, I immediately thought of a book I read this past summer, but have yet to review: Hex by Thomas Olde Heuvelt. The Blair Witch is pretty damn scary, but she’s got nothing on Katherine (the witch from Hex).

The premise of Hex is original and eerily perfect: there is an idyllic small town in upstate New York called Black Spring. For many generations, the good people of Black Rock have been good neighbors and united in their friendly, if aloof, way—there are local festivals to which outsiders are welcome, of course, and short-term visitors can pass in and out of the town’s borders without problem. But underneath this quaint exterior, the people of Black Spring hide a dark, festering secret: they all live in the ever-present terror of the Black Rock Witch.

Katherine van Wyler is a ghost. Centuries earlier in the town’s speckled past, she was tried and executed for witchcraft, and has since remained a blight on the town and placed a curse on all of its people. You see, Katherine can show up anywhere within the town’s borders—following her normal routine walking through the town’s main square, appearing as a silent specter at the dinner table, or materializing in your own bedroom. With her decaying flesh, her eyelids sewn shut with black thread and her lips stitched together with the same, Katherine is an ever-present malevolence. Somehow, the townspeople have figured out their own ways of dealing with her. They track her movements with a closed app; they casually refer to her as “gramma” and generally try to ignore, or at least quietly accept, her presence.

The townspeople of Black Spring have no other option, you see. Once you move to Black Spring, you can never leave. Oh, sure, you can leave the town borders for a few hours, even a few days. But soon enough, Katherine’s hex will reach you—you’ll start to have suicidal thoughts, and should you wait longer, you will kill yourself. Many have tried. All have ended in defeat, or death.

The elders and inhabitants of Black Spring all agree to a simple code – no one must ever photograph or film Katherine, and no one from the outside world can ever know of her existence. (Others have tried in the past, and it just leads to more calamity.)

Enter a group of teenagers, with the rebellious stubbornness of youth, convinced they know everything and that the elders are wrong. These teens have one mission – to open the world’s eyes to Katherine. And that is where everything starts to go downhill.

Hex is the first work I’ve read from Thomas Olde Heuvelt, and, as far as premises and atmospheric terror-factor go, it’s nearly perfect. I love a good enclosed space trope, and that’s essentially what Hex is—instead of a ship traveling through the vacuum of space or the high seas, it’s a town curse from which there is no escape or respite. The horror of Katherine’s presence—suddenly appearing in situations that are alternately black-comedy humorous (in the kitchen during dinner, with a dishcloth thrown over her face) and drop-dead terrifying (next to your bed while you’re trying to sleep)—is perfectly handled. Heuvelt also manages to create a sense of claustrophobia and mounting horror—the teenagers who feel like they’ve been cheated of their entire lives (no college, or outside dates, or traveling the world, or careers) have justifiable rage, and Heuvelt skillfully plays this against the mounting pressure and tension as they exact their rage on Katherine.

On the character front, however, things are a little shakier. There isn’t really anyone to identify with in this book—the main character father figure, Steve, is your stock Rick Grimes kinda dude (aka, a good husband and father driven to terrible things for his family, especially idealistic teenage son Tyler who is the reason for all the things happening in Hex, but in the generic way of the white male hero character), and his family similarly predictable and archetypal. The novel also features your classic Disturbed Teenage Boys, the ringleader being a sadistic jerk who takes to cutting, squeezing, sticking the Black Rock Witch in horrible ways that of course lead to his undoing. The archetypal nature of the characters don’t bother me too much, though—this is a book you read for atmosphere and a sense of being completely, utterly scared. For the most part, Hex accomplishes this. Things start to derail in the book’s final act, when Katherine has (of course) been unleashed and Steve must figure out how to make things right—the ending of the book itself falls apart and doesn’t live up to the novel’s initial promise.

That said, Hex is still one of the scariest, truly horrifying ghost stories I’ve read in a while—probably since Dark Matter by Michelle Paver. This is an excellent, atmospheric tale of terror, and I can’t think of anything better—or any ghostly witch better—to ring in the fall. That includes the Blair Witch.

Read it and keep the lights on.

In Book Smugglerish, 8 stiched eyelids out of 10.