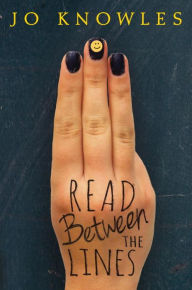 With the end of the year comes Best Book season—as always, see Largehearted Boy for an ongoing compilation of lists—but because I like to read as many books as possible before choosing my favorites, I’ve got a whole pile to squeeze in before making any decisions. Because holy cow, my friends, the YEAR ISN’T OVER YET.

The 2015 titles that I want to get to before year’s end are, in no particular order:

Read Between the Lines, by Jo Knowles

A day in the lives of one teacher and nine students, each one at some point giving (or receiving) “the finger.” Perception and reality; the difference between seeing a person from the outside and actually being in that skin. Ten perspectives is a LOT in one book, but if anyone can pull it off, Knowles can.

All the Rage, by Courtney Summers

I admit it, I’ve been avoiding this one because I’m more than a little bit scared that it’s going to devastate me. Rape and its aftermath in a small town; bullying and betrayal and survival and, yes, rage. I love Summers’ willingness to write female characters who allow themselves to be angry, girls who don’t always go the “nice” route.

An Ember in the Ashes, by Sabaa Tahir

Fantasy set in an ancient Rome–like

world, about a girl who goes undercover into a military academy—as a slave, not as a cadet—in order to save her brother, and the assassin-who-doesn’t-want-to-be-an-assassin with whom she has more in common that either of them would have ever expected. Political intrigue, action, plot twists—I’m hoping that it’s just as much of a page-turner as everyone has promised.

Cut Both Ways, by Carrie Mesrobian

Will, a high school senior, gets sexually and romantically involved with two people: his best friend, Angus, and Brandy, a girl in the sophomore class. Rather than being purely about him figuring out his own sexuality—although according to everything I’ve read, that certainly figures in—it’s also about the guilt and shame that comes from being unfaithful. There’s also a whole arc about home renovation that, as the daughter of a carpenter who married a carpenter, has my interest piqued, piqued, piqued.

I actually haven’t read descriptions of this one at all, because I like to go into Hardinge’s books entirely cold—but I’m expecting dark and fantastical and complex and meaty and beautifully written and original and basically every good thing packed into one book. But my expectations aren’t high o

Under a Painted Sky, by Stacey Lee

A historical Western about two girls—Samantha, who is Chinese-American and orphaned, and Annamae, who is African-American and has escaped slavery—who dress as boys and head out on the Oregon Trail toward California and freedom. I know that the book will deal with prejudice and cruelty and discrimination, but something about that cover art just makes me want to start drawing hearts all over everything.

The Wrath and the Dawn, by Renée Ahdieh

A Thousand Nights, by E.K. Johnston

There are tons of re-tellings of 1,001 Arabian Nights out there, but I am always up for more, more, more. The Kirkus review of Ahdieh’s book uses the phrase “soapy melodrama,” which, YES PLEASE, while the review of Johnson’s book uses “detailed and quiet,” which also merits a YES PLEASE.

A ghost hunter heads to the land of the dead in an attempt to free herself from her duty. Everyone I know who’s read this has LOVED it for the writing and worldbuilding and the characterization and for its originality. So, basically, everyone I know who has read it has loved it for ALL OF THE REASONS.

Saint Anything, by Sarah Dessen

I’ve been saving it for a rainy day, but at this rate, I might have to break it out on a SNOWY day. Dessen usually feels like summer to me, so maybe it’s a good thing that I’ve saved this one for this time of year?

What’s on your TBR list for the rest of the year, and what else should be on mine?