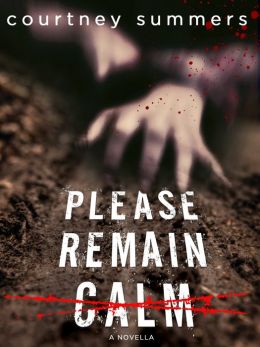 “I wonder if all hearts are made with the same pockets for fear and pain and sadness. They must not be, or if they are, maybe we all don’t know how to use them. Because otherwise so many of our stories would have ended differently.”

In 2012, Courtney Summers wrote a book called This Is Not a Test—her take on the zombie apocalypse, from the perspective of a teenage girl named Sloane. In that novel, the terror is both psychological and physical: Sloane deals with the trauma of her abusive home life, and then the dead start rising from their graves and devouring the living. Sloane, along with a handful of other teens, inexplicably find themselves locked in their school with limited supplies and no information of the outside world. When things go bad in their stronghold (don’t they always go bad in well-fortified spots?), Sloane and a boy named Rhys decide to leave and strike out for a new safe haven—a distant government installation, where the calm voice on the radio instructs them to head.

It is here that Please Remain Calm begins.

On the road, with limited supplies and a vague sense of direction, Rhys and Sloane make their way through their gutted, dead-overrun town. Things in the outside world, the two discover, are very, very bad. And they only get worse when Rhys fears that Sloane is giving up her fight to survive, and the pair is separated in a zombie attack. Fearing the worst, that he is all alone in the world, Rhys stumbles on hope—hope that there is still something worth fighting for and surviving for in this wasteland of a world. Hope that Sloane might still be alive; hope that there could be some semblance of life and hapiness, if he can manage to hold on to it tight enough.

A novella and direct sequel to This Is Not a Test, Please Remain Calm is anything but calming, or mundane, or reassuring. (In fact, I can’t help but feel like that title is mocking me because holy freaking crap, this novella is intense.) Unlike Test, which was told from Sloane’s claustrophobic perspective, this second story is filtered through Rhys’s point of view. It’s fascinating, as from Sloane’s perspective in the first book, one’s never really quite sure how Rhys feels or where he stands. In Please Remain Calm, the charac

ter is given a desperate, powerful, and altogether different voice from Sloane—Rhys, it becomes clear, cares very much about what happens to him, to Sloane, to the other sad survivors in this messed up corpse-ridden world. (I should note here, too, that while this is a second story in a series—or just a duology?—one could read Please Remain Calm as a stand-alone novella.)

In true Courtney Summers fashion, the characters are eloquent and fully realized, and there’s a sense of intense desperation that pervades the entire novella. The external threat of a zombie hoard spotting Rhys and crew is terrifying enough, but more powerful are the hard conclusions that Rhys observes on his harrowing trek.

“It hits me: that's going to die with me, that story. My story. My family, everyone in the school, their stories too–I'm the last person who could tell them and if I die, they're gone.”

And then there’s the ending of the novella.

Chew up my heart and spit it out, why don’t you, Courtney Summers?!

I won’t spoil it, but if you’re looking for a powerful, emotional novella about the end of the world, about relationships and characters who matter—read Please Remain Calm. And then commence freaking out and decidedly not staying calm.

You want zombies and heart in a story? This one’s for you.

In Book Smugglerish: 8 desperate shambling corpses out of 10.