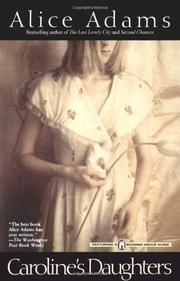 The documentary muse of northern California's artistic upper-middle-class (Second Chances, 1988, etc.) toys with but never tackles the dangerous, fashionable issue of incest. The story—such as it is—goes like this: Caroline, a handsome affluent woman in her 60s, is returning to San Francisco with her third husband, Ralph, after a five-year sojourn in Portugal, taken so that Caroline could separate herself from the dramas of her five grown daughters: Sage, a pale, stooped potter of 40, who five years ago was having a disastrous affair with an older local pol named Roland Gallo and who since has married a flirt (and worse) named Noel; Fiona, petite, blond, and chic, proud owner of a trendy S.F. restaurant named after herself, who now is having her own affair with Roland Gallo; Jill, slightly younger facsimile of Fiona, an investment banker and part-time call-girl who is carrying on an affair with (yes) Noel; Liza, married, with three children, and worrisome only because she seems so contented; and young Portia, only daughter of Caroline and Ralph, who's been drifting until she discovers she's a lesbian. Well, Ralph dies of a heart attack: Sage attempts to seduce her stepfather, Caroline's second husband Jim McAndrew, and, when she fails, divorces Noel and becomes rich and famous from her pottery; Fiona's restaurant goes under, and Fiona is jilted by Gallo, who (it turns out) has always really lusted after Caroline; Jill is caught in a call-girl sting and later suffers injuries in a car accident with Noel; Liza publishes a short story; Portia inherits a house and takes a woman lover; and Caroline flees to Italy, with Roland Gallo in hot pursuit. In case all this leads you to imagine that Adams's latest has a plot--it doesn't. But it does have lots of food and wine, plenty of architecture, and constant emotional innuendo delivered in the author's patented mannered prose.