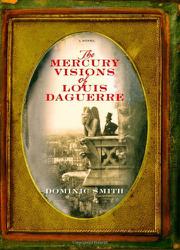 THE MERCURY VISIONS OF LOUIS DAGUERRE

Smith’s beautifully written debut uses the life of photography’s inventor as the framework for a touching tale of youthful love regained in maturity.

In the spring of 1847, 58-year-old Louis Daguerre is wealthy and famous, thanks to his discovery of the process by which visual images can be given physical reality: “[H]ere was time stolen, wafered, and pressed onto silvered copper; here were nature’s blueprints, transcripts of light . . . replicated in nuance, shadow, and substance.” Mortally ill from exposure to the toxic chemicals used in that process, he’s convinced by one of his “mercury visions” that the world is about to end. Daguerre asks his friend Charles Baudelaire to help him find a woman willing to pose naked for a daguerreotype; it’s one of the images he wants to immortalize before the apocalypse. He’s also trying to find Isobel Le Fournier, the family maid he fell in love with when he was 12, on the same day he first was mesmerized by the magical qualities of sunlight. Isobel slipped out of his life the year he went to Paris as apprentice to a scene painter, but Louis remained haunted by his lost love as he pursued his goal of capturing the world around him with a realism beyond painting. Skillfully interweaving Daguerre’s memories with the present-day action, the author joins the two narrative strands when Louis learns that his nude model, Chloe, is Isobel’s daughter (a wild coincidence that passes muster in the novel’s dreamlike atmosphere). Violence, which has shadowed Daguerre’s life since his birth during the French Revolution, once again marks him during the disturbances of 1848, when Louis is shot and Chloe takes him to her mother to be healed. In the countryside, the bitter older woman and her chastened but still-ardent suitor finally come to terms with their past and steal a few weeks of happiness they both know cannot last.

A compelling psychological study, a thoughtful tracing of the birth of a new art form and an atmospheric portrait of 19th-century France: impressive on all three counts.

THE BEAUTIFUL MISCELLANEOUS
by Dominic Smith