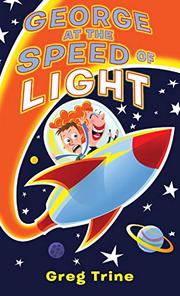 GEORGE AT THE SPEED OF LIGHT

When aliens kidnap a boy, his older brother, his grandmother, and her spaceship come to the rescue in this middle-grade SF novel.

People have been thinking that Grandma Mullin is crazy ever since, a few months ago, she claimed that aliens yanked her husband into their spaceship through a beam of light. He hasn’t been seen since. Nevertheless, while their parents take a cruise, George Mullin, 11, and his younger brother, Pete, are being sent to their grandmother’s house, flying from California to Colorado. Grandma wins over her grandsons with root beer floats, new high-tops, and July Fourth bottle rockets—and then, the aliens come back to abduct Pete. Grandma reveals that she’s not crazy; she’s an alien hunter with her own spaceship hidden in the backyard, which takes her and George to the extraterrestrials’ home, Planet Flerk. In a crash landing, Grandma breaks her leg, and George has to set out alone with nothing but a tracking device, a slingshot, and a lighter. He faces many dangers, including murderous dwarves and pirates, but gains allies, such as Rover, a talking Labrador dog/hippo; and Slim, a cabin boy aboard the pirates’ spaceship. As George performs more than one rescue, he figures out his future profession: “Kicking some alien butt” is “what we Mullins do.” Trine (The Revenge of the McNasty Brothers, 2015, etc.), a prolific author of children’s books, writes a very entertaining space adventure/coming-of-age tale. George’s road to realizing his destiny parallels his newfound appreciation of his grandparents, both former test pilots, and their daring spirits. The book also succeeds as a comic novel, with many amusing scenarios. For example, in Flerk’s rather tentative police force, one cop responds to a hovercraft theft by yelling polite requests for its return: “Do the right thing! I mean it!” Trine packs a lot of action and a few surprises into his story, keeping things effectively moving, with a pleasing conclusion that leaves open the possibility of further escapades. Koehler’s (Santa’s Dog, 2018, etc.) quirky, cool, stylish illustrations deftly match the text.

A fast-paced, funny, and satisfying space tale, with a warm family feeling.