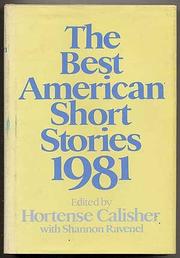 This new Best Stories collection, the weakest in years, should not necessarily lead to generalizations about the sad state of the American short story--because the problem may have more to do with editorial judgment. Calisher, who provides a preening, empty introducton, seems to have played it supposedly safe, choosing many big-name authors and New Yorker contributions. But the result is mostly undistinguished, with under-par work by such writers as Walter Abish, Max Apple, Robert Coover, Mavis Gallant, Alice Munro (an unusually poor story for her), Richard Stern, John Updike, Larry Woiwode . . . and Ann Beattie, whose interminable "Winter 1978" is selfindulgent and nearly incoherent. Only five stories out of the 20 here, in fact, seem genuinely outstanding. Andre Dubus' "The Winter Father" (from Finding a Girl in America, 1980) is a story of divorce that's somewhat unshapely but often touching in its asceticism. Elizabeth Hardwick's "The Bookseller" is, if you can imagine it, a New York story told in a Viennese manner--a perceptive cultural vignette with stately, shrugging cadences of knowledge. Bobble Ann Mason's "Shiloh," though marred by its ending, is deeply controlled. And there are two superb entries: Amelia Moseley's "The Mountains Where Cithaeron Is," a contemporary yet pagan fantasy of a society where mother is, quite naturally, also wife--a story of extraordinary, mysterious alignment; and Cynthia Ozick's "The Shawl" (the first-prize-winner of the O. Henry Awards collection, p. 293)--a fragment of Hell, pathos made scarifying in the concentration camps. Very few standouts, much inferior, unflattering work: a definite dip in quality and authority for this usually-solid series.
Pub Date: Oct. 1st, 1981
ISBN: 0395312590
Publisher: Houghton Mifflin
Review Posted Online: March 23rd, 2012
Kirkus Reviews Issue: Oct. 1st, 1981

NEW STORIES FROM THE SOUTH
by Shannon Ravenel