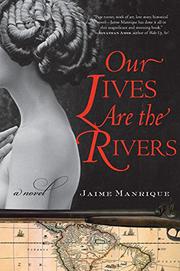 OUR LIVES ARE THE RIVERS

The story of Manuela Sáenz, mistress of the Liberator, Simón Bolívar, who chased the Spanish out of South America.

Quito, Ecuador, 1822. Bolívar, liberator of Venezuela and Colombia, enters the city as a conquering hero. Only 25, Manuela is a hero herself, having helped Peru attain its independence. She makes a play for the Liberator at the victory ball; captivated by her beauty and political savvy, he invites her to his room. Does the fact she’s married give Manuela pause? Hell, no! Off to a strong start, Manrique (Latin Moon in Manhattan, 1992, etc.) backtracks to Manuela’s origins. Born illegitimate on an Ecuadorean hacienda; raised by a hateful aunt and equally hateful nuns at a Quito boarding school, with only her female slaves, Jonotás and Natán, for friends; eventually acknowledged by her father, a wealthy businessman; married off by him to an English fleet owner living in Peru, where she joins the underground independence movement. Defying her husband, she lives openly with Bolívar in Lima until he returns to the battlefield, “his true mistress,” on which Manuela will cut a dashing figure herself. But there’s no drama there, for her military exploits will be narrated dryly by Natán. Lima is the high point for the lovers; they will have two much more difficult years together in Bogotá, Colombia, a hotbed of intrigue, before Bolívar dies. The much younger Manuela, now destitute, will live on for years, sustained by memories of the great man. The juicy tale of passion between two history-shaping free spirits, promised in that opening scene, never quite materializes. This is partly because the lovers are so often apart, but also because Manrique feels the need to provide historical balance, involving a synopsis of Colombia’s convoluted politics and Natán’s awkwardly inserted opinions that Bolívar is “cold and ruthless” and that the lovers have the makings of tyrants.

A welcome spotlight on a neglected historical figure, but Manrique wobbles toward the end.

TWILIGHT AT THE EQUATOR
by Jaime Manrique
Fiction