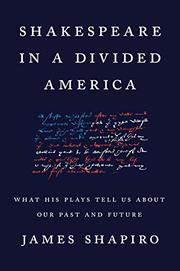 SHAKESPEARE IN A DIVIDED AMERICA

What His Plays Tell Us About Our Past and Future
by James Shapiro
BUY NOW FROM
AMAZON
BARNES & NOBLE
LOCAL BOOKSELLER
GET WEEKLY BOOK RECOMMENDATIONS:

How the Bard has played in America over the centuries.

Shakespearean scholar Shapiro (English and Comparative Literature/Columbia Univ.; The Year of Lear: Shakespeare in 1606, 2015, etc.) admits that “it was the election of Donald Trump in 2016 that convinced me to write about Shakespeare in a divided America.” Impeccably researched, the book focuses on how key figures in American history have experienced Shakespeare. Each chapter revolves around a play or two and what was happening socially and politically. Shapiro sets the stage with a discussion of the controversial Central Park production of Julius Caesar a month after the election. The assassination of Caesar by Brutus was seen by some as an attack on the president. The play, writes the author, “spoke directly to the political vertigo many Americans were experiencing.” Shapiro begins exploring that vertigo in 1833, focusing on slavery, miscegenation, Othello, the celebrated English actress Fanny Kemble, and former president John Quincy Adams’ disdain for a play about a black man and a white woman. After discussions of “Manifest Destiny” (Romeo and Juliet) and “Class Warfare” (Macbeth), one of Shapiro’s best chapters explores the juxtaposition between Abraham Lincoln, who loved Shakespeare and could quote from the works at length, and actor John Wilkes Booth. Shapiro wonders if Booth’s first-ever performance in Julius Caesar just months before Lincoln’s reelection “fueled [his] violent intentions.” Congressman Henry Cabot Lodge’s 1916 description of The Tempest’s Caliban as the “missing link” shows how Shakespeare would be “implicated in the story of American immigration.” Front and center in “Marriage: 1948” is the story of The Taming of the Shrew and how it became Kiss Me, Kate, one of the “most enduring and successful American musicals.” It was “staggering,” Shapiro writes, “what [Cole] Porter got away with.” Lastly, “Adultery and Same-Sex Love” weaves together Twelfth Night, playwright Tom Stoppard, and producer Harvey Weinstein’s demand that Shakespeare in Love have a “happy ending.”

A thought-provoking, captivating lesson in how literature and history intermingle.

THE YEAR OF LEAR
by James Shapiro
Nonfiction

CONTESTED WILL
by James Shapiro
Nonfiction

SHAKESPEARE AND THE JEWS
by James Shapiro
Newsletter sign-up