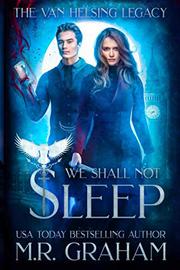 WE SHALL NOT SLEEP

In Graham’s (A Monstrous Romance, 2019, etc.) novel, Meg van Helsing has a dangerous adventure in a world of monsters and heroes.

It’s 1919, and Meg knows that “That Book” by Bram Stoker is far from a work of fiction. She’s always at the ready to vanquish supernatural horrors with weapons in hand, a crucifix around her neck, and her closest friend, Chessie, by her side. When their pal Quincey Harker disappears one night, it’s only the start of a dark chain of events that’s connected to a group of six friends who defeated the infamous Count Dracula 25 years ago. Soon Meg and her allies are fighting off increasingly vicious monster attacks and eventually receive the support of the Monmouth Royal Academy of the Teratological Sciences and its researchers, including the dangerously charming Gheorghe “Geordie” Apostol. Geordie has a dark secret, and his knowledge of sorcery proves to be essential in understanding—and fending off—the dangers that they face. The dangers mount, and bodies fall, as Meg and her friends confront an occult enemy with a hidden agenda. Graham imagines a world in which the characters who vanquished Dracula, and their descendants, combat evil under the tutelage of Abraham van Helsing (Meg’s uncle) and Mina Harker (Quincey’s mother). Graham deftly explores Meg’s closest relationships, especially with Chessie, the daughter of Arthur Holmwood—yet another of several characters from Stoker’s novel, which will appeal to fans of vampire lore. The close, loving bonds between the various players are among the novel’s greatest strengths. Meg is coded as asexual, and her budding relationship with Geordie is carefully developed, exploring the protagonist’s romantic feelings without erasing her sexual orientation. Overall, the book manages to successfully balance the mystery, horror, and historical fiction genres, although it’s perhaps a bit overlong.

A fun and imaginative take on the Dracula mythos with an engaging female protagonist.