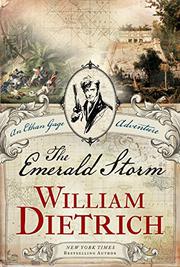 The 19th-century role that a 21st-century Errol Flynn would be born to play.

The fifth historical novel in the Ethan Gage series leaves no swash unbuckled. Though Dietrich (The Barbary Pirates, 2010, etc.) is a college professor who previously shared a Pulitzer Prize for reporting, with this series he is more interested in entertaining than educating. An American and an adventurer, Gage here casts his lot at various turns with the French, the English and a band of Caribbean slaves turned revolutionaries, as he searches for a lost treasure of Aztec myth. Though he announces early on that, “I was more than ready to trade heroism for domesticity. My preference is lover, not fighter. No one tries harder to escape adventure than me, Ethan Gage,” there wouldn’t be much of a novel if he had stuck to such resolve. Yes, he has married the voluptuous, ravishing Astiza, his lover from previous novels, and the two are raising a 3-year old son. Yet he has come into possession of a stolen and extravagant emerald, which could ensure his wealth and secure their future, only to see the jewel snatched by a renegade French policeman who kidnaps their son in the process. So it’s love as well as lucre that drives Gage to recover the jewel, and to employ his wife in her seductive temptress role at pivotal points along the way. “Plain women are more devoted, older ones are more appreciative, but I, too, have an eye for beauty—it’s a fault of mine—and I knew I had to defend the woman I’d married,” muses Gage, after such trickery has imperiled his wife while inflaming his jealousy. Ultimately, the plot finds double-crossing leading to triple-crossing, as the emerald turns out to be merely the tip of an iceberg of lost riches, with Gage and allies who might be enemies conspiring to find it.

A tale filled with rascally derring-do that could have worked better as a graphic novel.

THE SCOURGE OF GOD
by William Dietrich
Fiction