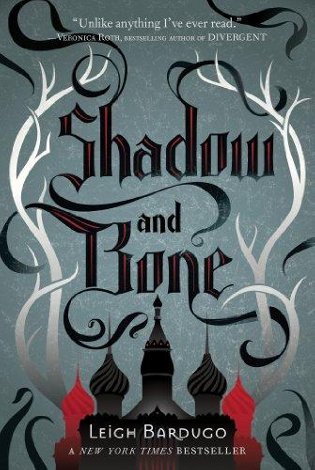 TV and film studios are launching so many projects based on science fiction, fantasy & horror books that it's getting hard to keep up. Fortunately, you're about to learn about another dozen books and series whose television and film adaptations could be heading your way, if all the stars align...

Shadow and Bone by Leigh Bardugo

On the world of Ravka, wars are fought by might and magic. Alina Starkov is an orphaned soldier who suddenly learns that she possesses a powerful magic. Alina is trained by the military elite to fight the enemy of the Shadow Fold, an area of perpetual darkness filled with monsters that feast on human flesh. Bardugo's young adult fantasy follows Alina's journey and her ascent to power and so will the eight-episode series being developed by Netflix. Executive-produced by Bardugo herself, it also taps some of Netflix's top talent, like Bird Box screenwriter Eric Heisserer and Stranger Things executive producer Shawn Levy. Can adaptations of the sequels (Siege and Storm and Ruin and Rising) be far behind?

Our Lady of the Inferno by Preston Fassel

Fassel's unconventional 2018 horror novel is set in 1980s New York, where Nicolette Aster works as a city safety inspector by day. At night she exposes her serial killer tendencies, kidnapping women and letting them run for their life in a dangerous labyrinth she created in a city landfill. But she may have met her match in Ginny Kurva, a smart, Times Square madam who knows martial arts. Screenwriters Laura Moss and Brendan J. O'Brien have been hired to write the screenplay based on this retro-NYC horror story.

In this Bram Stoker Award-Winning novel, an earthquake reveals a secret cave hidden inside Turkey's Mount Ararat. An adventurous couple aims to be the first ones to explore it. They discover the cave is actually a ship and, presumed to be Noah's Ark, it draws the attention of scholars, archaeologists, and filmmakers. An oncoming blizzard traps them in the cave and prevents their escape from the evil they find lurking within a coffin they find there. AGC Studios liked this supernatural thriller so much, they optioned not only this for a television series, but its two sequels The Pandora Room and Red Hands. Production is expected to start later this year.

In author James Herbert's 1983 novel Shrine, a deaf-mute girl named Alice Pagett has a vision of a lady in white who says that Alice is the immaculate conception. Afterwards, Alice can hear, speak, and seemingly perform miracles. When news gets out, thousands of believers make the pilgrimage to Alice's small town to pay tribute. What they don't realize is that Alice has become an agent of evil. Screen Gems recently scooped up the film rights to this classic horror novel. Evan Spiliotopoulos (who wrote 2017's Beauty and the Beast) will write and direct.

When a new adaptation of Huxley's dystopian classic was first reported back in 2015, its prospects looked good because Steven Spielberg's Amblin Television and the SyFy channel were attached. That project, obviously delayed for years, has since morphed. Now, USA Network will air a 10-episode series based on the iconic 1932 novel. David Wiener (Homecoming) will act as the showrunner and screenwriter, working with Grant Morrison (Batman) and Brian Taylor (Crank). Look for the show to maintain many of the same elements as Huxley's book which portrays a supposedly Utopian society where free thinking is outlawed.

The Gentlemen Bastards series of novels (comprised of The Lies of Locke Lamora, Red Seas Under Red Skies, and The Republic of Thieves) has been a longstanding favorite of fantasy fans, notably for its inventive setting and the page-turning adventures of the streetwise thief Locke Lamora. Lamora is the leader of an elite band of con artists known as The Gentleman Bastards who rob the rich people of the city while confronting the ruling criminal underworld. Although a previous adaptation deal expired back in 2010, a new one has emerged, not just for the first novel, but all three. The Gentlemen Bastards series sold to Phoenix Pictures. Here's hoping this fan favorite finally finds its way to the screen.

The One by John Marrs

What if science could match you with your perfect soul mate? That's the promise made by Match Your DNA, a company that claims they have a way to successfully match partners genetically. This breakthrough proves to be revolutionary, making obsolete the traditional ideas of dating and love. But even DNA testing cannot reveal a person's deepest, darkest secrets, as five couples are about to find out. So, too, can viewers when Netflix begins streaming this show after greenlighting an adaptation of this near-future thriller.

Sawyer's fascinating WWW Trilogy (comprised of Wake, Watch, and Wonder) depicts the Internet becoming sentient in the very near future. How? When Caitlin, a young blind girl, is given the ability to "see" the World Wide Web through an implant, she discovers a lurking consciousness there. What follows along the course of the series is the birth of a new and powerful artificial intelligence, assumed to be malevolent by various governments, but actually a benevolent A.I. referred to as Webmind. Sawyer's optimistic story of emerging artificial intelligence will soon be heading to television. Shelley Scarrow (Wynonna Earp) will adapt the screenplay.

City of Ghosts by Victoria Schwab

This ghost story aimed at young adults revolves around Cass, a girl who develops the ability to enter the world of spirits after a near-death experience. It's a gift she'll have to learn to use quickly when she is whisked away to Scotland with her parents, who are hosting a television show about the world's most haunted places. Television, it turns out, is where Schwab's spooky story will end up. The CW is developing a one-hour drama series based on this atmospheric tale.

Shulman's YA fantasy series (comprised of The Grimm Legacy, The Wells Bequest, and The Poe Estate) revolves around in a library in New York that loans out objects of historical value. That library also has a locked, secret room that holds magical artifacts straight out of literature. When those magical items begin to disappear, a group of teenagers must recover them. Shulman's series, which lends itself well to episodic adventures, is being eyed by Disney+, the subscription streaming channel being launched by Disney later this year. Look for this fantasy adventure to be one of their feature projects.