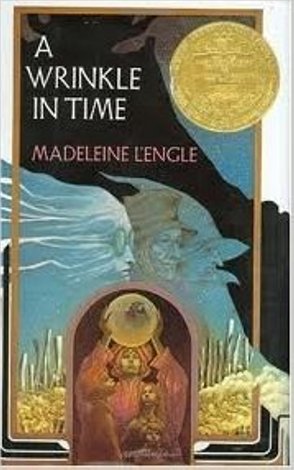 There's no shortage of film and television adaptations based on science fiction and fantasy books.  Here are five more you should know about…

A WRINKLE IN TIME by Madeleine L'Engle

Madeleine L'Engle’s 1962 classic is one of the most beloved children's books of all time. Not only is it a publishing mainstay, it is the winner of the prestigious Newbery Medal for outstanding work in the field of children's literature (among other awards). It follows the adventures of a teenaged girl named Meg and the search for her physicist father, who was working on a mysterious project called the tesseract and has since been abducted by the Dark Thing. Joining Meg are her five-year-old brother Charles, who possesses unique abilities, and Meg's classmate Calvin. Together they are guided on their search through the universe by a trio of women with supernatural powers.

Being a beloved classic, it should be no surprise that A Wrinkle in Time has already been adapted, notably as a 2003 television movie and also as a 2012 graphic novel by Hope Larson. Now it's getting a theatrical film adaptation, too. Director Ava DuVerney (Selma) is directing the film, which is being distributed by Disney Studios. The screenplay is being penned by Jennifer Lee, who wrote the screenplay for the 2013 Disney hit Frozen.

A DISCOVERY OF WITCHES by Deborah Harkness

Can't make up your mind whether to read about vampires of witches? You should know about Deborah Harkness' All Souls Trilogy, which manages to incorporate both. In the first book, A Discovery of Witches, alchemical history professor (and a direct descendant of the Salem witches) Diana Bishop accidentally discovers an old and coveted manuscript that holds the key to great power. That discovery has not gone unnoticed by the evil supernatural forces that wish to claim its power. Diana is thus compelled to embrace the magic she tried to hide at the same time she enters a forbidden romance with geneticist (and centuries old vampire) Matthew Clairmont.

Television adaptation rights for A Discovery of Witches were acquired by the Bad Wolf production company. Screenwriter Ashley Pharoah (Life On Mars) is adapting the novel for the screen, though it's been reported that Harkness herself will also write a few episodes of the series. The production, which will no doubt tap into the novel's stylish historical setting, is also said to be eying the subsequent books in the series: Shadow of Night and The Book of Life.

What marvels will the future bring? If we see the dark future described by Richard K. Morgan's gritty debut novel Altered Carbon, it will be one where death is just a minor hiccup in our potentially limitless lifespans. In Morgan's twenty-fifth century, mankind has spread to the stars and technology has redefined the meaning of life by allowing the wealthy the opportunity to download and save their minds and upload them into new bodies called "sleeves". That's what happens to Ex-U.N. envoy Takeshi Kovacs.  He is killed but subsequently re-sleeved and hired by a man falsely accused of committing suicide (also since re-sleeved) to find his murderer.

Netlflix, the company who has been turning heads with their ever-increasing lineup of quality original programming, and Skydance Television will be co-producing a series based on Richard K. Morgan’s futuristic cyberpunk detective novel. The Netflix project is said to include a 10-episode order. It's being written and executive-produced by Laeta Kalogridis (Avatar, and Terminator Genesis), who acquired the rights to Altered Carbon and the other Takeshi Kovacs novels (2003’s Broken Angels and 2005’s Woken Furies) several years ago.

THE DARK SIDE by Anthony O'Neill

This title should sound very familiar to regular readers of this column. I recently recommended this just-published novel. This offbeat detective story features an incorruptible and exiled cop named Damien Justus who arrives on the moon, now set up as a penal colony, where he investigates a series of brutal murders. The prime suspects in the attacks are the eccentric billionaire founder of the colony and his daughter, but an amnesiac android also holds the key to the grisly crimes.

Fox studios picked up the film rights for O'Neill's sci-fi noir a year before this book was even published. (See? It pays to shop around!) Fox has tapped producers Steve Zaillian and Garrett Basch to oversee the project. Javier Gullón (478 and Enemy) is writing the screenplay. It's still early in the production schedule, so details here are scarce.

WATERSHIP DOWN by Richard Adams

This unique adventure novel is notable for being a well-loved first novel, receiving multiple literary awards, and featuring a cast of animal characters. Don't let that put you off; the anthropomorphized cast is used as a way to deliver a powerful novel that depicts the ever-present struggle between tyranny and freedom.  The plot follows a group of brave rabbits, including one named Fiver, who receives a vision of his warren's imminent destruction.  Unable to convince the leader of the pending doom, Fiver, his brother Hazel and a small group of friends set out to find another home, a quest that proves to be extremely dangerous.

Several adaptations of Watership Down have already been produced (including film, television and theater productions), but that hasn't stopped BBC and Netflix (again Netflix!) from pairing up to produce a new animated version of this timeless adventure.  The new miniseries will feature the voice talents of James McAvoy, Nicholas Hoult, John Boyega, Ben Kingsley, and Gemma Arterton.  The plan is to produce four one-hour episodes where viewers can follow the adventurous exploits of the heroic hares.