A Book That Counts 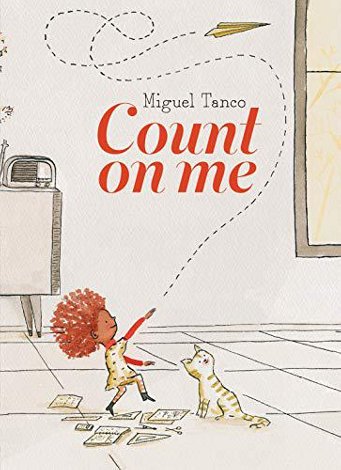 It may be summer, but humor me when I say I’ve seen a new picture book that will be excellent for sharing with students when school is back in session in the fall. It’s Count on Me, a picture book about math from author-illustrator Miguel Tanco, who lives well across the pond from those of us here in the U.S. But given that it’s also a book about finding one’s passion and unique talents and know-how, this is one for sharing in classrooms and libraries all over and in every subject.

“At home, everyone has a passion,” we read on the first spread, as we see a young girl, her cat, and her father. The girl plays chess with her cat (no less), while her father paints at an easel. Clearly, art is his passion. Next, we see her mother looking through a microscope, insects of all sorts pinned to boards around her or hanging in frames on her wall; entomology is what grabs her interest. The girl’s younger brother loves music; we see him playing a massive tuba on the living room couch.

At the girl’s school, she explains, she engages in various activities that could end up being her passion. However, she adds, “I’ve tried them all, but they just aren’t for me.” We see her try her hand at the tuba; play tennis; try karate; sing; cook; and more. Based on the reactions of her friends (and her alarmed cat, who runs in fear from her singing voice), none of these are quite her thing. They not only don’t engage her creatively; she’s also rather lousy at them.

“There is one thing I really like, though … MATH!” We read this on a spread in which her classmates, lined up in two straight rows, paint on canvases, as we’re given a view from behind them. Her teacher stares dumbfounded at the girl’s canvas, because she has filled it with equations and figure drawings of all sorts. From here, spread by spread, the girl—and with a notebook in hand—explains how she sees math all around her: “It’s often hidden,” she tells us, “and I love finding it.”

Tanco, who has published over 40 children’s books, was born and raised in Spain and currently teaches illustration both there and in Italy. With sure but relaxed lines, he fills many of these spreads with patterns that have underlying mathematical structures, such as overlapping circles on the floor of the mother’s office; cobblestoned squares on the streets outside; the inherent geometrical shapes of the playground equipment; and more. The girl sees them all, including the concentric circles that form on the lake when she throws stones. She knows she lives in a world of shapes, and she enjoys spotting them—and engaging with them. She finds herself so wrapped up in the “perfect curve” she sees on a playground slide that behind her streams a long line of frustrated kids on the ladder, as she stands there drawing the curve before sliding, a smile on her face.

A creamy buttermilk hue dominates these spreads with accents of copper, primarily in the protagonist’s curly hair. Tanco keeps the spreads uncluttered so that we can focus our eyes on the natural and man-made patterns that appear in the girl’s world, the ones she herself is so eager to spot.

As any elementary math teacher can tell you, math is everywhere—and it’s tremendously helpful for laying a good foundation in math education to point this out to children at a young age. Talking to preschoolers about pattern awareness has been proven to have positive effects on children’s later understanding of numbers and general mathematical thinking, and this book is a spectacular way to launch such a discussion. The book closes with the girl’s notebook—the notes she’s jotted down about fractals, basic polygons, concentric circles, curve types, solid figures, types of trajectories, and kinds of sets. Each page includes a definition, as well as some drawings the girl has made as she’s moved through her world during a day.

Whether math is a passion or not for the children with whom you share this book, readers everywhere will be able to relate to that search for the subject that fires them up. And you can count on this one for just such a story.