A Brief History of the Dystopian Novel 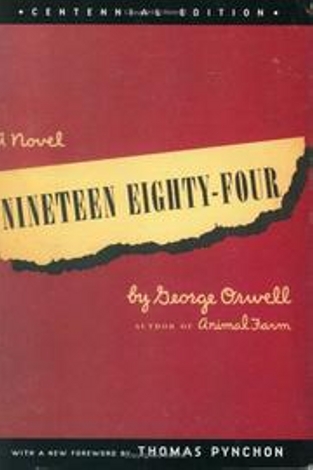 The ongoing saga of Edward Snowden and the information about the NSA Prism system that he leaked has been likened so something out of a near-future thriller novel. The reaction from politicians, the press and the public have ranged from outraged to cautious, and it has gotten me thinking recently about a subgenre of science fiction: dystopian novels. Generally featuring an extreme government that exerts control over its citizens, these stories have been popular warnings over the course of the last century. Brave New Words, a dictionary of science fiction, defines dystopia as "an imagined society or state of affairs in which conditions are extremely bad, especially in which these conditions result from the continuation of some current trend to an extreme." The term is rooted with Sir Thomas More’s book Utopia, which helped to push both the development of dystopian fiction and that of communism. Dystopia tends to be a subjective variation on that, with one person’s dystopia being another’s Utopia.

Science Fiction has strains that are inherently political, and a good, prototype of the subgenre of dystopian stories is H.G. Well's The Time Machine, published in 1895. Well's novel was his first scientific romance, and like his other novels, posited the destructive nature of a stratified society. Of particular interest is when the Time Traveler visits the year 802,701, where his home has been transformed into a Utopian world inhabited by the Eloi, a post-human race. Living in the heights of innocence and comfort, Wells portrays a world that becomes distinctly darker with the appearance of another post-human race, the Morlocks, who prey upon the Eloi. Wells put together his interest in Darwin's evolutionary theories along with his interests in social classes. Interestingly, one of his teachers and main influences was Thomas Henry Huxley, a teacher and advocate for Darwinism: his grandson, Aldous Huxley, who would go on to write another one of the major classics of dystopian literature.

While well-known for his adventure stories, such as Call of the Wild and White Fang, Jack London is also known for his early science fiction novels, most notably his 1906 dystopian novel, The Iron Heel. This novel comes out of London's socialist tendencies, and follows a researcher, who uncovers documents that discuss the foundation of their socialist society in the 27th century. The novel, according to Brian Aldiss in his Billion Year Spree, demonstrates that "London has no real vision of the future; his future is just the present and past, only more so." Like Wells, London looks to class struggle for inspiration, and it’s little wonder that London wrote this novel at the height of the progressive era in the United States, portraying a socialist movement that overthrows the oligarchical elite that oppressed the poor.

Looking across the world to the Soviet Union, one of the most influential dystopian novels is Yevgeny Zamyatin's We, which was first published in 1920. We presents a future that serves as a solid prototype for many following future societies that would appear in science fiction literature. Zamyatin created a world where privacy was nonexistent, where people walked in mathematical precision and where personality and emotions were discouraged. In this tale, a shipbuilder named D-503 works to build the Integral, a spaceship designed to bring the OneState's message to the stars, and along the way, changes when he meets a radical who opens his eyes to a new way of life. Zamyatin, who had participated in the Bolshevik revolution, had come down on the bad side of the Stalinists, and found himself in exile in Europe. Ironically, the book, first published in 1920, wasn't translated into Russian until the 1950s, and even then, wasn’t released in Russia until after the fall of the Soviet Union.

The continuing advance of socialism and communism in Europe helped to bring about one of the greatest works of dystopian fiction: Aldous Huxley’s Brave New World, which first came out in 1932. The grandson of H.G. Well’s mentor, Thomas Huxley, Aldous was inspired by the works of H.G. Wells (and according to George Orwell, Yevgeny Zamyatin's We), taking on the concepts that he saw in his books and creating a satirical version of them, which he called a negative Utopia. Setting his novel far in the future, humanity continues through cloning, and where once again, individualism and free expression are rigorously controlled by the central au

The rise of Adolph Hitler’s Nazi Party helped to inspire the creation of Swastika Night by Katherine Burdekini. Taking Hitler’s wishes for a “Thousand Year Reich” to heart, she published her best known work in 1937 under the name of Murray Constantine. There, she portrayed a world where Nazism persisted 700 years into the future. Books were burned, and women are relegated status of breeders, while Hitler is idolized as a blond, Caucasian god-like figure. The story’s protagonist is shocked to learn that much of the mythology surrounding their world is fabricated, and passes the knowledge on to his son. Ultimately, Hitler’s Nazi Party did take Europe to War, but the Thousand Year Reich never came to be.

Author Ayn Rand is well-known for her libertarian novels. One of her earlier efforts, 1938’s Anthem, portrays a world where personality is discouraged to the point of death and where scientific achievement is seldom permitted. Equality 7-2521 is a rare exception to most individuals, frequently questioning the world around him, before eventually experimenting with electricity and renaming himself Prometheus. There are similarities between Rand’s work and that of Yevgeny Zamyatin’s, but there’s little indication as to whether or not she was actually influenced by We.

The best-known work of dystopian fiction is undoubtedly George Orwell’s masterpiece, Nineteen Eighty-Four, published in 1949. Orwell’s novel came out of the post-WWII movement and was a result of his musings about the nature of the government that emerged out of the devastating conflict. His central character, Winston Smith, helps to ensure that historical documents reflect the current party line, all while being watched by Big Brother and pursued by the Thought Police after an illegal affair. Of all the entries in this subgenre, few have had the impact on the public’s vernacular than that of Nineteen Eighty-Four.

Player Piano, written by Kurt Vonnegut in 1952, follows in the tradition of We and Brave New World, two novels which he admitted to heavily borrowing from, and “adapted to 1952 America and extrapolated to a bitterly comic dystopian vision.” In this world, computers reign supreme, with each person’s future determined by tests that discourage imagination and encourage structured work. Vonnegut looks not only to government, but to the ideals of technological progress and systems and the “alienation of labor: man’s displacement by machines.”

Ray Bradbury’s Fahrenheit 451 first appeared in Galaxy Magazine, and was later expanded in 1953 into a full-length novel. Bradbury wrote the novel at a point in time when he found himself concerned with the direction in which the country was going, at the height of Joseph McCarthy’s highly public anti-communist crusade in 1950. The novel, through its future where books (and sometimes, their owners) were burned by firemen, was a pointed message against anti-intellectualism and learning.

Philip K. Dick is known for his many dystopian stories and paranoid visions of the future. One of his well-known works, Flow My Tears, The Policeman Said was published in 1974. Depicting a United States following a second civil war, internment camps and an authoritarian police rule are the norm, and a popular, genetically engineered talk show host finds himself in new territory when he finds himself missing his identification

1985 brought Margaret Atwood’s chilling novel The Handmaiden's Tale, a novel written in response to fundamental religious doctrine and the implications it might have if taken to an extreme end. The United States has transformed with an extremely religious government that limits women’s rights by essentially turning them into property and forbidding them to read. Offred is a handmaiden in the Republic of Gilead following a violent takeover by a movement called the Sons of Jacob, where she’s paired with a prominent commander to help him father a child. Atwood is critical of the connection between the nature of fundamentalism and government, and it’s a particularly relevant read today.

Middle or high school students in the United States may remember Lois Lowery’s 1993 novel, The Giver. The story starts as a Utopian society with a boy named Jonas, who is assigned to the role of Receiver of Memories, where he sees the differences in society and how the population of his community is controlled. The Giver isn’t the only dystopian story for the young adult market: It’s recently been flooded with books in a similar vein. Suzanne Collins’ Hunger Games trilogy came in 2008, and it’s another example in a long line of dystopian books, following Katniss in the remains of the United States as she’s forced to fight against other children as part of a ritualistic lesson against rebellion.

Dystopian visions are alive and well through to this day. One last notable book isn't a novel, but an anthology of dystopian fiction by John Joseph Adams, Brave New Worlds. The volume serves as an excellent primer of short entries in the genre, ranging from Shirley Jackson's The Lottery all the way to Ken Liu's The Perfect Match. The book also serves as an excellent political look at the genre, alongside another Adams anthology, Wastelands, which looks at the lack of organized government.

An interesting point from a number of these books is that many examine society through the use of another source: a found journal, in which a character notes their observations, or generally views the changes in government or society through the lenses of the past. Science fiction isn’t about the future; rather, its cultural anxieties and observations are wrapped up in the present and taken to an extreme breaking point. There are thousands of other dystopian novels out there; this is just a short list that takes a broad look over the last century. In doing so, it’s interesting to see what forms dystopian literature takes on: concerns about socialism and collectivism, technology and science, religion and societal acceptance. Often presented as a satirical standpoint of the future, dystopian literature contains works that have a chilling kernel of truth to them, and act as a cautionary tale for astute readers. That must be why the books are always the first things to go.