Celebrating the Father Figures in Our Lives 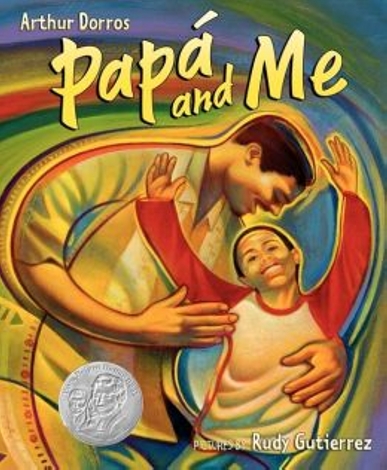 Father’s Day is upon us, and I thought this week that I’d share some of my favorite picture books about fathers and even grandfathers. One of them is new on shelves, but the rest of these are tried and true stories, always good for repeat visits.

Let’s start with Arthur Dorros’ Papá and Me, illustrated by Rudy Gutierrez. It was released in 2008 and was named a Pura Belpré Honor Book, but the paperback edition was just released in April.

This is the story of a young bilingual boy and his father, who spend a happy day together. It teems with joy, which is evident on the very first spread, as the boy wakes his father under a ray of yellow sunlight shining from one of Gutierrez’s highly stylized suns. Spanish text is woven seamlessly into the story, since the boy’s father only speaks Spanish. They make breakfast together and then head out to enjoy each other’s company and even pop in to visit the grandparents. There are no Big Struggles here. Nothing gets in their way. It’s a simple ode to fatherhood, and its cheer is infectious. Guitierrez’s swooping lines, vivid colors, and swirling shapes sing with energy and radiate warmth.

Brand-new on shelves is another one from Dorros—Abuelo, illustrated by Raúl Colón. The book opens with a tiny-print, title page note from the author (blink, and you’ll miss it) about how his Argentinean friend once told him his abuelo gaucho, or grandfather cowboy, and how they rode to Pampa together.

Dorros’ story is told from the point of view of a man looking back on his boyhood, riding with the wind and his Abuelo. In nearly every spread, the boy is looking up at wonder and admiration at his grandfather, who is at such ease out in the elements, riding the trails, guiding his horse with simply a touch or his voice, even facing down mountain lions. (The bo

y later takes what he’s learned on this day to face down a bully at school.) One day, the boy’s family moves to the city, and he’s left with only the memory of Abuelo’s laugh. It’s an adjustment, but he leans on what he has learned from his grandfather and continues to keep in touch. “Now, even when I cannot see Abuelo, he always rides with me,” the book closes, the boy on his bike with the shadow of his grandfather and horse above him. Colón’s textured illustrations, rendered in pencil and watercolor, are expressive, capturing precisely the gentle, affectionate relationship at play here.

If you prefer something a bit more dry-witted, you can always fall back on Neil Gaiman’s The Day I Swapped My Dad for Two Goldfish, illustrated by Dave McKean and initially published way back in 1997. Here’s a dad who, for the entirety of the book, keeps his face behind a newspaper. To her horror, a young girl finds out that her pesky, older brother has swapped Dad for the goldfish his friend brought over. When their mother finds out…well, you can imagine how that goes, if you haven’t already read this delightfully twisted adventure tale. The siblings’ mission to get their father back takes them all over town, as each friend, it turns out, has swapped him for something else. (Who can resist a great gorilla mask?) They eventually retrieve him, admitting “he’s a very good daddy,” even if we readers only ever see a newspaper for a face.

One of the first books that comes to my mind when I think of picture books about fathers is from a Swedish author-illustrator team: Bo R. Holmberg’s A Day with Dad, illustrated in gentle, soft-focused colored pencils by Eva Eriksson. It was originally released in 2008 and is the tenderly-rendered story of a young boy whose newly-divorced mother drops him off to spend a day with his father. Never once is the word “divorce” or “separation” used, but it doesn’t need to be, as it’s evident that Tim’s parents are estranged. Meeting his dad at the train station to spend a whole day together, Tim is thrilled. They don’t do anything spe

ctacular together—on the surface, that is. It’s clear that, to both Tim and his father, doing things like buying hot dogs on Main Street, seeing a movie together, having a pizza dinner afterwards, and merely sitting together in the library reading together (as pictured on the cover) is spectacular enough for them. Using just about every opportunity he gets to point out “this is my dad” with tremendous pride to everyone they encounter that evening, Tim is glued to his father’s side.

The book’s final illustration, where the boy meets back up with his mother at a train and says goodbye to his father, is a wonder: Eriksson conveys so much with the body language of her characters, the mother practically slumping over her son as he rests his sad head against her body. It’s really beautiful stuff, and Holmberg knows exactly the kind of details to which children attend, filling the narrative with it, making the story come to vivid life. Eriksson’s colored pencil illustrations are elegant and (fittingly) subdued.

And I can’t close without mentioning Daniel Beaty’s Knock Knock: My Dad’s Dream for Me, illustrated by Bryan Collier, which a couple weeks ago was named a 2014 Boston-Globe Horn Book Honor book in the Picture Books category. But I wrote about that book and spoke with Beaty here at Kirkus, so go have a look, if you’re so inclined.

Here’s to the fathers, grandfathers, and father figures of our lives—and their day of celebration this weekend.