Finding the Real in the Imaginary with A. F. Harrold 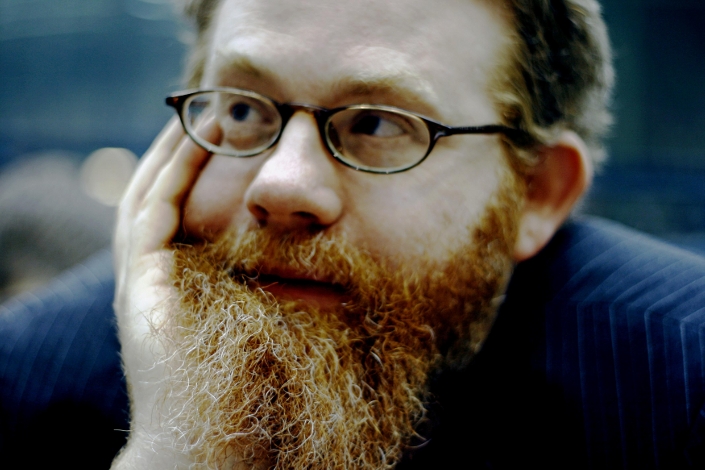 Imaginary friends who have legit feelings of their own are getting a good amount of ink these days. They are no longer the passive creatures of children’s books of yore. The book currently sporting the 2015 Caldecott sticker, in fact, is all about an imaginary creature who sets out to find his own kid. No waiting around for him, thanks very much. He takes matters into his own hands.

Rudger—one of the characters in author and poet A. F. Harrold’s children’s novel The Imaginary, illustrated by Emily Gravett and released overseas last year—is equally assertive in his own ways. His story, coming to American bookshelves in early March, is about his human friend, Amanda Shuffleup, and their extraordinary friendship. When Amanda is in a terrible accident, Rudger starts to fade and also must avoid the grasp of the eerie Mr. Bunting, who hunts and, quite gruesomely, consumes imaginaries. It’s a story that is, at turns, touching and delightfully spooky.

I spoke with Harrold via email to ask him about this fantasy novel.

What were the first few sparks that kicked off this story in your mind?

The Imaginary began with the best prod to a writer’s imagination: a contract. After writing three books about a young lad who lives in a circus—beginning with Fizzlebert Stump: The Boy Who Ran Away From the Circus (and Joined the Library)— I had a contract that [required] another book. It could be another Fizzlebert book, they said, but if you want to write something else….It’s nice not knowing what you’re doing, striking out into the unknown, so I decided to leave Fizz for a while and go elsewhere.

However, earlier I had written a false start to a Fizz story, which saw him lost in the wood and found by a gir

l who mistook him for her imaginary friend (an idea I’m pretty sure was my girlfriend, and live-in-comedian, Iszi Lawrence’s). The girl was called Amanda Shuffleup, and she insisted that Fizz was really her friend Rudger, whom she’d left at home. That story got put in a drawer, and I wrote Fizzlebert Stump: The Boy Who Cried Fish instead, but something about the idea lingered in the air saying, this might interesting.

I began writing what became The Imaginary with just two images. Firstly, there was an imaginary boy who stood by the side of the road after a car accident had killed his real friend, and the question hung in the air: What next? Secondly, the image of a greasy spoon café (or truck stop diner), full of big, burly, stubbly men in tea-stained string vests, eating fried breakfasts and smoking little roll-ups. A weedy little chap with glasses and a clipboard comes in and says, “All right, listen up. Little Timmy. He’s five years old. Best friend’s just moved to Swindon. Likes dogs. Any takers?” And one of the men says, “Yeah, okay. Bert, I’ll do it.” And he goes off through a door, puts on a little cute dog suit (’cause that’s what Timmy wants), and becomes Timmy’s new imaginary friend.

As a pre-writing exercise, I re-read Danny, the Champion of the World, because, well…why wouldn’t you? And I realised that, instead of starting at the moment the Imaginary was left on his own, it would be better to show some of his home life before, and so the book grew in both directions. And Amanda and her mum, who weren’t to have been there at all, became much more important. Everything else changed, and the book became what it became—with the shadows of those initial images that had been floating around in my head for a while, lurking in the background somewhere.

Can you talk about the scary Mr. Bunting?

Mr. Bunting is the villain of the piece. If you’ve read the book, you know exactly as much as I do about him. There’s a mystery to his origin….He’s a legendary figure—rumoured, like an urban legend. But no one really believes he’s real. What’s unclear to me is just how evil he is. He’s not actually doing anyone real any harm. He only eats imaginary people, who (by definition) are imaginary. And he only does it out of love, because he wants to go on believing in his own imaginary friend. Isn’t that a good thing? My sense is that, were I to write a prequel (in a George Lucas way), it would turn out to be Mr. Bunting’s origin story—in the way that the whole of Star Wars turned out to be Darth Vader’s story.…But I’m not going to write that. I’ll leave it up to George.

What was it like for you to see Emily's illustrations for your story?

It was a real delight to see the first sketches and samples Emily did when she’d first read the story. What so excited me and my editor, Kate Paice, was that it was very clear that Emily got it. She understood the book. We had lunch at the very beginning of the process, and then she just got on with it. Every now and then, someone would send me a picture and I’d say, “gosh.” And, because this sort of illustration job of this sort of novel was a new thing for Emily, it meant she was experimenting and finding her way too, which I think pays dividends in the final book. It’s not the work of someone going through the motions, however lovely those motions and their results are. It’s someone thinking with her pen.

How does your poetry writing affect your prose, if at all?

I think poetry and writing for children have something in common, which I think of as ‘get on with it.’ Children’s stories that are full of waffle and verbiage are boring. We want the story to kick off as quickly as we can and to tell us only what we need and to roll downhill like a snowball until the end. And poetry is similar: It’s all about cutting and cutting until all you have left are the handful of words that do the job.

As I was writing The Imaginary, my poetry collection called The Point of Inconvenience was published by Two Rivers Press. That was an adult collection, a sequence of poems about becoming an orphan, about my mother’s cancer and death and so on. And it was only as I wrote the last chapter of The Imaginary that I suddenly realised what it had all been about—for me. And, as I wrote the words ‘The end’ at the bottom of the final page, I skipped back to the beginning and added the Christina Rossetti poem [which opens The Imaginary]. My mum had had me read it at my dad’s funeral and had then wanted it read at hers. And I simply hadn’t known, as I was writing it, that it was a book about forgetting and remembering and loss in quite that way. It was another attempt to say something about becoming an orphan, but obliquely. That was a surprise.

It was such a departure from the Fizzlebert Stump series, which are straight comedies—silly, funny, and with an annoying narrator who keeps getting in the way, a bit Snicketty-ish. So I was a little anxious handing it in. Bloomsbury bought me to be funny, and I’ve made a book that isn’t. They would’ve been within their rights to turn around and say, “It’s not quite what we wanted.” But, fortunately, they didn’t.