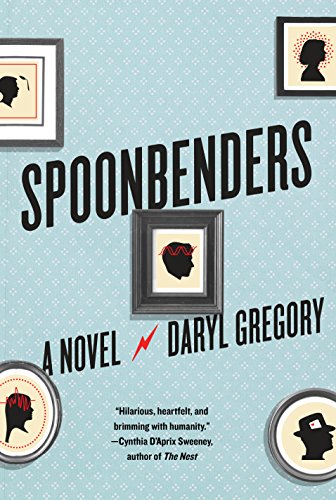 Ah, the call of summer. A time of beaches, vacations, and good old-fashioned relaxing. For readers, summer is the start of Serious Reading Season. If you're looking for a good summer read, start with one of these science fiction and fantasy titles, which include weird western adventure, a family with psychic abilities, a creepy and surreal carnival, a shadowy government organization tasked with resurrecting magic, and the glorious return to a thirty-year-old epic fantasy...

The Queen of Swords by R.S. Belcher

If you've never experienced a weird western, R.S. Belcher's Golgotha series is a great place to start. The series revolves around the strange goings-on in a small

frontier town in Nevada in the late nineteenth century. The latest entry, The Queen of Swords, focuses on Maude, one of its residents.  Maude is hiding two secrets: she belongs to an ancient order of assassins called Daughters of Lilith, and she's the descendant the legendary pirate Anne Bonney. When Maude goes looking for her missing daughter, she finds herself caught between an age-old rivalry between her assassin sisters and their mortal enemies…both of whom are seeking out Maude's daughter because of her prophetic gifts.

In Cooper's imaginative near-future world, most people live in the megacity of Seacouver, where every need is met. Still, some leave the city to work on a rewilding crew, restoring to a more natural state lands that were driven to the brink of ecological disaster by humans. Coryn is an orphan whose sister, Lou, left the city to do just that, so she takes a companion robot to go look for her. However, the lands outside the city are not safe. Some people who resent the city seek and wish to destroy it. While looking for her sister, Coryn encounters people with a sinister agenda that may endanger Seacouver.

Teddy Telemachus is a talented con man who tricks his way into a government study on psychic abilities. There, he meets and falls in love with Maureen McKinnon, a genuine psychic. They have three kids who each possess extraordinary abilities: Irene is a human lie detector; Frankie can move objects with his mind; and Buddy can see the future. Decades later, life is far from being the proverbial bowl of cherries. Spoonbenders shows what happens when people possessing supernatural gifts still have to deal with the ordinary things that life throws their way.

In this alternate history steampunk fantasy, talented tinkerer/inventor George Dower inherits a small, ticking clockwork box that is somehow linked to the woman who gave it to him on her death bed. When she breathes her last dying breath, the box stops ticking, and George is finally able to open it. Inside he finds hundreds of letters written in an unknown hand and signed with the letter S. The letters present a mystery to George that leads him on a wild adventure.

Soleri launches a brand new epic fantasy series that was inspired by both ancient Egyptian history and King Lear. Within this meticulously detailed setting, the ruling family of the Soleri Empire has been in power for millennia, seemingly descended from the gods. Although they remain unseen by the people, they rule with an iron fist, forcing the will of local kings by taking their heirs hostage. Daring to defy the ruling family is the Harkan king, Arko-Hark Wadi, who sets off on a hunt and shirks his duty rather than bow to the emperor. The pieces are being positioned for an epic battle over control of an ancient empire.

If you like creepy carnival settings, you'll enjoy this new coming-of-age fairy tale. When Andy goes to the carnival, he's as excited as any young boy would be. However, things take a turn for the worse when he visits Burleigh's Amazing Hall of Mirrors and literally walks into one of the mirrors, thus entering a bizarre, dreamlike carnival-like fantasy world where literally anything can happen. Making any chance of rescue even more remote is the fact that, when Andy entered the mirror, a lookalike emerged and took his place in the real world.

In this surreal paranoia-infused novel, an information assistant named Vanja is sent to the wintry colony of Amatka, tasked with collecting intelligence for the government. Vanja immediately notices that something in Amatka is amiss: people act oddly and the citizens are monitored by their leaders for signs of subversion. Vanja falls for her housemate and prolongs her stay thus allowing her to discover evidence of a growing threat to the colony and the corresponding cover-up by its administration. When Vanja seeks answers, she learns that even the very fabric of reality cannot be trusted.

Set in a near-future San Francisco, this speculative thriller involves the science of biohacking...that is, a do-it-yourself biology movement concerned with biological experimentation and modification. In Shattered Minds, Carina used to be one of the best biohackers in the business until she realized what the company's experiments were doing to their subjects. After she quits, she becomes addicted to the drug Zeal and immerses herself in a fantasy world where she acts out her most depraved fantasies. When Carina witnesses scenes of a brutal murder on one of those fantasy trips, she realizes they were implanted by her former co-worker, who was leaving clues to his own real-world murder.

What is an Army veteran to do when the development of robotic helicopters makes her job obsolete? For True Brighton, it means getting a job at a private military company called Requisite Operations which was established by a friend and former Special Ops soldier. Now working as a veteran warfighter for hire, True undertakes missions where she can use her military skills. But a seemingly routine mission accidentally uncovers an even bigger discovery – one linked to True's past – and True is determined get to the bottom of it, regardless of the danger.

The Rise and Fall of D.O.D.O. by Neal Stephenson & Nicole Galland

Melisande Stokes is an expert in linguistics and languages at Harvard University. After she meets Tristan, a military intelligence operator from a shadowy government entity, he makes her a tempting offer involving a large sum of money on the condition that she signs a nondisclosure agreement. Melisande is asked to translate ancient documents that prove the existence of magic. Not only did magic exist, it was practiced for centuries but dwindled after the age of scientific discovery. With Mel's help, the Department of Diachronic Operations (D.O.D.O.) will accomplish their true mission: to bring magic back into the world.

In this book of linked illustrated short stories, Valente takes aim at the portrayal of women in superhero comics. It follows the lives of six female superheroes and the girlfriends of superheroes…women who became victims just so the story lines of male superheros could progress. Each of the six stories are accompanied by illustrations from Annie Wu.

The Witchwood Crown by Tad Williams

Nearly thirty years ago, Tad Williams introduced epic fantasy readers to the land of Osten Ard in The Dragonbone Chair, the start of the Memory, Sorrow, and Thorn trilogy. Williams returns to that much-loved world with The Witchwood Crown, the start of a brand-new sequel trilogy. Here, decades later, Osten Ard is once again at a crossroads. The realm is threatened by division as old allies are led down dark paths. Even more troubling: the Norns, the elvish foe vanquished long ago, are once again gathering their forces, preparing to reclaim the mortal-ruled land that was once theirs.

Squeeze in even more summer reading time with smaller, but equally appetizing, stories of the fantastic. Here are the new short fiction anthologies to check out this month...