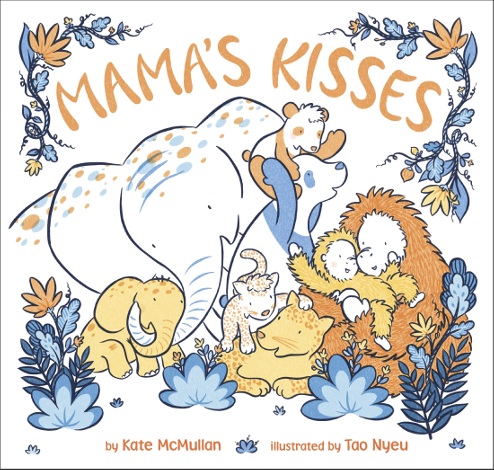 Last week, I wrote here at Kirkus about picture books that reflect the lives of children living in poverty. There’s really no segue from that to a picture book round-up, which is what I have this week – especially when the three books don’t really have a common theme, except that they’re all excellent choices for the youngest of readers. Or, say, preschool-aged listeners sitting in your lap, eager for a good story. They are stories of bedtime and lullabies; science and shapes, told with a poet’s touch; and death and loss, followed by happiness found.

Let’s start with the bedtime book, Kate McMullan’s Mama’s Kisses, illustrated by Tao Nyeu. How, you may be wondering, can anyone make a bedtime book stand out anymore? There are precisely eleventy hundred million of them. While McMullan’s rhyming text is soothing in all the right ways and rolls right off one’s tongue, it’s Nyeu’s illustrations that really make this one sing. Rendered via ink, colored pencils, and Photoshop with primarily cool blues and mustards and a host of fluid, curving lines, Nyeu keeps the spreads busy and playful – but never cluttered.

The story takes place in the rainforest and features a group of small creatures who hide from their mothers at bedtime. They’re ready to sing lullabies to them, but readers spot in the first spread the small ones sneaking away and climbing a tree. Their mothers stomp by as they hide in the brush; call for them as they disguise themselves on tree branches; and eventually reveal them hiding under a blanket. The small ones get tremendous glee out of having tricked their parents, just as human small ones do. Both author and illustrator build the tension well and dedicate four spreads to the tucking-in of each creature – a leopard, a bear cub, an elephant, and an orangutan. On the final spread, they’ve all succumbed to sleep, and the final endpapers show the passed-out parents as well.

Sweet and reassuring, as bedtime books aim to be, this is one to read slowly and linger over but for the beautiful art alone. Nyeu is an illustrator whose work I always look forward to, and her art reminds me every time of the notion that a picture book is a child’s portable art gallery. Give your child a break from screens, and show them the world of Nyeu’s one-of-a-kind imagination. And if it’s right before bed, where the doors to their dreamscapes are creeping open, even better.

Nyeu knows that to fill a bedtime book for young children with comforting, round lines is wise. Joyce Sidman also has an appreciation for all things round. In her newest book, Round, illustrated by Taeeun Yoo, Sidman offers up a poetic tribute to the world’s roundness in nature, as we see a young girl explore the outdoors and observe the very nature and qualities of circle shapes on this planet. Fruit, eggs waiting to hatch, sunflowers bending toward the sun, things that start out a bit more ragged and then are worn into round, the efficient movement of round things, how water can be round – all of this, plus some, is explored here. (How can friends be round “with no one left out”? Sidman’s got you covered.)

Her writing is direct and accessible: “They are so good at it,” she writes about the easy movement of round things. In one spread, she describes things that “pop up quickly…and last only a moment.” Here, Yoo shows the girl blowing bubbles. It’s birth, fleeting life, and death all in one enchanting, rust-colored illustration. In another spread and vivid moment of personification, the moon shines bright while “the whole sky holds it breath.” In a closing note, Sidman states that she loves round things for their snugness, their interconnectedness, their symmetry, their cosmic qualities; indeed, the story ends with the young girl hugging a parent, the best possible kind of circle. “[Round things] bring us back to where we started,” she writes. Simple yet profound. And Yoo’s mixed media illustrations are soft and warm. This is a must-have for preschool and kindergarten classrooms and libraries.

I’m saving my very favorite for last, Elisha Cooper’s Big Cat, Little Cat, which is a story of loss and grief but, ultimately, closure – or at least the hope of new beginnings. This is the story of a domesticated white cat, who lives alone, loved by a family, until the day they add a new kitten to the mix. They grow together until the new black cat is eventually bigger than the one who came before him. When the old white cat dies, the black cat is alone, bringing this story full-circle. “And that was hard,” Cooper writes. “For everyone.” But one day another kitten arrives (white, of course), and the black cat is given an opportunity to return the same favor afforded to him by the white cat who once took him under his wing. We see them snuggling together on the final spread: “Big cat, little cat.”

Cooper eschews his signature watercolors here for loose, uncluttered drawings with thick lines – all on lots of white space, giving this story an openness and looseness fitting to the subject matter. (We want our books about death and loss to breathe a bit, yes?) It’s remarkable how well he captures the essence of a cat with something like five wriggly thick black lines, and clearly he’s lived with a number of cats (though the book’s dedication, what appears to be a long list of pretty wonderful cat names, proves that). He captures their personalities accurately: in describing how the older white cat and younger black cat spend their days, he writes at one point, “For five minutes each day they went wild.” The man knows house cats.

The death is handled delicately but not in a way patronizing to children. “[T]he older cat got older and one day he had to go,” Cooper writes, “and he didn’t come back.” The next spread is a moment of exquisite economy, predominantly white space with the black cat on the far right of the recto page. We see him from behind. He’s encased in a sort of pale-brown watercolor bubble, the only one that appears in the book (though the endpapers mirror this with circles), as if he’s literally encased in his own grief.

It all adds up to a touching, but never cloying, story of family, loss, and love. And cats. Wonderful, capricious cats. Meow.

Happy reading to all …