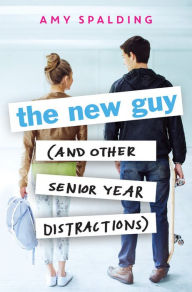 Last year, I wrote about my decision to give myself a Valentine: pre-ordering a whole slew of upcoming romances. I enjoyed myself so entirely—for months, books just APPEARED in my mailbox, it was like MAGIC—that I’ve decided to make it a personal tradition. But I’ve also decided to give it a tweak: rather than ordering purely upcoming books, I’m going to buy some backlist titles, too!

Currently in my shopping cart:

The New Guy (and Other Senior Year Distractions), by Amy Spalding

I loved Spalding’s Kissing Ted Callahan (and Other Guys) for being smart and funny and light-but-still-substantial and for being just as much a friendship story as it was a romance—and I loved it even more for how she wrote against stereotype in allowing her male lead to be a romantic and her female lead to be more driven by her libido. The Kirkus reviewer had concerns about the lack of actual kissing in this new book, but based on my affection for Kissing Ted Callahan, I’m hoping that it’ll be a better fit for me!

A Fierce and Subtle Po

Set in Puerto Rico and drawing on Caribbean folklore, this one starts out with a boy who finds himself the prime suspect in a murder investigation, but then switches gears into a more fantastical storyline—one that involves a girl who’s so poisonous that she might be deadly. This one’s had a lot of praise for being super atmospheric, and I’m always up for that.

Places No One Knows, by Brenna Yovanoff

A girl who seemingly has it all, a boy who is a complete disaster. That sounds like a story we’ve all seen before, but based on her previous books, I have complete confidence that Yovanoff will do something entirely original with it. Actually, while I’m at it, I’ll go ahead and order her Fiendish, too, since I haven’t gotten to it yet!

If I Was Your Girl, by Meredith Russo

I’ve actually already read this one, but it is so absolutely lovely that I want to—no, MUST—own a nice hardcover copy of it. Amanda Hardy is the new girl in school, and despite her desire to fly under the radar, one of the most popular boys in school notices her…and the more she gets to know him, the more she wants to know him. People in Amanda’s past, though, knew her as Andrew, and as much as she’d like to share her entire journey and self with Grant, she knows that her personal truth could put her actual safety in jeopardy. IF YOU HAVEN’T ALREADY, PRE-ORDER THIS BOOK. So, so good. I can’t wa

it to get a physical copy so that I can hug it.

All Our Pretty Songs, Dirty Wings, and About a Girl, by Sarah McCarry

The Metamorphosis Trilogy has been on my TBR list for FAR TOO LONG. Everything I’ve heard about these three books suggests I will love them, and I can’t think of a single other series that has earned a Kirkus star for every installment. (For real, how impressive is that?) They’re all praised for their atmosphere and their complex, rich relationships; the diversity of the characters and the originality of the storylines; and for the writing, the writing, the writing.

That’s where I’m at SO FAR. Feel free to recommend more, I’m in SPENDING MODE.