Veum Service: The Last Search for a Long-Missing Miss 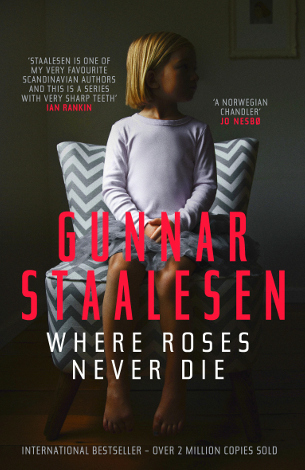 I have a small bone to pick with Scandinavian fictionist Jo Nesbø. On at least one occasion, Nesbø—author of the Inspector Harry Hole series (Police), in addition to such acclaimed standalones as 2014’s The Son—has referred to his elder fellow Norwegian crime writer, Gunnar Staalesen, as “a sort of Norwegian Chandler.” Such hyperbole is common currency among writers and book critics (hasn’t Nesbø himself long borne the sobriquet, “the next Stieg Larsson”?); and publishers of English-language translations of Staalesen’s private-eye yarns have now taken to plastering Nesbø’s “Norwegian Chandler” exaggeration on the covers of his books. However, the label’s ubiquity does not enhance its veracity.

Raymond Chandler was, as we all know, a father of American detective fiction. That 20th-century oil company exec turned writer penned tough-edged tales, sometimes light on originality and rife with loose ends, but abundant in wisecracks, similes, and musings of a memorable, literary sort—quotes that subsequent scribblers would gleefully have stolen by their roots, if they could’ve gotten away with such acts. “From 30 feet away she looked like a lot of class. From 10 feet away she looked like something made up to be seen from 30 feet away,” Chandler observed in his 1942 Philip Marlowe novel, The High Window. In The Big Sleep (1939), gumshoe Marlowe remarked: “I needed a drink, I needed a lot of life insurance, I needed a vacation, I needed a home in the country. What I had was a coat, a hat and a gun. I put them on and went out of the room.” And, going back a bit further, in his 1938 short story “Red Wind,” Chandler captured southern California’s muscular, dry Santa Ana winds this way:

There was a desert wind blowing that night. It was one of those hot dry Santa Anas that come down through the mountain passes and curl your hair and make your nerves jump and your skin itch. On nights like that every booze party ends in a fight. Meek little wives feel the edge of the carving knife and study their husbands’ necks. Anything can happen. You can even get a full glass of beer at a cocktail lounge.

Staalesen’s descriptions are not nearly so inventive or eloquent. For instance, in Where Roses Never Die—a novel released in his home country four years ago as Der hvor roser aldri dør, but only made available this season in an English translation (by Don Bartlett)—he has this to say about the environs of Bergen, Norway’s second-largest city (after the capital of Oslo), located on the nation’s west coast:

The sun was going down when I parked outside Solstølen Co-op that Saturday evening a week before Palm Sunday. The red of the sunset between the scattered clouds lay like an open wound over the mountains on Sotra, with Mount Lyderhorn to the north-west like a tusk.

Nobody’s likely to confuse Staalesen’s more straightforward prose with Chandler’s, and to suggest otherwise underestimates the perspicacity of readers, at the same time as it does a disservice to the 68-year-old Norwegian wordsmith himself. Staalesen, who debuted as a fiction writer in 1969 with Seasons of Innocence, counts among his credits 16 novels starring Varg Veum, a onetime child welfare worker and divorced father who’s become a private investigator in Bergen. Just half a dozen of those works are currently marketed in English, including The Writing on the Wall (2004) and The Consorts of Death (2009), the latter of which the author lists among his favorites. Although Staalesen acknowledges Chandler’s influence on his own storytelling (and, indeed, his man Veum and Marlowe share tippling proclivities, though Veum’s drink of choice is aquavit, rather than whiskey or gimlets), it’s really to a different California PI-fiction star that he owes the greater debt: Ross Macdonald. In Where Roses Never Die the protagonist says he’s a “fifty-nine-year-old private investigator, of the so-called hard-boiled variety.” Yet the lone-wolf, world-weary Veum boasts of the same compassion for people in trouble that Macdonald’s Lew Archer always exhibited, empathy that drives his investigations forward, even when the odds of success appear low, and that aids in his struggle to glean information from clients and suspects alike.

Where Roses Never Die opens with the robbery, in late 2001, of a Bergen jewelry shop, during which “three heavily armed individuals” in ski masks—one of them, perhaps, a woman—empty out the display cases, a safe, and the store’s cash reserves before fleeing. On the sidewalk outside, those thieves collide with a pedestrian, and after exchanging a few words unheard by others, shoot that man before escaping in a boat docked at the adjacent harbor.

Not long after this incident, a woman named Maja Misvær comes to see shamus Veum at his shabby little office, asking him to reinvestigate the 1977 disappearance of her then 3-year-old daughter, Mette, before the 25-year statute of limitations on her case ends. It seems Mette went missing while playing in a sandpit beside her suburban home, and despite a no-stones-unturned police probe, evidence of who abducted her or where she might have gone was never found. Maja wants to know, once and for all, what happened to her little girl—and whether she’s dead or still alive. Things have not been going well for our hero lately. Veum’s longtime girlfriend, Karin Bjørge, perished three years ago (under circumstances related in 2015’s We Shall Inherit the Wind), and his business hasn’t exactly been brisk of late. “The only thing that kept me going,” he explains, “was the consolation I found in all the bottles I stumbled over.” So he takes on this very cold case in hopes of it giving fresh purpose and direction to his life.

New avenues of inquiry look to be non-existent. Yet one cop who worked the original investigation, a woman specializing in sexual offenses, suggests to Veum that “there was something out of kilter” about the compact, five-house community from which Mette vanished, Solstølen Co-op. As Veum digs into the long-ago crime at the heart of this slow-boiling story, he comes to share her misgivings. Most of the couples who lived at Solstølen in 1977 have since divorced, and all of the current and prior tenants lean rather heavily toward the eccentric, including the pompous architect and his actress ex-wife, the teacher and her naval base worker husband, and even Maja Misvær, for whom time all but stopped a quarter-century ago. No less unusual is Jesper Janevik, a supposed pedophile who in the late ’70s had “come under suspicion for indecent exposure,” and had visited the co-op to see some relatives there. When Veum is tipped to sexual shenanigans at the co-op shortly before Mette’s loss, and learns that the passerby who was murdered during Bergen’s recent jewelry store robbery also happened to have once been a Solstølen resident, he thinks he might finally have found the threads that will lead to the Mette mystery’s unraveling. He’s sure he is on to something, when two bruisers in a dark-gray Audi—the colorfully nicknamed Flash Gordon and Thor the Hammer—start dogging his steps around town.

Where Roses Never Die is somewhat lighter in tone than previous installments in Staalesen’s series. It even hints that Varg Veum’s lengthy romantic dry spell might be coming to an end. (We’ll have to wait until the English-language release next year of its sequel, No One Is Safe in Danger, to know more.) The strengths of the Veum yarns are all in evidence in these pages, though. The PI’s persistence in pursuit of answers is carefully orchestrated; you can understand why some of the folks he questions over and over again might like to punch him in the mouth to get him off their backs. The author also does a superior job of building suspense in regards to both the kidnapping and robbery cases, stitching clues into his plot that leave one wondering about the crimes’ connections. His portrayals of the players involved in these puzzles benefit from multiple, gradually unfolding dimensions. And though there are moments of pulpish action here that feel a tad contrived, offered merely to accelerate the story’s pace (as if Staalesen has internalized Chandler’s kidding advice to mystery writers, “When in doubt have a man come through a door with a gun in his hand”), they don’t seriously undermine the author’s continuing explorations of his protagonist’s sensitivities and self-doubts. Nor do they distract from his efforts to understand the crippling psychological wounds a mother might endure after the disappearance of her child—a crime that Staalesen says is based on a couple of real Norwegian abductions.

No, Jo Nesbø, Gunnar Staalesen is not Raymond Chandler. His stories, while not perfect, can stand quite firmly on their own merits, thank you.