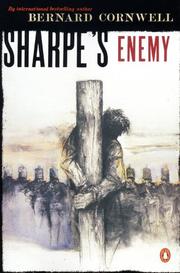 Who is Sharpe's enemy? That's one of the twists in this fifth Peninsular War maneuver for soldier-hero Richard Sharpe: another jaunty blend of cannons, derring-do, and personality. It's now December 1812--and a Portuguese village has been raped and massacred by a vile, red-coated mini-army of British and French deserters. (Bad PR for the British.) Furthermore, this brigade--led by a former French cook and Sharpe's old nemesis Hakeswill--has seized control of a castle/convent complex on the Portuguese border, taking several multinational hostages. . . including the Spanish bride of Colonel Sir Augustus Farthingdale. So who will rescue them? Sharpe, of course (now a Major!), since he happens to be in nearby Spain, testing some experimental military-rockets for General Nairn. His initial Anglo-French attempt to ransom the hostages fails. Then Sharpe leads a special troop (including the Royal American Rifles) to an assault on the castle--first rescuing the hostages (Lady Farthingdale turns out to be Sharpe's old flame, whore Josefina!), then battling the brigands for control of the whole area. But, though there's been an Anglo-French truce during this anti-terrorist action, Sharpe is now suspicious of his temporary "allies"; buffoonish Lord Farthingdale, however, insists on maintaining the truce. Thus, Sharpe must eventually blackmail Farthingdale (the Josefina secret) into turning over command: Sharpe can then defend the crucially located castle from a huge French invasion. (His last-ditch secret weapon? Those above-mentioned rockets, naturally.) And the final fray brings victory, the long-delayed demise of unkillable Hakeswill. . . and tragedy too, alas: Sharpe's wife Teresa, a Spanish partisan-leader, will be one of the unintended fatalities. Some anachronistic repartee, some excessively grisly torture--but, as before, Cornwell manages to add spice and tension to the more standard barrage of tactics, musketry, and explosions.
Pub Date: March 1st, 1983
ISBN: 0140294341
Page count: 247pp
Publisher: Viking
Review Posted Online: March 24th, 2012
Kirkus Reviews Issue: March 1st, 1983

WAR OF THE WOLF
by Bernard Cornwell
Fiction

WARRIORS OF THE STORM
by Bernard Cornwell
Nonfiction