Astounding Facts About the Early Days of Science Fiction 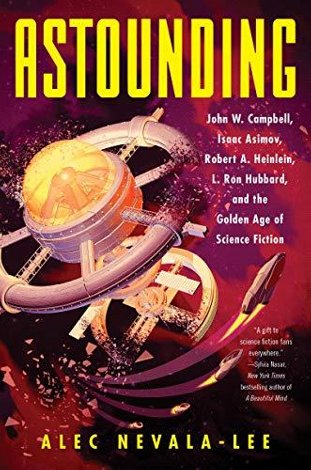 Historically speaking, the road to modern science fiction began at the editorial desk of John W. Campbell. Campbell was the editor of Astounding Magazine during its heyday and ushered in the so-called Golden Age of Science Fiction (roughly 1939 – 1950). Motivated by his desire to present scientifically accurate sf with believable characters, Campbell shaped the creative output of many science fiction writers which would, in turn, shape the field for decades to come. If literature is an ongoing dialogue, then Campbell was the one who started the conversation.

Campbell's life is discussed in a new, illuminating biography by Alec Nevala-Lee titled Astounding: John W. Campbell, Isaac Asimov, Robert A. Heinlein, L. Ron Hubbard, and the Golden Age of Science Fiction. The long title hints at the bigger-than-one-person focus of modern science fiction's true beginnings. Campbell's relationships with a close circle of friends—specifically, noted authors Isaac Asimov, Robert A. Heinlein, and L. Ron Hubbard—offer a peek into the early days of science fiction publishing. Short fiction's booming market was where many writers emerged from obscurity into fame. Campbell himself started out as a writer before he was handed the reigns of the popular science fiction magazine Astounding. The professional relationships he forged with Asimov, Heinlein and Hubbard serve as the foundation on which Lee portrays the younger days of sf. Lee provides biographical backgrounds for all the major players along the way. He also frames events in their historical context (like World War II) to examine their impact. Lee backs up his facts with hundreds of citations proving he has thoroughly researched the topic. Even better: he lays out those facts in a way that is interesting, relatable and easily consumed.

On some level, Astounding is portraying the lives of people who were far from perfect. Nevala-Lee deftly avoids the trap of equating influential figures with exemplary character. Campbell's reign of power, for example, occurred at a time when science fiction was predominantly written by white men. Lee doesn't shy away from the fact that the history of science fiction—a literature that Campbell himself sought to usher into a future incapable of escaping the rapid advances of technology—is less than enlightened. He says that Campbell bears some of the blame for limiting science fiction's diversity during those years, the lasting effects of which are still discussed today. Campbell's notoriously racist views and editorial decisions are covered here as well. While he remained an influential figure in the field, his desire to shape psychology and history into an exact science eventually led to his inevitable decline and, ironically, his rebuke of science itself. Campbell was flawed and Lee lets us know how.

Astounding is a captivating read for many reasons: it's a fascinating historical record of science fiction's early days; it offers interesting portraits of science fiction luminaries; it covers tons of short fiction stories and their plots; and it is all laid out in brutally honest detail that's quick to read. It's also liberally peppered with a treasure trove of trivia that even this science fiction fan didn't know. For example:

There are many more interesting tidbits to be found in Nevala-Lee's comprehensive biography of the creators of modern science fiction. The fun is in discovering them.