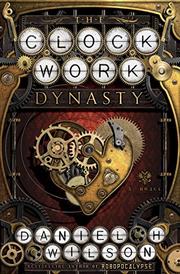 The final month of Summer reading season is upon us but that doesn't mean there aren't new and awesome stories to be read. Here's a roundup of the speculative fiction books that you should be looking at in August. They include stories about a magic-infused alternate history, witches in the Old West, a journey beyond Earth's solar system undertaken by clones, and a dating app that wants to take over the world…

The Massacre of Mankind by Stephen Baxter

The War of the Worlds by H.G. Wells, a story of how the Martians came to earth and laid the smackdown on humanity with their tripods and death rays, is an undisputable classic of science fiction. In this new gripping sequel, fourteen years have elapsed and, thanks to the ships left behind by the defeated aliens, technology on Earth has taken huge leaps forward. And so mankind, wary of another attack but complacent in their readiness to defeat the Martians again, are not too worried when the detect another launch from the red planet. But this time, the Martians are prepared. They've learned, too, and they are not planning on making the same mistake twice. Baxter is no stranger to H.G. Wells; in 1995 he wrote a spectacular sequel to Wells' The Time Machine that perfectly captured the story's original voice and tone. Expect more of the same here.

Call of Fire by Beth Cato

Call of Fire,a book that the author herself describes as a fun combination of Star Wars and Final Fantasy, takes place in an alternate 1906 where the United States and Japan aim to dominate the world through a powerful joint confederation called the Unified Pacific. In their arsenal of weapons is a resourceful young heroine with magical powers. Ingrid Carmichael is a geomancer, a novice magic wielder whose power is drawn from the Earth, and the last thing she wants is to be used by power-hungry bureaucrats. Ingrid and her friends flee San Francisco to escape them, but when some of those friends are kidnapped, she reluctantly teams up with Unified Pacific ambassador Teddy Roosevelt to find them, and unknowingly heads towards a cataclysm in Seattle's Mount Rainier for which she might be the trigger.

Who doesn't love a good revenge story?  Devil's Call not only serves up a good one, but sets it in mid-19th century America and adds a dash of the occult. In 1859, Dr. Matthew Callahan is shot and killed by three men who enter his home. His pregnant wife, Li Lian, witnesses (and survives) this horrific act of violence. But here's the thing: Li Lian is part of the MacPherson clan, a group of women gifted in the ways of witchcraft. Vengeance consumes her and, with rifle and witchcraft at the ready, she travels across the Great Plains to give the murderers what's coming to them. Written as a story that a mother tells to her child, Devil's Call is being described as "The Revenant with witches."

The Grip of It by Jac Jemc

In this literary horror novel, a young couple, Julie and James, try to get a fresh start when they settle into a new home in a small town near where they met. The house, which is situated between a lake and a forest, has other plans. It becomes the source of increasingly bizarre occurrences: the already-claustrophobic architecture becomes unrecognizable as they find rooms within rooms they never knew existed, and maybe haven't before; stains on the walls animate and become echoed on Julie's skin; and mold spores taint the water. Together, Julie and James become determined to find the source of the weird goings-on, a strange trip in which they learn about their also-strange neighbors and the house's former occupants.

The Stone Sky by N.K. Jemisin

The is the conclusion to Jemisin's award-winning Broken Earth series, which is about a tectonically volatile planet that can only be controlled by the despised and feared orogene people who have the ability to control energy.  The fate of the planet's single land mass, the supercontinent called the Stillness, may rest in the hands of two women: Essen and her estranged daughter Nassun. Essen is still searching for her daughter, hopeful that they can mend the world and make it safe for everyone. Nassun is more jaded and thinks that maybe some – especially not those that hold the orogene in contempt – are not worth saving.

In this epic sequel to the critically acclaimed Cold Iron, the magical Kingdom of Eledore has fallen at the hands of its enemies, the Acrasians. The Acrasians fear magic, so they massacred nearly all of the people in the kingdom and wiped them from the face of the world. However, it was that very same magic that was keeping hordes of demon forces at bay. Now the great evil that plagued the world is once again seeping back in, and little can be done to stop it. Twins Nel and Suvi are doing their part, anyway. Nel leads a small group of survivors through the wilds to establish a new home for his people, safe from both invaders and demons. Meanwhile, his sister Suvi heads seaward, seeking allies.

Lostetter's ambitious debut, told in a series of vignettes, is a sweeping epic of mankind's journey beyond Earth's solar system. In 2088, astrophysicist Reggie Straifer discovers an anomalous star that is either the first of its kind discovered in the universe, or entirely artificial. Either one warrants a mission to discover what's going on, but the journey will take generations of crew to complete. The solution to maintaining the genetic talent of the original crew is to use cloning technology to keep populating the ships. At any given time, there are two clones of each crew member, where the older clone teaches the younger version. Thus, the journey is made as the eons pass, with a regenerated crew of clones to undertake the mission. But a clone is not a perfect copy. Across many generations, the society aboard the ships evolves, thus changing the state and chances of the mission.

In the early twentieth century, in a remote valley in the Bavarian Alps, society is plagued by two things. First is the eugenics movement; people are seeking to perfect the human race through breeding and culls. Second is the Juke, a parasitic species that lives off the hopes, dreams and faith of humanity as it consumes them from within. Years later, Dr. Andrew Waggoner tries to unravel the mystery behind the Juke while Jason Thistledown becomes a veteran pilot of World War I about to embark on a new career carrying mail and passengers by plane in Africa. However, neither of them can escape the horrors of the past.

The Dark Net by Benjamin Percy

You've heard of the Dark Net, yes? This is the unpublicized corners of the Internet where people often engage in criminal activities. Now ask yourself: what if something else was hiding there? Something ancient and evil? That's the premise behind Percy's new techno-horror thriller. Set in present-day Portland, a ragtag team of unlikely misfits comes together to battle the powerful and otherworldly darkness. The group includes a twelve-year-old girl who uses a visual prosthetic to combat her blindness, a technophobic journalist, a one-time child evangelist who suffers from personal and literal demons, and a hacker with a cause.

After On by Rob Reid

If you're wondering with more than a little concern where the future of social networks is going, Rob Reid is way ahead of you. In his near future, the prevailing dating app network is Phluttr. It wasn't planned, but Phluttr has achieved a mind of her own. The problem is she's an adolescent artificial intelligence that knows more about you than you're willing to admit. Her untapped power is unrivaled, but not outside the realm of control for a select few Silicon Valley entrepreneurs, venture capitalists, and engineers, who come together to stop Phluttr from literally ruining the world. Reid, who has a firm grasp of technology and trends, spins a satirical cyberthriller that's worth checking out.

Past and present collide in Wilson's alternating narrative. The Clockwork Dynasty introduces readers to a secret history of the world we know. In the present day, anthropologist June Stefanov uncovers a terrible secret in the inner working of a three-hundred-year-old mechanical doll. What she learns throws her into a secret hidden world populated by human-like machines that have existed alongside humanity for centuries. Flashback to the Kremlin in 1725 Russia, where the tsar's loyal mechanician brings to life Peter and Elena, two surprisingly humanlike mechanical beings who are pulled into a legendary war that has been waged for centuries.

Do you read short fiction? Here are some awesome short fiction collections and anthologies that await you, hungry reader!

John DeNardo is the founding editor of  SF Signal, a Hugo Award-winning science fiction and fantasy blog featuring news, reviews and interviews. You can follow him on Twitter as @sfsignal.
MORE FEATURES
POPULAR KIRKUS STARS