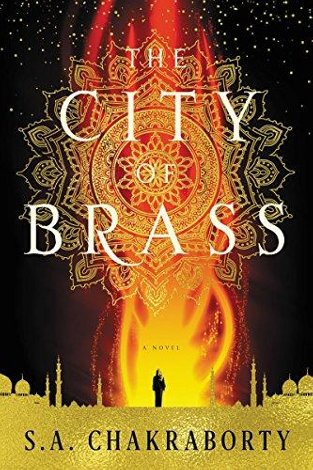 This month's picks for the best science fiction, fantasy, and horror reads include magical mobsters, deadly mermaids, mankind's devolution into monkeys, and a moon heist.

Do you want to get in on the ground floor of a stylish new military science fiction series? Then check out Valiant Dust by Richard Baaker, the first book of the Breaker of Empires series. The novel's hero is Sikander Singh North, a Kashmiri gunnery officer who's just joined the crew of the Aquilan Commonwealth starship CSS Hector. Sikander will have plenty of chances to prove his mettle when the Hector is called in to help deter the rebels of a planetary uprising. Sound like your cup of tea? Baker's military background only serves to raise this adventure above the rest.

The City of Brass by S. A. Chakraborty

Speaking of whiz-bang starts, The City of Brass—the debut novel that starts the The Daevabad Trilogy—drops readers into a richly imagined and credible Middle Eastern kingdom. Nahri is a con-artist bilking money out of noblemen on the streets of eighteenth-century Cairo by pretending to possess clairvoyant and healing abilities. Then she accidentally summons a real djinn warrior who tells her that she is linked with the distant city of Daevabad, whose impenetrable brass walls hide magical secrets within. Drawn to the city, Nahri learns of her connection with the city while becoming enmeshed in sticky web of court politics.

Future Home of the Living God by Louise Erdrich

Louise Erdich portrays a unique kind of dystopia of in her new novel, where evolution takes a 180° turn and newborn infants appear to be a primitive species of humans.  As people panic, society destabilizes and leans towards martial law meant to track and confine pregnant women. Cedar Hawk Songmaker is scared; she's four months pregnant and sees civilization disintegrating around her.  Cedar, an adoptee, tries to find her birth parents to understand her heritage before the biological apocalypse catches up with her and the rest of humanity.

Into the Drowning Deep by Mira Grant

Like authors often do, Into the Drowning Deep is an expansion of Mira Grant's 2015 novella Rolling in the Deep, in which a film crew went out to the Mariana Trench on the Atargatis to film a mockumentary about mermaids. They expected to record the usual unverifiable eyewitness accounts. What they found were mermaids…with very sharp teeth. The voyage of Atargatis became an urban legend to some, to others it became a way to validate their life's work or the greatest prey of all. To ambitious young scientist Victoria Stewart, whose sister was lost on the Atargatis, it's a not-so-simple matter of finding out the truth.

This debut novel of magic and love revolves around Weylyn Grey, whose inexplicable magical powers have touched the lives of everyone he ever met. Even as a youth, Weylyn knew he wasn't like everyone else. It wasn't just that he was orphaned and raised by wolves, it's the strange things that happen around him, like how he single-handedly stopped a tornado from decimating part of Oklahoma, or how trees grow overnight. Weylyn's life is recounted through the eyes of the people that met him, each one with a story to tell, offering another piece of the puzzle. The only thing Weylyn's life is missing is his one true love, who he saved from a wolf when she was twelve.

What do you get when you set The Godfather in an Asia-inspired city and add some magic and kung fu? You get Jade City, set on the island of Kekon, where Jade is the lifeblood of society, a precious commodity that that is mined, traded, stolen, and a motivation for murder. The Kaul family have used it to enhance their magical abilities while becoming the dominant force on the island. They care about nothing other than protecting their own power and those within their family. But now it's a new generation and when a powerful new drug allows anyone to wield the power of jade, the war between the Kaul family and their rivals explodes into violence.

Winter of Ice and Iron by Rachel Neumeier

In this dark fantasy, the fate of four kingdoms is at risk when war threatens the already-uneasy peace between them.  Kehara Raehema, princess of the most vulnerable of the Four Kingdoms, embarks on a mission to buy some time. Meanwhile Innisth Eanete, Wolf Duke of Pohorir, whose father is perhaps the leading driving force towards war, wishes to unite the people in peace despite his father's plans. Kehera and Innisth soon find themselves drawn together as unintentional allies and the only path towards peace might just be joining forces against a greater evil emanating from spirits inhabit the earth itself.

The Wrong Stars by Tim Pratt

Set in the future, The Wrong Stars is a space adventure about the crew of the ship White Raven. They're a ragtag group of humans and posthumans running freight and salvage on the outer fringes of our solar system. When they find a derelict exploration vessel that's hundreds of years old, the last thing they expect it to contain is a survivor in deep sleep. She wakes up with a dire warning about an alien species that possess advanced technology. Even more urgent: the gifts they bestowed upon her are powerful enough to wipe out humanity.

Oathbringer is the sequel to the soon-to-be-adapted novel The Way of Kings and part of the ever-growing Cosmere universe which collects several series of books.  It's an epic fantasy that sees the return of an old foe as the legendary Voidbringers once again force humanity to face a new desolation. Meanwhile, Dalinar Kholin's holy mission to unite his homeland of Alethkar just got a lot harder to complete.  New secrets about the ancient stronghold of the Knights Radiant – whose mystical swords and suits of armor transform ordinary men into nearly invincible warriors – come to light and now Dalinar must unite all the nations of Roshar.

In this dark fantasy, the first installment of The Great God's War trilogy, the realms of Belleger and Amika have been at war for centuries. Sorcerers from both sides wield against one another the power of the six Decimates: fire, wind, pestilence, earthquake, drought and lightning. Then the sorcerers of Amika learn of a seventh and even more powerful Decimate, one that strips all lesser sorcery of its power. Seeking to also tap into its power, the Bellegerin King sends his eldest son, Prince Bifalt, to seek out the book of the seventh Decimate from a legendary library which may or may not exist. What he finds is that he is an unwitting pawn in an even greater game.

Ironclads are lethal battle suits that make their wearers, the so-called Scions, masters of battle. Unfortunately, one of Scions (a son of one of the great corporate families) must have met with catastrophe, because he's gone missing. Enter Sergeant Ted Regan and his team, who are assigned to find the missing Scion behind enemy lines and discover how an Ironclad, previously thought undefeatable, could be taken down. (If this sounds like your cup of tea, act fast! There are only 1,000 copies of this hardcover novella being published.)

Andy Weir follows up his hugely accessible novel The Martian with a near-future edge-of-your-seat heist novel set on the moon. Artemis is the first and only city on the moon, offering a nice life for rich tourists and eccentric billionaires. But if you’re porter Jazz Bashara, things are bit tougher. That's why Jazz smuggles in a bit of contraband every now and then. Then she sees the opportunity to commit a crime too lucrative to turn away from. The thing is, this particular score puts her smack in the middle for the struggle over control of Artemis itself, and her way out is even risker.

Do you read short fiction? Short fiction is like the candy you eat between meals. Read short fiction between novels, while commuting, or just because. There are plenty of short fiction multi-author anthologies and single-author collections coming out this month. Here are the best picks:

¨  The Overneath by Peter S. Beagle

¨  A War of Gifts: An Ender Battle School Story by Orson Scott Card

¨  Red Dust and Dancing Horses and Other Stories by Beth Cato

¨  Down and Out in Purgatory: The Collected Stories of Tim Powers by Tim Powers

¨  The Experience Arcade and Other Stories by James Van Pelt

¨  The Emerald Circus by Jane Yolen