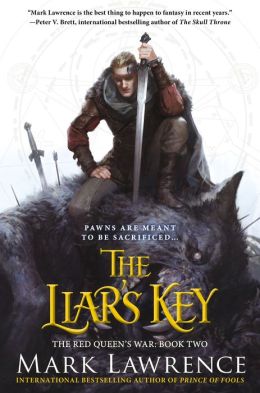 This month's roundup of new, must-read speculative fiction releases includes secret cities, a city of gods and men, exorcism, a genetically engineered human bomb, a reanimated clockwork-enhanced corpse that fights crime, and a real war being fought on reality TV.

A nice selection of books awaits readers of fantasy this month. Mark Lawrence serves up fast-paced adventure with The Liar’s Key, in which a rogue prince seeks to reclaim his decadent lifestyle while a warrior aims to bring his family back from the land of the dead. In Cities & Thrones by Carrie Patel, a struggle for power plays out in a magical, gaslit underground city. Meanwhile, Jo Walton's The Philosopher Kings continues the story of fgods and humans co-existing in a now-fractured city founded by the time-traveling goddess Pallas Athene by people from all eras of human history.

Urban fantasy fans have some good reads in store as well. Readers of the long-running Anita Blake, Vampire Hunter series will be thirsting (see what I did there?) to get the latest installment. In Dead Ice, Anita, a publically sanctioned fighter of the undead, goes after a zombie pornography ring. (You read that right.) And if you like monster-slayers, you could do much worse than Dave Hooper, protagonist of John Birmingham's Dave vs. the Monsters s

eries. Two (count 'em) books in this series hit shelves this month. In Resistance, the smack-taking hero confronts spies and the undead in Las Vegas. In Ascendance, Dave must choose between saving the family or saving the world.

Before we move away from fantasy books altogether, hardcore book lovers will want to know about two more title June has in store, because books themselves play prominently in them. The Library at Mount Char by Scott Hawkins is about a woman looking for her lost father (who just might be God) and must protect the library that holds the secrets to all of creation. In The Book of Speculation by Erika Swyler, an antiquarian bookseller sends the diary of a traveling circus to a young librarian who learns secrets about his family's mysterious history.

Horror fans need not feel left out of tasty selections. Finders Keepers by horror master Stephen King provides a sequel of sorts. Including some of the same characters from last year's Mr. Mercedes, the new novel features a boy who stumbles upon the long-lost unpublished book notes of an author killed by the crazed fan who has recently been released from prison where he was sent after killing that author. Meanwhile, in Little Girls by Ronald Malfi, a woman named Laurie claims the estate from her recently deceased father. But her daughter's new playmate from next door bears an eerie resemblance to the little girl who died next door when Laurie was growing up and living there. Speaking of weird kids, Paul Tremblay's A Head Full of Ghosts features the teenager of a suburban New England family who displays signs of schizophrenia. The parents turn to the Catholic church for help, and they suggest performing an exorcism after determining that their daughter is possessed.

If space travel is more your thing, know that James S.A. Corey's Nemesis Games will be hitting shelves in June. This is the latest installment of the Expanse series (which is coming to television) and it depicts mankind's travels

through the solar system and eventually beyond it. In Nemesis Games, the opening of worlds has disrupted the normal social order and new power struggles result. Weird Space is a shared world space opera featuring high-stakes adventure. In Weird Space: The Baba Yaga by Eric Brown and Una McCormack, the growing fears of the alien race known as the Weird has ramped up the paranoia and authoritarian nature of the ruling government. After protesting and being driven out of the intelligence bureau, a woman looks for the rumored world where humans and the Weird live together peacefully. S. K. Dunstall's thought-provoking debut novel Linesman takes place in space, too. Here, a mysterious alien ship is discovered at the edge of the galaxy and all of the major galactic powers want to uncover its secrets. Finally, Nova by Margaret Fortune features a woman genetically engineered to be a human bomb specifically designed to blow up a space station, but her countdown clock stops just two minutes before the end—a glitch that gives her a chance to learn what it means to be human.

If steampunk is more to your taste, consider the action-packed The Clockwork Crown by Beth Cato. In this steampunk fantasy, a woman embarks on a quest to fully understand the nature of her magical transformation. The Iron Assassin by Ed Greenwood presents an alternate steampunk history where Victoria never ascended to the throne. Here, a young inventor has created a reanimated, clockwork-enhanced corpse to defend London. In James P. Blaylock's Beneath London, intrepid steampunk-era explorer Langdon St. Ives sets out to examine a newly discovered underground realm of the city, only to learn that a brilliant and wealthy psychopathic murderer will do anything to keep it a secret. Finally, there's The Singular & Extraordinary Tale of Mirror & Goliath by Ishbelle Bee. (As if that title wasn't excellent on its own, it's subtitled From the Peculiar Adventures of John Lovehart, Esq., Volume 1.) Here, a girl named Mirror, who was locked inside a clock by her strange grandfather along with her shape-shifting guardian, washes up on the shores of Victorian England where the demon lord of the underworld sees Mirror as the key to eternal power.

Speaking of alternate worlds, The Fold by Peter Clines revolves around a secret project undertaken by the Defense Advanced Research Projects Agency. The so-called "Albuquerque Door" is a teleportation device that might just lead to alternate worlds. In The Long Utopia by Terry Pratchett and Stephen Baxter, humanity continues its exodus to the many Earths to which it has access, but learns that the inhabitants of alien planet intend to take over the many Earths.

If that confrontation aspect appeals to you, so might some military science fiction stories. The first of my two go-to titles this moth are The Red: First Light by Linda Nagata, in which a squad of high-tech soldiers led by an artificial intelligence in a for-profit war are being secretly recorded for a reality TV show. Virtues of War by Bennett R. Coles follows Lieutenant Katja Emmes, assigned to the fast-attack craft known as Rapier, as she investigates weapons smuggling activity between the two Terran colonies of Sirius and Centauria, a blatant act of rebellion that will lead to war.

But wait! There's more! A nice selection of multi-author short fiction anthologies and single-author collections will help round out your reading this month. Look at these beauties:

o  Stories of the Raksura: Volume Two: The Dead City & The Dark Earth Below by Martha Wells

o  The Change: Tales of Downfall and Rebirth edited by S. M. Stirling